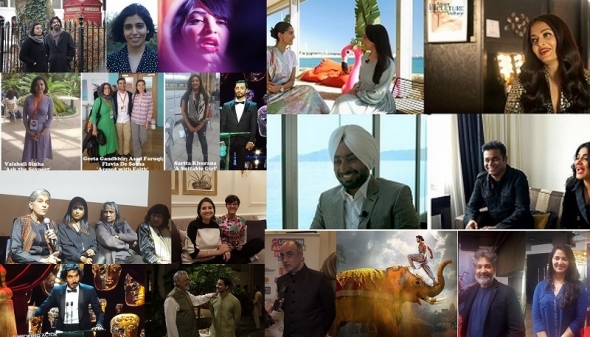 OUR FIRST substantial story of the new year was a sad one – Om Puri left us on January 6 2017.

The actor had a long career both in the UK and Bollywood and spoke to www.asianculturevulture.com on the telephone when he was last in London.

That was back in September 2016 and promoting the first Pakistani film he had been involved with – ‘Actor-in-Law’ in which he plays the father and much respected lawyer figure of a son who eschews the legal profession and dreams of being a movie star. Events make that character turn to the law…it’s an entertaining and enjoyable social comedy and Puri plays his character with all the grace and charm you would expect of one of the really great professionals.

At that point, no one had seen his role in ‘Viceroy’s House’. British director Gurinder Chadha reminded us what we had all lost.

The interview with Puri and the tribute story is here http://asianculturevulture.com/portfolios/om-puri-on-not-retiring-working-in-the-uk-bollywood-and-pakistan/

Awards season begins in earnest in the early part of the yearwith nominations announced – it all looked so rosy for Patel and Ahmed (our boys stateside and doing the business in ‘Lion’ and the TV smash ‘Night of’, respectively and both getting nominations in the Golden Globes. Alas, neither triumphed there.
http://asianculturevulture.com/portfolios/golden-globes-2017-riz-ahmed-dev-patel-miss-black-america-fares-better/

However, as we know there was joy for both later… Patel won a BAFTA for best supporting actor for his role in ‘Lion’and much later, Ahmed also created history after getting an Emmy.

We carry the first substantial news about Gurinder Chadha’s epic Partition drama, ‘Viceroy’s House’; a release date is set in March for the UK and its premiere with its starry cast were set to unveil the film at the Berlinale the following month. We’ve added our interview with Chadha to this old story (We were actually off-line for a short time during February and March 2017). http://asianculturevulture.com/portfolios/gurinder-chadha-film-viceroy-house-headed-world-premiere-berlin/

Bollywood superstar Hrithik Roshan aimed to redeem himself in ‘Kaabil’ after the disappointment of ‘Mohenjo Daro’ (it flops). Our reviewer Suman Bhuchar found Roshan in fine form and pretty much everything about this film was decent except the finer points of the plot. Nevertheless, who doesn’t occasionally enjoy a revenge drama??? http://asianculturevulture.com/portfolios/kaabil-blind-dish-best-served-cold/

WE were actually offline for a short while as we switched hosts and encountered technical issues in the switch.

But service continued on our FACEBOOK page and our film section was dominated by the London Asian Film Festival (LAFF, previously Tongues on Fire). It was a tremendous thrill and honour to announce that we had been nominated the official digital media partner.

Just before the festival began, Chadha’s ‘Viceroy’s House’ was in cinemas from March 3.

The festival (March 9-19 London) itself had a wide range of films on offer and kicked off with a Partition weepie, ‘Mango Dreams’. Debutant filmmaker American John Upchurch stole hearts with Naseeruddin Shah, Pankaj Tripathi and Ram Gopal Bajaj turning in brilliant performances and getting the festival theme of ‘borders’ off to a tremendous start.
We were there and acv special presenter Attika Choudhary talked to the leading lights of the festival in a live Twitter broadcast. Watch here. https://www.periscope.tv/asianculturevul/1kvJpndyXPbKE

There was quite the hullabaloo over LAFF’s ‘Lipstick Under My Burkha’ – it got a ban (in practice in India) when the certification board said it was simply ‘too women-orientated’ and explicit. By western standards, the film was quite tame and Lipstick did get a release later in India and proved to be a hit, even though it was a budget production with no recognised (Bollywood) stars. Leading lady Ratna Pathak (well known in theatre and wife of Naseeruddin Shah) did make it to London and said the film could do without the fuss – but it enjoyed global attention because of it.
While this was published a bit later it contains the links – including a live Twitter broadcast of a sample of the Q&A that followed its screening at LAFF.
http://asianculturevulture.com/portfolios/lipstick-under-my-burkha-comes-back-to-britain/
Here’s our video of the glitzy closing gala event and awards ceremony.. Art Malik, Gurinder Chadha and Naughty Boy were among the guests…

And here’s the wrap story… http://asianculturevulture.com/portfolios/laff-2017-award-winners-sabiha-sumar-kalki-koechlin-newfilm-chadha-om-puri/

At the end of the month, we were back on line and saw the intriguing ‘Signature Move’ at the BFI Flare (March 16-26), which showcases the best of queer cinema globally. A lesbian chick flick (crudely speaking), set in Chicago, it included Shabana Azmi and writer-director Fawzia Mirza in the lead role. Funny, poignant and culturally astute, Mirza showed a deft hand for cultural cross currents. Her main squeeze in the film is of Mexican origin and the similarities between the two cultures were neatly articulated. http://asianculturevulture.com/portfolios/signature-move-third-culture-comes-focus-bfi-flare-closing-gala-film/

There was also a chance to discuss the state of Indian cinema with respect to the LGBTQ+ angles with Sridhar Rangayan, the man behind the ever blossoming Kashish Mumbai International Film Festival. http://asianculturevulture.com/portfolios/bfi-flare-2017-south-asian-lgbtq-films-coming-age/

It wouldn’t be April without an April’s Fools now would it? Some folks got on social media wanting to know more… 🤣
http://asianculturevulture.com/portfolios/major-bollywood-shakespeare-production-head-uk/

Just two days later, the British Film Institute (BFI) announced that it was hosting a season of films from India, ‘India on Film’. We were there when Bollywood/Hollywood star Anil Kapoor dropped by to help with the launch alongside music star Anushka Shankar and BFI head curator Robin Baker. Curator Meenakshi Shedde from India gave us an insight into which films and why.
http://asianculturevulture.com/portfolios/india-film-bfi-preview-interview/

Top Indian film critic Anupuma Chopra was in London with her teenage daughter Zuni who had just released a novel, ‘The House That Speaks’; the controversy over ‘Padmavati’ was just gathering pace – they were still filming the Sanjay Leela Bhansali grand production which has come under fire from right-wing groups for re-writing what they say is ‘history’. The arguments and threats continue. Chopra said the climate for filmmakers wasn’t great – her assessment was spot on, things have got worse.
http://asianculturevulture.com/portfolios/anupama-chopra-bollywood-is-an-art-form-and-ipoliticians-does-not-understand-its-soft-power/

It was announced that ‘Baahabhuli: The Conclusion’ was coming to London as part of its plans for global domination. More seriously, the film which had already done spectacularly in 2015 delivered stupendous figures in 2017 with its final instalment and director SS Rajamouli, and Anushka Shetty and music supremo MM Keravaani came to the BFI for a special screening and Q&A. The interviews with those three and producer Shobu Yaarlagadda are here http://asianculturevulture.com/portfolios/baahubali-team-comes-london-director-ss-rajamouli-star-anushka-shetty-global-smash-film/

Just before that there was a release of an unusual romcom – ‘Finding Fatimah’ delved into the trials and tribulations of a divorced Muslim man looking for love a second-time round. A little rickety around the edges, Danny Ashok in the lead role, ably complimented by Asmara Gabrielle and supported by experienced hands such Nina Wadia showed there is some life to what has become a clichéd genre for the most part. Read what Wadia and Gabrielle had to say for themselves http://asianculturevulture.com/portfolios/finding-fatimah-nina-wadia-still-seen-as-brown-folks-not-enough-as-talents-as-stereotype-busting-romcom-hits-screens/

There is much speculation now as to whether we will see Bollywood babe Priyanka Chopra in these parts (ie the UK). It’s been a while, PC. But Meghan’s wedding, yes that Meghan – means she is in the running to be maid of honour. The two are reported to be good friends. In April this year, PC was gearing up for the publicity for ‘Baywatch’, her first Hollywood film appearance. The movie itself tanked but PC came through it unscathed and will be in at least two Hollywood productions in 2018/19. http://asianculturevulture.com/portfolios/priyanka-chopra-new-baywatch-trailer-release-update/

There was sad news out of Mumbai – another great icon from another Bollywood age had succumbed. This time it was Vinod Khanna.
http://asianculturevulture.com/portfolios/vinod-khanna-obituary-personal-uk-reminiscences/

Into the full swing of May, and that means only one place and only story in town. Cannes. Music supremo AR Rahman made his debut, not quite officially, but the producers behind ‘Sangamithra’ know their way around the Croisette.

Always regal in her own way and marking 20 years of L’Oreal Paris and 15 years since the screening of ‘Devdas’ (with Shah Rukh Khan) in Cannes, was Aishwarya Rai Bachchan. Shot at the cosmetic firm’s new studio on the beach and at night – as ‘Devdas’ screened to a hand-picked audience next door – there was something different about the atmosphere. Dazzling in a very old school sort of way… (and shot in 4K, a first for us).

We were there for Ash’s highly personal introduction to Devdas and caught her before she took to the stage.
The Twitter teaser…

For those of you…you know…coming in full soon…what a #filmstar does in a quiet moment… pic.twitter.com/dQDq7ZOCMp

A certain cricketer, a demi-god in some ways, made it to the big screen. ‘Sachin: A Billion Dreams’ was a cute documentary about India’s greatest cricketer of all time. Director James Erskine talked about the making. http://asianculturevulture.com/portfolios/sachin-a-billion-dreams-ducking-the-bouncers/

Debutant director Sadia Saeed made a splash with ‘Arifa’

Half-way into the year and along came something very different in style and temperament – though at first it resembled an Asian chick flick.
Sadia Saeed’s directorial debut, ‘Arifa’, was original and arresting and darkly comic in places. Let’s hope she gets behind a camera again.
http://asianculturevulture.com/portfolios/arifa-lets-talk-daddy-other-man-you-might-want-to-love/

Up we went to Sheffield Doc Fest – and there we found riches both from India and Pakistan.
All the talent behind the camera was US-based but the subject matter varied greatly – the India shot films were all about love, relationships and sex. The ones from Pakistan were about politics, terrorism and statehood. Read http://asianculturevulture.com/portfolios/sheffield-doc-fest-2017-love-war-skirmishes-betweenoverviewwrap/

BBC presenter Anita Rani was also there to unveil her work in ‘Partition’. The actual work was not broadcast till October but we got a sneak preview http://asianculturevulture.com/portfolios/family-partition-india-1947-first-look-bbc-programme-uncovers-personal-partition-stories/

At the tail end of June, the London Indian Film Festival (June 22-29) rolled into town and we captured the opening here

In the summer’s honours list, four Asians involved in the arts found themselves the centre of attention – among them was London Asian Film Festival founder and director Dr Pushpinder Chowdhry. http://asianculturevulture.com/portfolios/queens-birthday-honours-list-2017-south-asian-art-honourees-give-reaction/

While LAFF had Lipstick, LIFF had ‘Sexy Durga’ or ‘Sexy D’ (as it came to be known in India itself) – the award-winning film went onto face a ban in India, purely because of its title. Filmmaker Sanal Kumar Sasidharan took the battle to the courts after the film was dropped from the International Film Festival of India (IFFI) programme in November. The arguments go on but about the film itself… a non-conformist masterpiece? You decide… http://asianculturevulture.com/portfolios/liff-2017-closing-sexy-durga-is-edgy-thriller-horror-flick-not-final-awards-and-final-wrap/

Privacy & Cookies: This site uses cookies. By continuing to use this website, you agree to their use.
To find out more, including how to control cookies, see here: Cookie Policy
← Rishi Kapoor heading to London for London Film Festival (#LFF)? And other Indian films and one Sri Lankan feature on the way too..
Edinburgh Fringe Festival closes today – our video interviews and films on one page… →