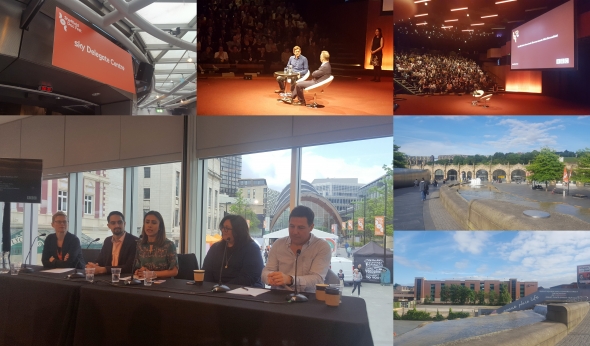 THERE were a clutch of features from South Asia at this year’s Sheffield Doc Fest.

Widely regarded as the place in Europe to premiere a documentary film, the fest had its own India Focus – and www.asianculturevulture.com managed to interview the filmmakers whose stories are from India – ‘Ask the Sexpert’ and ‘A Suitable Girl’.

We also got to interview the makers behind two films whose roots are in Pakistan.

What they all had in common was that they are all US productions, with the filmmakers all based in New York.

There was a world premiere for ‘Insha’Allah Democracy’ and Oscar winner Sharmeen Obaid-Chinoy is the producer behind ‘Armed with Faith’.

What was interesting to note is that both the India documentaries deal with love, marriage, sex and relationships, while the ones from Pakistan deal with war, terrorism and politics.

It’s just an observation – but perhaps indicative of what is most troubling the people of both nations.

All the films are good, watchable, entertaining, informative, revealing and in the case of both Pakistani films, very powerful.

That isn’t to say either ‘A Suitable Girl’ or ‘Ask the Sexpert’ don’t pack a punch, but perhaps the questions they ask are a little more abstract and philosophical and don’t have immediately blatant political implications.

For any student of Pakistani politics, ‘Insha’Allah Democracy’ is a must watch, while ‘Armed with Faith’ continues to tell the untold and unjust story about the so-called ‘war on terror’.

We sincerely hope that all four films will find their way to the wider UK public, whether that be theatrical distribution, film festival screenings or even TV broadcasts.

Away from the South Asian content, there was also a first chance (in Europe) to see ‘Whose Streets?’ about the shooting of a young black man, Michael Brown, in the town of Ferguson and the subsequent fall out that led to further unrest and trouble.

Filmmakers Sabaah Folayan and Damon Davis have made an eloquent film which deserves to be seen widely and has much added relevance in the wake of the terrible Grenfell Tower fire here in the UK. About poor communities looking for justice and a testament to a spirit of community and activism, it has important things to say to those who hold power everywhere.

On a lighter note, documentary filmmakers Louis Theroux and Nick Broomfield (premiering his ‘Whitney – Can I be Me?’ film at the fest) were in splendid form in the BBC Interview on Sunday (June 11) and it was a reminder that Broomfield’s rather unique style when he started is now much copied (watch ‘Insha’Allah Democracy’ and you will see the filmmaker in his own film).

On the same day and already covered (here) was the BBC’s unveiling of its flagship documentary programme, ‘My Family, Partition and Me: India 1947’).

A high-powered panel from the programme revealed the challenges of making essentially four stories which are deeper and more introspective versions of the popular beeb programme, ‘Who Do You Think You Are?’ and made by the same production company. Look out for more on this nearer the time.

Also in attendance was Indian filmmaker Anand Patwardhan, who was serving on the main jury (for the awards go here). A veteran and something of a legend, his magisterial ‘Jai Bhim Comrade’ (2011) – 14 years in the making – is one of the greatest documentaries you could ever see.

It was our first visit to Sheffield Doc Fest and the festival is warm, friendly and well organised. The enhanced security was a bit of a pain (cursory bag checks) and so soon after Cannes – (with the same bag checks everywhere -) reminds us that in some small ways the terrorists have defeated us – the whole city of Sheffield no longer has a left luggage facility. Grrh!

Our stories from Sheffield…

‘A Suitable Girl’ – Love and marriage the Indian way…

‘My Family, Partition and me: India 1947’ – First look at BBC programme that uncovers personal Partition stories

Preview and some the films sadly we couldn’t we were not able to cover...

Privacy & Cookies: This site uses cookies. By continuing to use this website, you agree to their use.
To find out more, including how to control cookies, see here: Cookie Policy
← UK Asian Film Festival 2018: Glittering launch event on the Red carpet: Mahira Khan, Amy Jackson, Simi Garewal and others…
‘A Passage to India’, Asif Khan talks about role and burgeoning career as actor, writer, playwright and producer – who also has Channel 4 writing bursary →