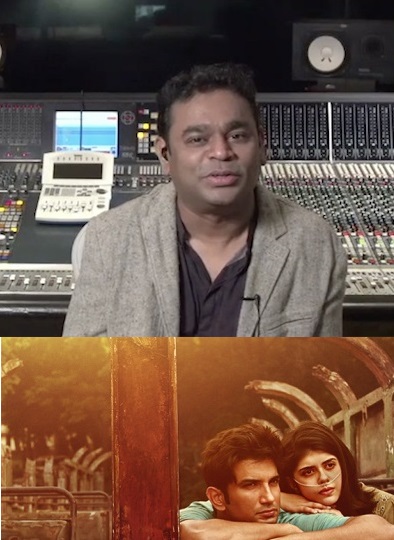 🎼 Burden of expectations already high because of Hollywood film

🎼 Tests quality of tracks by listening to them in his car

He said there was enough pressure with the film having been a success in the West already.

Rahman didn’t feel the death of the Bollywood film’s lead exerted any more pressure than he already felt.

He also said debutant director Mukesh Chhabra, who is a well-known Bollywood film casting director, had faith in him despite possibly hearing on the industry grapevine that he wasn’t the best person for the job.

An adaptation of the novel ‘The Fault in our stars’ (2012) by John Green and turned into a successful Hollywood film with the same title and starring Shailene Woodley and Ansel Elgort, Rahman was commissioned with creating the Bollywood film’s music.

Singh was found dead last month at his home in Mumbai and the authorities stated that he had been suffering from depression and had taken his own life.

A journalist at the Sony Music India Zoom press conference, with Rahman speaking from his studio in Chennai, this week, asked if Singh’s death had meant more pressure for the music composer, who shot to fame in the West following an Oscar for ‘Slumdog Millionaire’ (2008).

Rahman had finished work on the music for ‘Dil Bechara’ last year, but the “luxury of lockdown” as Rahman said himself, saw the film’s release being put back and the composer had time to rework some of the score.

He said: “It was a hit movie in Hollywood.

“Whenever you take something which is very successful and yet so very delicate and got so much heart in it, it actually triggers the whole experience of creativity and pushes you to write a score like that.

“This is an interpretation according to our culture and it was a pressure but a good pressure.”

Rahman also revealed that he felt he was a victim of bad mouthing in Bollywood.

“There are a lot of myths, everyone in the industry saying, don’t work with AR, he will give the score to you late but he (Chhabra) didn’t feel like that.

“I am grateful for him coming to me, stories come out and they turn into something else and become so untrue.

The film which has been widely anticipated in India following Singh’s tragic demise, dropped on the Indian streaming platform, Disney Hotstar, for free, yesterday (July 24) evening. (You should be able to see the film for free from your country – see the link below for the UK.)

Tracks from the album and the corresponding film music scenes have been released on Youtube and social media over the last week or so and the album went on sale from July 10.

It has been enthusiastically received and has topped the charts in India and some of the music videos from ‘Dil Bechara’ have had more than 50 million views on Youtube.

Responding to a question from www.asianculturevulture.com about how important it was to have a strong relationship with the film’s director, Rahman said it was good to know the person behind the project.

He reeled off a roll call of some of the biggest directors in India, and paid special tribute to the man who introduced him to the film world, Mani Ratnam.

He was already a well-established director in Tamil cinema and gained both national and international recognition for his work when he got Rahman to work on the film, ‘Roja’ in 1992.

Rahman said: “He has been a great mentor for me. He wanted to display the best of me and I spent a lot of time with him in the studio.

“He used to play me things – symphonies, the opera Carman – it’s not just about music, it’s talking about philosophy, other films and common interests.

“Mr Chabbra, if he didn’t like it, he would say, he didn’t want Punjabi sounding music and there were some dos and don’ts,” revealed Rahman about his working relationship with the director.

Earlier he said that the track, ‘Taare Ginn’ had gone back and forth a bit and only when it sounded good in the car could he feel satisfied.

“It’s the ultimate test – everything has to stand that test,” reflected Rahman.

Moderator and broadcaster Tommy Sandhu marvelled at the thought.

“I just love the idea that you have access to all these amazing studios, but the real testing is done in the car on the way home?” Rahman smiled in acquiescence.

He praised Chhabra for allowing him the freedom to be creative and tap into the deep emotions on screen – both lead characters are young and have terminal cancer prognoses.

He said he wanted the music of the film to reflect both the romance and the melancholy.

Rahman also paid tribute to the great Hollywood music composer, Ennio Morricone, who died earlier this month. The Italian composed over 400 film scores and is best remembered his work on ‘The Good, the Bad and the Ugly’ (1966) and won an Oscar for Quentin Tarantino’s ‘The Hateful Eight’ (2016).

“I met him in Rome a couple of years back, it was very good. He was very kind.”

He also mentioned Western music composers John Williams (‘Star Wars: Episode IX: The Rise of Luke Skywalker’) and Hans Zimmer (forthcoming Bond film, ‘No time to die’) when asked about music directors who had influenced him.

Privacy & Cookies: This site uses cookies. By continuing to use this website, you agree to their use.
To find out more, including how to control cookies, see here: Cookie Policy
← ‘Death of a Salesman’ – Brilliant, immersive poetic meditation on the failure of the American Dream…
Our own events in 2019: ‘Ek Aasha’ reception at UK Asian Film Festival and ‘Sir’ reception at London Indian Film Festival →