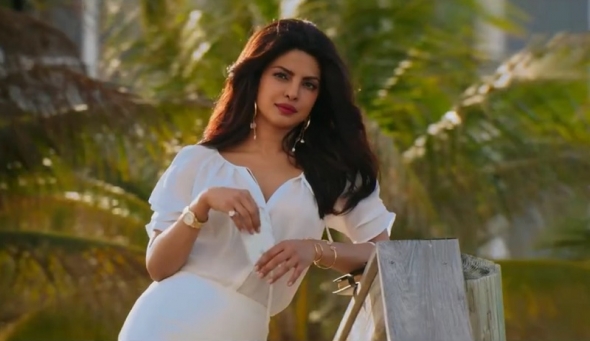 A new trailer featuring the Bollywood babe in her first Hollywood film has just been released.

She plays baddie ‘Victoria Leeds’ (colour-blind casting?) in the new ‘Baywatch’ film which hits screens on May 29.

There has been much speculation as to just how much Priyanka features in the film alongside Hollywood star Dwayne Johnson (aka ‘The Rock’) and Zac Efron.

Leeds owns a nightclub and clearly has some criminal designs on the Baywatch area.

As the trailer suggests lifeguards Mitch Buchanan (Johnson) and Matt Brody (Efron) smell something and go undercover to find out exactly what the evil female mastermind is up to.

Chopra has become a huge star in the US, winning two People’s Choice Awards in consecutive years for the US ABC produced primetime cop drama, ‘Quantico’.

She is currently at her home in Mumbai, and has just done a Facebook Live interview (see below) with Facebook in Mumbai. It’s long – just under an hour.

Last night, she marked her success as a film producer.

Her debut film, behind the lens so to speak, is a family comedy drama made in the language of Marathi (the local one spoken in Mumbai and the state of Maharashtra). It charts the story of an elderly man, the head of a large and extended family, who falls ill just before the major festival of Ganesh Chaturthi.

Released in 2016, it was a critical and commercial success and was handed three 2017 National Film Awards – for best director, best editing and best sound mixing.

Thank you to my @purplepebblepictures team and everyone who contributed to #ventilator and all my mad endeavours .. The cast ,the crew ,our partners ,the media..Thank you all for coming out so strong tonight. We cried we laughed and just made merry.. my gorgeous and incredible team. Without who nothing would be possible and my formidable mother @madhuchopra you are my rock partner! Here's to many more by gods grace… ❤️❤️❤️💪🏽😎🙌🏼

Among the lead actors is Ashutosh Gowariker, a director of international renown for his Oscar-nominated ‘Lagaan’ and who spoke to us last year about his film, ‘Mohenjo Daro’.

But Chopra’s most recent post (this morning UK time) to Instagram is about the ‘Baywatch’ trailer release. She also indulged in some banter about the trailer with co-star Johnson on her Twitter.

This trailer looks like it’s only been released on social media to date.

Last year, we reported on how PeeCee, as she is known in some circles, made a Youtube (YT) comedy skit with YT star Lilly Singh.

(Singh, aka Superwoman, has just released her first book, ‘How to be Bawse’ and has just finished promoting it on a world tour with whistle stop appearances in the UK and India and doing only the BBC or similar media for it).

Seriously? Just Look at me….. you think I'm gonna be intimidated by a bunch of swimsuit calendar alumni? Especially your chiselled,deadly,sexy A@$ and Giant biceps?!! #BeachPlease Just stay out of my way. #AintNoTsunamiGonnaStopVictoriaLeeds #BeBaywatch #VictoriaLeeds#Repost @therock with @repostapp ・・・ Our #BAYWATCH team of superheroes has one mission: Protect the beach at all costs. If you threaten our turf, we'll rock your world w/ Poseidon-level vengeance. Be warned @PriyankaChopra..our tsunami of ass whup is coming for that powerful, sexy, alluring, luscious.. never mind.. just don't f*ck with the Avengers of the Beach. @BAYWATCHMovie MAY 25th. #TrustYourBalls #TheyNeverLie

To see in full screen