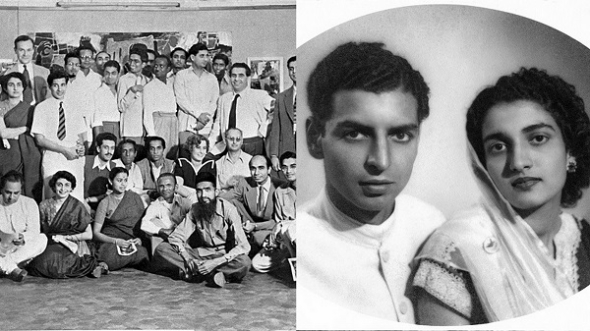 Film is intimate inside portrait of famous house and Kekoo and Khorshed Gandhy’s remarkable artistic legacy, as told by one of the couple’s daughter’s Behroze and www.asianculturevulture.com is extremely proud to be promoting this film…

DESCRIBED as a something of a love letter to the people and the city of Bombay/Mumbai, and screening as a world premiere in London at the UK Asian Film Festival (May 4-15) is the extraordinary documentary, ‘Kekee Manzil: House of Art’.

This film – made by UK-based filmmaker Dilesh Korya and produced by filmmaker, writer and narrator, Behroze Gandhy, whose family owned the Kekee Manzil House – charts the birth of modern art in India. The house was named Kekee Manzil shortly after Kekoo’s birth by Behroze’s grandfather.

Arguably, Kekee Manzil helped to launch the careers of some of the most brilliant Indian artists of the last century and beyond – among them MF Husain, Tyeb Mehta, SH Raza, FN Souza, Vasudeo Gaitonde and Krishen Khanna.

Just as the film looks at the role of the house owned by the Gandhy family in Bandra, in developing these artists, it also opens a wider canvas on the stirring social and political movements of the day – and gives a unique and arresting insight into wider Indian cultural and social history.

Centred around Kekoo who stumbled into being a patron of the arts and running a hugely successful commercial framing business, Chemould Picture Frames, this film weaves an important narrative.

With Mercury Prize winning musician Talvin Singh composing the background score, ‘Kekoo Manzil: House of Art’ is a fitting tribute to Kekoo and Khorshed Gandhy and the artists they came to befriend and support and the wonderful legacy they have bequeathed India and the world.

The film constructs an engaging and absorbing narrative, mixing past interviews with new ones and previously unseen archive footage, family cine film and old photographs, to a give a vivid portrait of a family, a city and a country, emerging from the dark shadows of colonialism into something brighter, more optimistic and inescapably modern and cosmopolitan.

Novelist Sir Salman Rushdie’s own narration of ”he Moor’s Last Sigh‘ about that part of Bombay can be heard in this film too.

World renowned British artist Sir Anish Kapoor, who was born in Bombay and spent his childhood and early years there, recounts the impact Kekoo Manzil had on the artistic life of the city.

He is just one of the many leading voices to paint an intriguing picture of what was going on at Kekee Manzil.

The world premiere of this film will take place on Sunday, May 8 at Regent Street Cinema at the heart of London’s West End.

It will be a hugely poignant moment for Behroze Gandhy as she told www.asianculturevulture.com: “The screening of Kekee Manzil – House of Art’ at the Regent Street Cinema marks a poignant moment. Two journeys in opposite directions have come full circle.

“From London to Bombay over nearly two decades to record the fast fading memories of the early Indian contemporary art movement. And in the other direction nearly 50 years ago when I travelled from Bombay to London to study film and media at the Regent Street Poly (now the University of Westminster) on the very site where the South Asian Film Festival is showcasing this film.”

There will be a Q&A following the screening, with Professor Rosie Thomas of the University of Westminster and an expert on India cinema, talking to Gandhy, Korya and Singh and others.

www.asianculturevulture is hugely proud to be supporting the screening of this film at the UK Asian Film Festival and expect moreon it in the coming week on our social media channels.

(For listings and ticket information, please see below or click here)

The UK Asian Film Festival (UKAFF) opens on Wednesday (May 4) with the banned Pakistani film and world premiere of ‘Javed Iqbal: The Untold Story of a Serial Killer’ at the BFI Southbank in London.

Iqbal was convicted of sexually abusing and murdering more than 100 boys in Lahore but just two years into his sentence, he was reported to have committed suicide. It is believed he was simply part of a wider network of paedophiles operating in the city. Actors Yasir Hussain and Ayesha Omar will attend and introduce the film which will screen at the BFI Southbank.

Director Abu Aleeha has adapted his own novel ‘Kukri’ and the film is also based on actual testimony from the Iqbal’s trial. There are other screenings of the film at other locations as UKAFF films screen around London and Birmingham, Leicester, Coventry, Warwick, Bradford, Stockton, and Glasgow.

The theme of the festival this year is Dare to Dream, as both India and Pakistan mark 75 years of Independence from British colonial rule.

In keeping with the festival’s original creation as Tongues on Fire with strong feminist leanings – and a festival that spotlighted women filmmakers primarily, the festival will close with the UK premiere of ‘Gangam Girls’ on Sunday afternoon (May 15), again at the BFI Southbank.

The film is about four women who grow up in the mountain kingdom of Bhutan and nurture and support each other in the pursuit of their dreams. Director Nemchand Chheda will be in attendance, as will be producer Nyema Zam. Following the screening the Tongues on Fire Flame Awards will be presented.

‘Rehana’ which was originally titled, ‘Rehana Maryam Noor’ enjoyed its world premiere at the Cannes Film Festival in July and www.asianculturevulture.com reviewed it – see here).

This is a hard-hitting, no bar exploration of sexual harassment at a medical college in Dhaka, where Rehana takes up the case of a student who has been abused by a senior male colleague and friend. Abdullah Mohammad Saad’s film is intense with a superb central performance from rising South Asian and Bangla star Azmeri Haque Badhon. ‘Rehana’ screens on Thursday evening (May 5), at Genesis in east London.

Another film acv also has covered ‘Dostojee’ (‘Two Friends’) at its world premiere, returns to the UK after screening at the London Film Festival. ACV interviewed director Prasun Chatterjee – (see this here).

It’s a charming film, poignant and delicately constructed and worthy of the rich humanitarian tradition inspired in Bengali and world cinema by the immortal Indian director Satayajit Ray. Well worth seeing.

Director Rahul Jain’s Cannes Film Festival climate special, ‘Invisible Demons’ will be screened at UKAFF at Rich Mix in London on May 11. Jain spoke to acv just after the film’s world premiere at the Cannes Film Festival last year. It’s a searing exploration of environmental degradation in Delhi. See the interview – here)

On Saturday next week (May 7) there is a special Climate & Young Tongues on Fire event with children and students invited to attend Rich Mix for the screening of short puppet-animated, ‘Priya and The Twirling Wand’ – as India’s first superhero dedicated to fighting climate change enters the fray.

Other highlights include ‘Muthayya’ – a film in Telugu which is about a 70-year-old man trying to break into cinema as an actor. It’s directed by Bhaskhar Maurya.

There’s a Sri Lankan Tamil film, ‘The Single Tumbler’ and is described an intimate portrayal of Tamil society in the North of the country and the fissures that led to a long protracted civil war and the deep scars that still remain.

Classic ‘Mughal-E-Azam’ will also be screened in the festival as a K Asif’s masterpiece comes as a digital restoration.

There are also a series of shorts and features in the festival’s LGBTQ+ strand with the Canadian ‘Out of the shadows’ and a world premiere for ‘Temple’ as two South asian friends find solace amidst the prejudice of British heteronormative society.

Among the special events is the chance to see Sudha Bhuchar’s ‘Evening Conversations with Sudha Bhuchar’. The founder of Tamasha and actor (in Riz Ahmed’s feature, ‘Mogul Mowgli’ & Oscar winning short, ‘The Long Goodbye’) Sudha opens us up to a young generation – her dual heritage sons – whose idea of culture and identity differs somewhat from her own. A beautiful, entertaining, funny and insightful night of banter and warming and poignant reminiscences. Well worth experiencing. It is on Tuesday evening, May 10 at Rix Mix, Shoreditch. (See Booking info below)

To see the full UKAFF programme and booking info: https://www.tonguesonfire.com/events

www.asianculturevulture.com is extremely proud to be hosting a reception for the filmmakers of ‘Kekee Manzil: House of Art’ and a few guests at Regent St Cinema on Sunday, May 8.

Privacy & Cookies: This site uses cookies. By continuing to use this website, you agree to their use.
To find out more, including how to control cookies, see here: Cookie Policy
← ‘East is East’ – A modern classic that remains as powerful and relevant as it was 25 years ago when it first hit the theatre, says director Iqbal Khan…
Bollywood asianculturevulture vibes: ‘Bell Bottom’ kickstarts Bollywood and the Afghan connection weighs heavily on filmmaking community… →