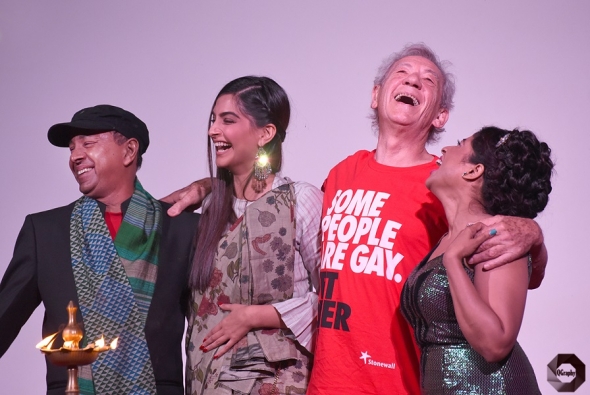 MORE and more Indians – especially the young in college – are receptive to films with gay themes, says the man who organises its largest annual festival of ‘queer’ films.

Sridhar Rangayan is the man behind the Kashish Mumbai International Film Festival and appeared with Robin Baker, the BFI’s head curator, for a special discussion on Monday (March 20) during its annual LGBTQ 10-day film festival – Flare which concludes this Sunday (March 26).

Among the South Asian highlights from the festival is the closing film ‘Signature Move’ featuring India icon Shabana Azmi and an Indian film called ‘Dear Dad’ that last screened on Sunday (March 19).

In ‘Signature Move’, Shabana Azmi plays ‘Parveen’, the mother of Zaynab (Fawzia Mirza), a woman who is seemingly without a man and despite being a lawyer, disappoints her mother. Set in and around South Asian neighbourhoods of Chicago – what Parveen doesn’t know is that Zaynab has fallen hard for the Hispanic Alma (Sari Sanchez). Director Jennifer Reeder and Mirza, who also has both co-writing and producing credits, are expected to attend the screenings.

Meanwhile, Rangayan told www.asianculturevulture.com: “KASHISH has become a celebrated annual event in Mumbai’s cultural calendar and is not just a ‘LGBTQ film festival’.

“We recognise that are operating in a more liberal environment like Mumbai.

“So Kashish has several initiatives where take LGBTQ films across the country – our Best of Kashish film screening events have been held in conjunction with pride events in smaller Tier 2 cities.

“The Kashish Forward initiative is the first ever travelling campus LGBTQ film festival.

“We have already organised screenings at 20 colleges across India over the past two years. This has been received very well by students who are much more open minded and accepting of diversity.”

ACV was unable to attend the talk with Baker and Rangayan but we were able to catch up on email with the Mumbai film programmer just ahead of his BFI talk.

Rangayan confirmed that the general environment remained challenging in India. The Bharatiya Janata Party (BJP) government has restored section 377 which outlaws homosexual relations between men. There is no formal recognition of same sex female relations.

Despite the general climate, Kashish has continued to grow, and has, as Rangayan told us, become something of a social favourite.

Last year, Sir Ian McKellen, and Bollywood icon Sonam Kapoor gave their support to the fest. (Rangayan is left in the lead picture above).

“Every year our festival receives close to 50-60 Indian LGBTQ themed films out of which we programme of about 20-25 films, which is 15 per cent of the overall programming. Last year, we screened 182 films from 53 countries,” explained Rangayan.

The eighth edition will get under way this year between May 24-28.

Rangayan said in the beginning the quality of South Asian films left something to be desired, but nowadays the standards had risen considerably.

“Many of the films from the last couple of years push the edge of narrative and aesthetics quite admirably,” he added.

Last year, ‘Aligarh’, a film based on the true story of a professor based at the university, was critically acclaimed.

It premiered in the UK at the London Film Festival 2015. Director Hansal Mehta and screenwriter-editor Apruva Asani – a well-known campaigner – were widely recognised to have broken a mould by producing a film of subtle strengths with a powerful message about equality and discrimination in India.

Indie star Manoj Bajpayee plays the professor whose personal life is dragged into the spotlight with terrifying consequences.

It managed to get past the authorities because it wore its convictions lightly and wasn’t overtly political.

Rangayan is clear about what prevents more stories like ‘Aligarh’ coming forward.

“The mainstream shies away from this subject, unless there is a big star attached to the project.

“To add to this is the issue of censorship, with the Indian censor board which is meant to just rate the film actually censoring productions, imposing their own idea of morality.

“So the space that Indian LGBTQ films can negotiate is really constricted,” argued Rangayan.

He said he was careful to follow all the protocols and procedures, so the Kashish festival could continue smoothly.

He reckoned that about 75 per cent of the audiences were from a LGBTQ background and increasing numbers were not and it boded well – but without financial backing the festival was vulnerable.

“A lack of financial resources always puts a question mark on its sustainability. India needs a great dialogue on both censorship and support to alternative voices in cinema,” he outlined.

Several films not highlighted as gay-themed, featured during the BFI Flare Festival, including Cannes premiered Xavier Dolan’s ‘It’s only the end of the world’ and Korean Park Chan-wook’s ‘The Handmaiden’.

With ‘Moonlight’ – which has its last outing tomorrow (March 25) – a film about a young black man coming to terms with his sexuality, winning the Oscar for best film this year, it shows surely the world is changing…

For remainder of programme: http://www.bfi.org.uk/flare

To help Indian filmmakers, KASHISH not only offers a big-screen experience during the festival, but also facilitates their screening worldwide through its KASHISH Global initiative.
Kashish International May 24-28 2017
http://mumbaiqueerfest.com/