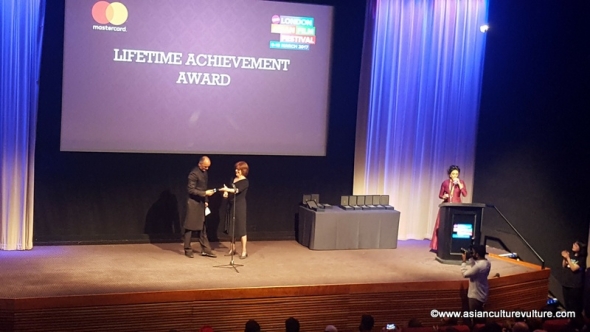 ART MALIK, one of Britain’s best known international actors, was presented with a lifetime achievement award by the London Asian Film Festival at its glittering closing gala awards ceremony and dinner at Bafta on Sunday (March 19).

Some 200 plus VIP guests also got a sneak preview of Pakistani filmmaker Sabiha Sumar’s next film, which is an exploration of identity, culture and religion as practised by ordinary Pakistanis and Indians and asks why the two countries have become more religious in recent times.

Sumar, who raised the finance for the documentary film through a crowdfunding campaign, also enlisted the help of Indian actor Kalki Koechlin and the two travelled extensively in both countries for the new film, ‘Azmaish‘.

In a Q&A with Indian journalist and author Shrabani Basu, Sumar revealed that the film explored why both countries were looking increasingly toward religion for their identities and asked people in both whether they were comfortable with that.

She said the for the first time she felt some trepidation and anxiety in India.

“I’ve been there many times but on this occasion, I was wary of saying I am a Pakistani.”

She expects her film to be complete next month – it is still in the final editing stages.

Koechlin, who was originally scheduled to attend the closing gala, but had to pull out because of falling ill with dengue, sent a video interview which was broadcast last night.

She told the audience why she wanted to get involved and revealed it had been a learning process for her.

After the Q&A, a dozen awards were presented in all and Sumar was among the recipients. She received a Tongues of Fire (the previous name of the London Asian Film Festival) special recognition award.

Cathy McCaul, president of global processing Mastercard, presented them all. Malik said he was hugely surprised by the award and took it as a gesture of encouragement to continue what he has been doing as an actor.

McCaul told the audience how proud she was to be associated with the festival and its aims of putting films from the margins centre stage.

She also told the audience that diversity and championing women had become part of the company’s DNA and the business case was irrefutable now.

The international nature of the film festival was well highlighted by the different award winners.

Taking home the Best Film Award was ‘Lipstick Under My Burkha’.

Controversially rejected for a screening certificate in India, it has proved a big hit at film festivals around the world – for the frank, and some would say, entirely fearless way filmmaker Alankrita Shrivastava has shown modern Indian womanhood.

Charting the dreams and ambitions of four women in small town India, in this case, Bhopal, she shows the pressures and torment some women have to endure. (For more on the film see the strory about the screening of the film on Saturday and the discussion that followed.)

One of the stars of the film renowned Indian actor Ratna Pathak Shah won ‘The standout performance award’ for her role in ‘Lipstick Under My Burkha’.

The audience choice award went to ‘Bazodee’ – an original mash up of Bollywood and Soca styles with British Sri Lankan lead Natalie Perera singing alongside established Soca sensation Machel Mantano in his first film role and carrying the comedy drama musical on her very capable shoulders. She and British Trinny actor Valmike Rampersad collected the award from McCaul.

Best director award went to Rahat Kazmi for his film ‘Mantostaan’. An adaptation of the great Urdu Partition writer Saadat Hasan Manto’s short stories, Kazmi weaves four different tales about the tragedy of a people’s separation into a single film of power and purpose. Actor and producer Tariq Khan and actors Shoib Shah and Sonia Seghal collected the award on behalf of Kashmiri but Mumbai-based Kazmi.

We have a video interview with Kazmi and others taken in Cannes last year when they took the film to the market there.

Utopia’s talent – actor Malalai Zikria, director Hassan Nazer and producer Chris Robb collected the award for best production. The film about an Afghan woman (Janan/Zikria) travelling to Scotland for IVF treatment is both original and compelling for the swirl of cultures and philosophies that inform it. Shooting in four countries (Scotland, Afghanistan, India and Tajikistan) was a challenge for a budget film, but the result is impressive and encouraging for the nascent Afghan film industry.

Also emerging from a still developing sector in Pakistan is ‘Rahm’ (‘Mercy’).

Directed by London-based documentary Emmy nominated Ahmed Jamal, the film is an adaptation of Shakespeare’s ‘Measure for Measure’ but set in contemporary Lahore, as a governor insists on a moral crackdown, despite being compromised by the splendorous beauty of a vulnerable woman (Sanam Saeed) who pleads for mercy in the shape of her condemned brother. Jamal collected the award for best adaptation.

Hotelier Jasminder Singh, the man behind the May Fair Hotel in W1 and a new one in Leicester Square was presented with an award for his contribution to arts, cinema and culture. His Edwardian Hotel Groups and the May Fair specifically play hosts to both the London Film Festival media events and London Fashion Week. Son Inderneel collected the award on his father’s behalf.

John Upchurch, the American debutant director of the opening film, ‘Mango Dreams’ was presented with a script award last week. In a video message shot last week at the opening gala in London, he said he was excited to tell his screenplay writers Mazahir and Hamza Rahim about the accolade.

Not to be outdone are the next generation of filmmakers. Areum Han took home the short film award for ‘Cryptid dir’. She said the award would help her to continue making films.

The audience heard filmmaker Gurinder Chadha present a touching tribute to the late Om Puri, whose last performance was in her latest film, ‘Viceroy’s House‘.
“I had wanted to work with Om for a long time,” she explained.

Before being able to raise the money to make her global smash hit, ‘Bend It Like Beckham’ (BILB), she revealed she had written to Puri requesting his support and agreement to play Jess’ the central character’s Dad.

“He was based on my own father, who had just passed away,” Chadha disclosed. “I wrote him (Puri), a very personal letter.”

However, Puri declined, saying he had just played another Asian father in Hanif Kureshi’s rather prescient ‘My son the fanatic’.

“But that was a Pakistani father,” Chadha countered. “This is a Punjabi one.”

Chadha, who was struggling to get backers for BILB found the rejection personally very tough – she had pinned her hopes on Puri, who was also of Punjabi heritage. In the end she did raise the money to make BILB and cast Anupam Kher, helping to launch the veteran Bollywood star’s career in the West.

Puri some years later told Chadha it was one of the biggest regrets of his life and encouraged Chadha to cast him in something else.

The opportunity came with “Viceroy’s House” – and he played a blind freedom fighter father.

“It was his last role and he was looking forward to seeing the final film,” said Chadha poignantly.

Last night’s BAFTA audience also watched digital commissions selected by LAFF and supported by the Arts Council, and enjoyed a sit down dinner, bringing the final curtain down on the 10-day festival in London.

A sister festival in Edinburgh begins on Thursday (March 23) with a screening of ‘Mango Dreams’.

Privacy & Cookies: This site uses cookies. By continuing to use this website, you agree to their use.
To find out more, including how to control cookies, see here: Cookie Policy
← London Indian Film Festival 2021: Asif Kapadia’s emotional in person tribute to actor Irrfan Khan at the BFI Southbank screening of ‘The Warrior’
‘Sherni’ – tad disappointing tale of Conservation Vs Development in Amit Masurkar’s Indian jungle tiger drama which has echoes of his brilliant ‘Newton’ →