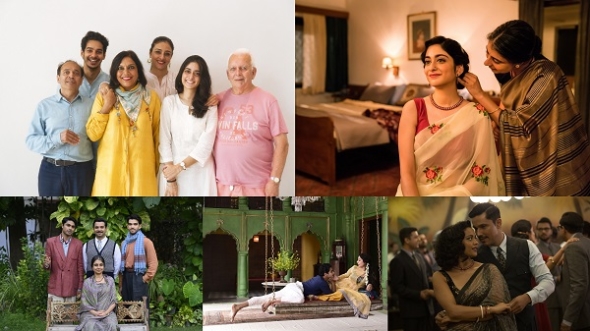 🎥 Mira Nair placed high emphasis on culture from which 1,300-word plus period novel, ‘A Suitable Boy’ by Vikram Seth has been inspired

🎥 Restoring linguistic balance of Hindustani, Urdu, Awadhi to a novel written in English

DIRECTOR Mira Nair has resolutely defended her decision to employ a near 100 per cent Indian cast for her first TV project.

The director of ‘Monsoon Wedding’ and ‘Mississippi Masala’ told a BBC digital press conference on Tuesday (July 21) for her forthcoming six-part BBC One TV adaptation of Vikram Seth’s 1950s novel ‘A Suitable Boy’, that she knew the British acting scene.

There has been criticism that she could have had a more British and international cast for a BBC production – there are three actors based out of India in this new drama.

The series is shot completely in India and she outlined why she thought it was important both to shoot exclusively there and have the cast she did.

She said: “I saw no reason really to look beyond India. I know British Asian actors in England very well, because I am just about to make Monsoon Wedding Musical on stage there.

“I have a pulse on Asian actors in England, but mostly I had to look within India.”

She pointed out that she did not completely ignore British Asian acting talent – and has cast Shubham Saraf and Mikhail Sen. Both play important characters.

Mahira Kakkar, known to readers of acv for her role in ‘Hank and Asha’, plays the mother of ‘Lata’ in this and is based out of New York, according to her own website. In all, there are 110 actors in the production.

Nair said she had originally thought about casting actors from Pakistan – but practical concerns (about getting work visas) stopped her from pursuing this.

She explained that authenticity was important, both in setting the drama in India and what the actors could bring to the script.

She was keen to stress how much the language is part of the story and that she could make changes to better reflect that.

“In all this, there is one very important point – I told everyone: I wanted to restore the balance of languages in ‘A Suitable Boy’, even though the novel is written in English,” Nair explained.

She said the culture of the time was also richly diverse in language, culture and faiths.

There is Hindustani dialogue in the drama and it is subtitled – but about 80 per cent remains in English.

She told the webinar that she had gone back to her first feature ‘Salaam Bombay’ dialogue writer, Hriday Lani for the non-English parts.

“The cast speak in Urdu/Hindustani/Awadhi, because of the place we are set – I restored, in part, that language – our languages to create a much more realistic, authentic and truthful universe.

“In fact, Vikram thanked me for translating it back to that – mixing (languages) is what we are like – then and now.”

Much of the drama is centred around central eastern India, in an area between Benares (Varanasi) and Patna and Kolkata (or Calcutta as it was in 1951).

They mostly shot in Lucknow, where Awadhi is spoken. The city is regarded as one of the centres of Islamic culture in India. Its influence on courtly culture of the 19th century should not be overlooked, as the city – and the surrounding area – was home to several princely kingdoms that patronised Indian classical music and art.

It is also an area where many Hindus and Muslims live side by side and often share the same language and similar customs, handed down through generations, especially in artistic practice, social etiquette and cuisine.

Nair enthused: “For me, it was very important to show how we are today because of what we were then – ‘A Suitable Boy’ is a mirror of our society and it is important to be truthful, authentic, colourful, mischievous – all these things. I had such great talent around me, who could take each one of these ideas further.”

She went onto to make what seemed like a political point – feeling that the plurality of Indian culture was waning.

Later she added: “It was very important for me to get the syncretism of Hindu and Muslim culture – the way we used to have it in 1940s and 1950s, the extraordinary friendship across religions and across castes – that is something we are actively obliterating now in today’s India.”

Nair went onto expand on the role of the music after one journalist suggested that the dialogue between ‘Saeeda Bai’, the worldly courtesan played by Tabu and the young, perhaps idealistic ‘Maan’, essayed by Khatter, would go viral.

Saeeda’s conversation is sprinkled with allusions to poets and she encourages Maan to learn Urdu (which phonetically is the same as Hindi, but the script is different).

Saeeda is a famed Ghazals singer – ghazals are form of poetic singing – with the words from poems forming the lyrics for songs about love and longing and The Divine. There are evocative music scenes in both Episodes 1 and 2. (Read our review to be published on Sunday)

“Music is my oxygen and is a big part of my wanting to direct ‘A Suitable Boy’,” said Nair.

“Saeeda Bai’s ghazals and what she sang are inspired by the poetry of Daagh, Mir and Ghalib (all revered poets) and that is in the novel.

“I also come from that tradition – in the sense that my father was from Lahore (Pakistan) before Partition and we grew up in an atmosphere of music and in all my films, I lean on it.”

Tabu, who is an iconic Bollywood actor, said: “Mira’s favourite part in any film is the music, the songs, the playback and the background, with Mira there has to be an echo of beautiful sounding people and lyrics and that really marks Saeeda’s character and so I am glad if that is the response.”

In the TV drama, the ghazals are created by well-known and popular Indian singer Kavita Seth – who has sung for Bollywood films and Indian TV. The score for the drama has been composed by Anoushka Shankar, the British-based sitarist and daughter of Indian legend Pandit Ravi Shankar and Hollywood composer, Alex Heffes, (‘The Last King of Scotland’ and ‘Mandela: Long Walk to Freedom’).

Elsewhere, during the 45-minute online press conference, Khatter recognised that for many, his character, Maan, is a big part of the novel’s appeal.

“He is a miscreant, a rebel without a cause and the non-conformist in his family and he has to be the one who sticks out for the story to go forward.”

Newcomer Tanya Maniktala who plays Lata, said she did not think too much about the pressure of playing – what many perceive – as the titular role.

“I had to remind myself that Mira Nair, a legend, believed in me and if she could do that, so could I. People don’t have expectations of me, so let’s just put my best foot forward and take it as it comes.”

Davies, who has adapted novels, ‘War and Peace’ and ‘Pride and Prejudice’ for the BBC, said he was used to that sort of pressure and had the author on hand, this time, to consult.

He said he focused on the individual characters’ emotions and the story arcs, not so much on the mirror to Indian society, both Seth and Nair are keen to show.

“I wasn’t terribly concerned with making sure I told the story of India accurately, because if that was all we did, nobody would watch it. I wanted to tell the story of these people as movingly as possible.”

Privacy & Cookies: This site uses cookies. By continuing to use this website, you agree to their use.
To find out more, including how to control cookies, see here: Cookie Policy
← UK Asian Film Festival 2018: ‘Aaji’ – revenge drama more subtle than it looks…(honestly)
UK Asian Film Festival (March 14-25) – Glittering launch event will see Simi Garewal, Mahira Khan, Amy Jackson and Meera Syal and others get awards →