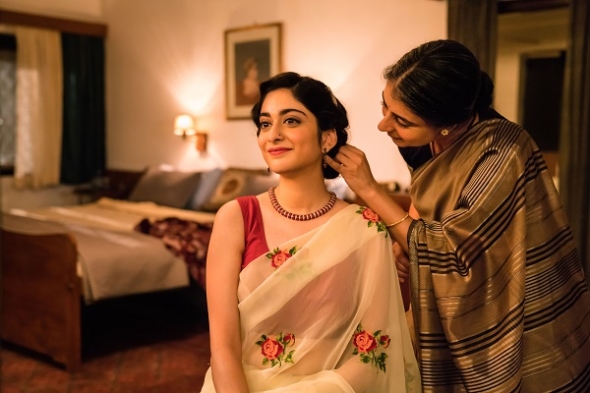 Regarded as a modern classic, making TV from it, will inevitably divide…

When acv talked to Mira Nair about ‘A Suitable Boy’ last year, she quipped that her first BBC Series – a TV adaptation of Vikram Seth’s modern classic novel – ‘A Suitable Boy’ would be like ‘The Crown’ but with brown people.

Having seen the first two episodes, this has more echoes of ‘Downton Abbey’ than ‘The Crown’ – but both dramas are globally popular and there is no reason why this should not join them on any such list.

There is much to admire here, but it is a slightly slow and laboured beginning, and there is not enough tension or drama in the first episode.

Simply, there is too much scene and character setting and it maybe a little underwhelming for a casual viewer – not intrigued enough by the India of 1951 – or the characters.

The second episode, though, is action-packed and really throws you into the India of that time, just before India’s first democratic elections, following the end of the Raj and the intense and tragic trauma of Partition.

You begin to get a better sense of the four families at the heart of the drama – The Mehras, Khans, Kapoors and Chatterjis from episode 2 – it can be a little hard to follow who is related to who – and indeed, who is involved with who…

As you might expect from an Andrew Davies screenplay, parts sizzle – it does get a little steamy and most of the characters are engaged in some sort of ‘dubious’ frolicking – that, again, will be more apparent in episode 2.

From the central character ‘Lata’, played by newcomer, Tanya Maniktala, to her grandfather, a slightly lecherous academic with a much younger companion, there is romance, lust and longing.

The central character, Lata, a Hindu, finds herself falling for her handsome university classmate, Kabir Durrani (Danesh Razvi) – and what inspires the title – her mother (Mahira Kakkar) is desperate to find her daughter, a suitable boy.

And Lata’s first love is no such thing, simply because he happens to be Muslim.

There are numerous sub-plots around this, but perhaps the one that is of most significance early on is the relationship between the young ‘Maan’ from a respected political family (Ishaan Khatter) and the cougar-ish and talented, beautiful Ghazal singer Saeeda Bai (Tabu) – another Hindu-Muslim coupling that is edgy, sexy and quite inappropriate for the time.

Forget the religious divide, Bai is considerably older and has a penchant (and a pecuniary incentive?) for enticing well-to-do men, but she is now involved with the deputy home minister’s wayward young buck of a son, Maan – who professes love and devotion.

There is dialogue in Hindi, Hindustani and Awadhi (a localised version of Hindustani) – and it is all subtitled – but about 80 per cent is in English.

This all gives the drama a rich texture and the music another exquisite layer – Saeeda invokes the great poets of another age and it certainly enhances her romance with the keen Maan.

However, that particular love affair can’t end well, as readers of the novel might already know…on these two episodes there is enough to keep us coming back.

And it maybe that we are expecting too much – and will the complex Indian layers of religion, caste and respectability – and near 100 per cent brown cast be just too much for some. We hope not… (Sailesh Ram)