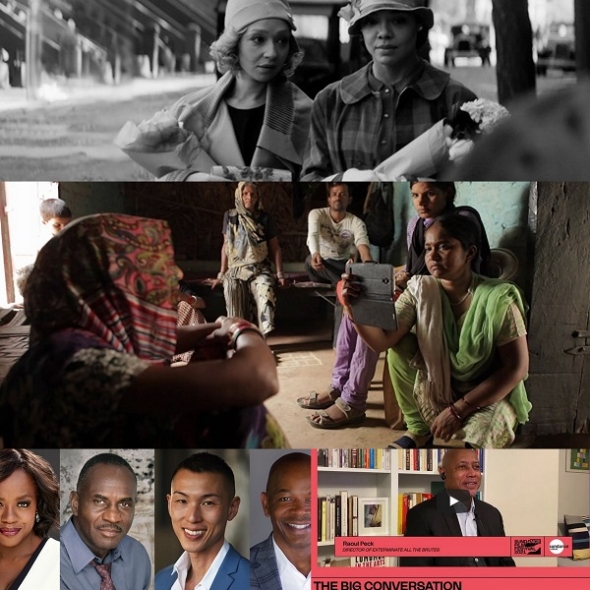 What we have seen so far at this year’s top Indie festival which is online this year with no physical events actually taking place in Park City, Utah…

HEARTWARMING and positive, ‘Writing with Fire’ is a fascinating documentary about India’s only totally woman-run media organisation, Khabar Lahariya.

But this is far from an ordinary set-up, the women are from a community often marginalised and frequently mistreated – known as Dalits.

It is also hugely topical with the debate about press freedom in India currently raging as the farmers’ protests in Delhi continue to reverberate throughout the country.

This film shows at a grassroots level what is happening and it is worth viewing just for that alone. Compiled between 2016-19, it gives an overview of the work Khabar Lahariya does and it is from the bottom up.

There are some 20 reporters who all work in one of India’s most populated and impoverished states – the sprawling near nation state of Uttar Pradesh (population approximately, 300 million).

Debutant feature filmmakers Rintu Thomas and Sushmit Ghosh take their camera right into the heart of the organisation – both at work and at home.

Rape, domestic violence, and development issues all come under their journalistic radar.

If anything, the film plays down the risks these women take – even their own families are suspicious about what they are doing – women working (professionally) is generally frowned upon in many traditional communities and there is general sense of having to face down the patriarchy every day of their lives – that part is hugely inspiring.

These women are fearless and brave and represent the best of India – the film charts the move from print alone to digital and now the organisation is expanding to other regions of India.

Thomas and Ghosh don’t impose their editorial slant – in the post Q &A, in which Meera joined the directors and Sundance programmer Ania Trzebiatowska, they told the audience that everything was collaborative.

Perhaps my only small quibble is that the film’s first meaty section compromising only two minutes was of a meeting of the Khabar Lahariya group and them discussing the move from print to digital. While it was a big deal for the journalists and understandably so – the actual meeting was a few hours long – it wasn’t the most dynamic set up but the film follows a more conventional choronological narrative which has its strengths and its disadvantages – we never see one story from start to finish. It is not a criticism and Ghosh admitted there are many ways to cut the footage they had.

The film actually starts with a rape case investigation – and that rightly says more about the work and the people behind Khabar Lahariya than anything else. (Sailesh Ram) .

DEBUTANT director Rebecca Hall’s film about two women in 1920s America who chose to explore their identity in different ways is both impressive and very stylish.

The black and white photography and the 4:3 TV aspect give the film an otherly world feel and do help transport you to a very different age and era.

Made with the help of Film 4 (Channel 4’s feature film production arm) it is a complex and subtle exploration of race and identity and is a screen adaptation of Nella Larsen’s 1929 novel of the same name. The title is from the idea of passing as white.

Indeed the drama centres Irene Redfield (Tessa Thompson) and Clare Kennedy (Ruth Negga) who chose very different routes to what they see as the good life.

Irene – played with a beguiling presence by Thompson (expect award nominations) and Negga (just as impressive, if a shade less presupposing as a character) represent two sides of black American well-to-do-life. Clare is married to a white man who makes it clear he doesn’t like black folks. Umm – you know there can only be trouble ahead.

Irene is something of a brilliant hostess and party organiser and is close to a well-known white society novelist. Married to a black doctor (André Holland) with two young sons, she never denies her black identity – except at the start of the movie when she and Claire run into each other after many years. They had been to school together in Harlem but Claire preferred to live another life after leaving – one that denied her black identity and helped to pass herself off as white.

Beautifully acted, and elegantly composed, this probably does to huge justice to what was described in the post Q&A as a “masterpiece” of a novel and indeed, Hall in the screening post Q&A, suggested it was a homage to Larsen and her craft.

It is a delicate and intricate story, subtle and gentle in its dissembling and there are many themes running through it that are still with us today.

Some may find it a shade laboured and the beginning does seem ponderous and a little uncertain of itself – perhaps like the two main characters who don’t know quite what to make of each other when they first encounter the other after so many years.

It is a gorgeous production and it is hard to take your eyes off Thompson – and the way Hall handles everything suggests we are in the hands of a major artistic cinematic talent.

Hall also told the Q&A audience she was drawn to the novel by the fact that her maternal grandfather is most likely to have been ‘white passing’.

ON FRIDAY (June 29), Tabitha Jackson, Sundance Festival director, in one of the festival’s ‘Big Conversations’ spoke to Raoul Peck, who was behind the hugely successful ‘I am Not Your Negro’ (2016) and is now making, ‘Exterminate the Brutes’.

This is a hugely ambitious documentary project, again inspired by American writer, James Baldwin (the title of 2016 film is a quote from Baldwin who died in 1987, aged 63.

Surveying some 600 years of European and American history, Peck will also use narrative drama, photographs and archival footage to show how violence, settler philosophy (in the US specifically), slavery, colonialism and constructed racial identities have impacted the modern world and how we might tackle them to produce a better world for all. You can watch their discussion above…

Commissioned by US network early last year, Showtime, the one-hour long episodes are going into production shortly and will film in Atlanta, it was revealed during the talk.

Davis said she was hugely excited by the role but played down any idea that she would be seeking the former First Lady’s direct input, saying it would be just an intrepretation.

The drama is about what goes on the East Wing of The White House and will also dramatically cover the lives of two other First Ladies, Eleanor Roosevelt and Betty Ford. It was revealed last week that Michelle Pfeiffer will play Betty Ford and that director Susanne Brier ( ‘The Night Manager’ 2016) will direct.

Organised by Sundance sponsor, Dell Technologies, the discussion took place on Friday (January 29), and the talk was moderated by Claudia Eller, top industry title, Variety editor. She pushed the executives to reveal more about casting for ‘First Lady’ but Andrew Wang from the TV division declined to say anything more than the company were talking to potential stars.

The discussion also heard from Julius Tennon, Viola’s husband, and JuVee president/producer, and Rob Williams who heads up the Film division of the company. It has number of TV and film projects in the works and the three discussed how the company looks to bring marginalised and unrepresented voices onto global platforms and was founded by Davis, to help nurture the careers of other talent, from whatever field, in the production of content.

JuVee also signed a deal with an expanded first look deal with Amazon Studios in the middle last of last year, deepening their relationship in terms of TV output.

*It was revealed on Friday that Bollywood star Hrithik Roshan is set to play the character of Jonathan Pine in an Indian version of ‘The Night Manager’. In the BBC drama, Tom Hiddlestone played that role. It is a screen adaptation of a novel by John Le Carré. The great British novelist died in December last year. The report said it is likely the series will feature on streaming giant, Disney Hotstar.

Privacy & Cookies: This site uses cookies. By continuing to use this website, you agree to their use.
To find out more, including how to control cookies, see here: Cookie Policy
← Bollywood asianculturevulture vibes – Big battle at the box office…
‘Bridgerton’ Series 2: The new Indian twist – Simone Ashley and Charithra Chandran, British Tamilian superstars, as two sisters who get tongues wagging… →