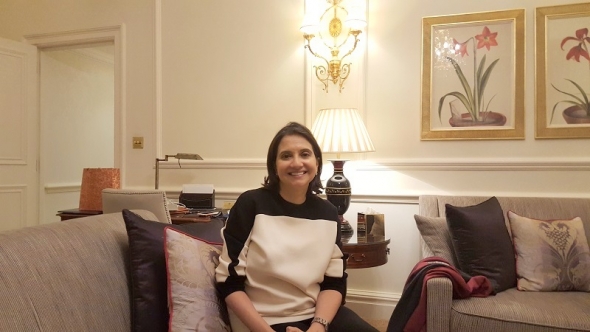 ONE OF INDIA’s foremost film critics has called for a re-evaluation of Bollywood in the West.

Anupama Chopra is one of India’s best known film critics and has her own Youtube channel and website (links below), broadcasting and publishing reviews and stories about Indian cinema. She also helps to programme the Mumbai Film Festival (October 12-18 2017).

She argued mainstream cinema output from India deserves to be treated as a serious art form in its own right.

She also called upon the Indian government to better support the industry and more keenly appreciate its soft power.

She was highly critical of the silence of Indian politicians after famed director Sanjay Leela Bhansali (SLB) was physically attacked on the set of his latest film, ‘Padmavati’, in Jaipur, in late January.

Speaking in person to www.asianculturevulture.com last month while on a short promotional trip for her daughter Zuni’s first novel (story coming), ‘The House That Speaks’, Chopra said: “Bollywood needs more attention, it still gets dismissed as kitsch and doesn’t get seen as an art form which is unique and different from the way the West tells their stories.

“It doesn’t make it of any less value, it’s just different way of a telling a story,” she argued.

“Most people still in the west just see it as colourful and kitschy and I’m hoping that will change, it’s a form that speaks to billions of Indians – it also speaks to people in Africa, Indonesia, and Malaysia.”

She said she was encouraged by initiatives such as the BFI’s India on Film season, to break down barriers and let people see for themselves the traditional attractions of Indian cinema.

“I have seen Bollywood grow in stature and it’s been wonderful,” she declared.

She felt those in power in India did not understand the industry and filmmakers were cautious in speaking out.

“The government doesn’t treat the film industry with enough seriousness and respect. You have crippling taxation, you have a situation where the biggest names in the business are put in situations that are completely surreal.

“It is terrible that man can come onto a film set and slap a director the stature of Sanjay Leela Bhansali and there is no major political leader who comes out to say that this is wrong.”

She said that if the government understood the industry better and appreciated the soft power it wielded, it would have come to Bhansali’s defence.

Anupama Chopra in London, with her daughter Zuni, the author of 'The House That Spoke'

“SLB is one of the great artists of the country and so what we need is not just for the government to understand the soft power of the industry but to give it enough respect and protection, so that artists can function in safety.”

She felt the climate for filmmaking had changed as the government appears to support a more interventionist licensing board (though formally independent of government). Most recently, it refused a certification for the indie film, ‘Lipstick Under My Burkha’.

“Film people are soft targets. It’s very easy for people to say, where are the Meryl Streeps (the iconic American actress who railed again President Donald Trump) you can’t talk about it because someone is going to pick up a stone and say your film is not going to release, then what do you do?”

She said if the powers that be understood filmmaking and the soft power it had especially outside India, it would act differently.

“It’s not enabling the film industry. Bollywood is one of the biggest Indian brands there is, along with yoga and cricket, and cricket doesn’t count in America.

“Everywhere I go and I travel extensively, when people think of India, they think of Bollywood. I really hope and wish that people recognise the strength there is in that.

“And the fact that it is the lone kind of film industry in the world that hasn’t buckled under the pressure of Hollywood, so let’s protect these artists, let’s enable the infrastructure, let’s build more theatres,” she urged.

Privacy & Cookies: This site uses cookies. By continuing to use this website, you agree to their use.
To find out more, including how to control cookies, see here: Cookie Policy
← Asian and black journalists call in ‘Time for Change’ for UK media…our support
Gathering support for open letter calling for real change on diversity in the film and TV industry – and organised by Asian women creatives… →