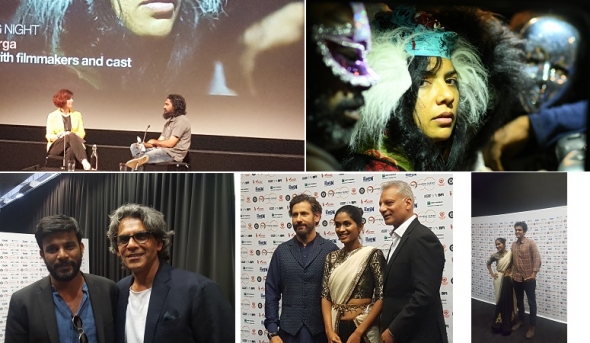 IT’S A ROAD movie without a destination and a distinct ending but in many ways, Sanal Kumar Sasidharan’s ‘Sexy Durga’ which closed the London Indian Film Festival (LIFF) last night, is probably a film without parallel.

A Hivos Tiger Award winner (top prize €40,000) at the International Film Festival of Rotterdam this February, the film is a deeply meditative exploration of violence and its roots – though that might not have been immediately apparent from just watching it last night.

• an outstanding achievement award to actor Anjali Patil (who featured in ‘Newton’)
• and a short film award to Siddharth Chauhan for his first ever creation, ‘Papa’
• and an audience award for ‘A Billion Colour Story’ by Padmakumar Narasimhamurthy…
… Sasidharan’s still film left a real impression.

Shot without a script and using non-professional actors largely (but not Durga played by Rajshri Desphande) and some ingenious shooting methods (strapping a cameraman to the roof of the tempo van in question), the film possesses real tension and an understated level of aggression – that always seems on the verge of exploding (and does…?).

For those reasons it’s a tremendous ride – fresh, urgent, relevant and uncomfortable.

But it isn’t for everyone and perhaps not all of it works as it might, but that is not to deny Sasidharan’s bravura and panache.

In the post screening Q&A with Observer critic Wendy Ide, he revealed that he had shot the film in 29 nights (it is literally dark) and that most of those in the film were his friends.

“They kept asking what is the story? I told them there is no story,” revealed Sasidharan.

His skill as a filmmaker is to hold it all together and yet there is a narrative of sorts and one we can all recognise – because many of us have found ourselves in places quite literally, we don’t know how to get out of – or where we are going exactly.

It’s hard to describe the plot (so much as it is) without revealing what the film is essentially about – so we won’t.

Suffice to say a bunch of local guys pick up a hitchhiking couple in Kerala in the early hours of the morning – the woman is Durga and a Hindi speaker, and her companion/boyfriend/husband/lover/mate – Kabeer (Bilas Nair) is Malayali and speaks the language.

He says Durga is his wife, but that is not something he proffers at the start of the encounter with the guys in the mini-van, so you can draw your own conclusion.

There are several very powerful images/scenes from ‘Sexy Durga’ – a few of the most telling are at the start and the images of an important religious festival where young men are devotionally piercing themselves, and hanging from metal wires drawn through their skin and walking on hot coals.

Another is one where the film goes ‘punk’ (not in a musical sense) and a little bit horror flick – the music is heavy metal and suddenly we are in something like ‘Scream’ or ‘Donnie Darko’.

The juxtaposition of these two different visual experiences chronicling the fate of Kabeer and Durga was better revealed in the Q&A.

Sasidharan said: “I was thinking about where does this violence come from.”

Ide encouraged him to talk about patriarchy and Sasidharan said there was no doubt it that it was utterly pervasive – and that the Delhi gang rape of 2012 had set a train of thought which had led him all the way to ‘Sexy Durga’.

He told the audience that the authorities in India had already prevented the film from being shown at the popular and influential Mumbai Film Festival (October).

“They had a problem with the title,” he said.

At one level, you can understand Sasidharan’s reluctance – it is that for a very good reason – but on the other if it prevents people from watching it?

“I can’t change its name – can I change my name?” he joked to make his point.

In some ways, it was a challenging film to finish LIFF with, but that is the festival’s stated purpose to bring films you might not normally see to a screen near you and in that spirit, you must watch.

The festival opened with ‘The Black Prince’, the epic tale of the lost and last King of the Sikhs, more formally, Maharajah Duleep Singh, last Thursday; along the way we got to hear Bollywood auteur Ashutosh Gowariker recount his career, both behind and in front of the camera; Adoor Gopalakrishnan, another auteur and from Kerala as well, brought his latest creation ‘Pinneyum’ (‘Once Again’) to the fest and perhaps the two standout films of this year’s fest for www.asianculturevulture.com, ‘Newton’ and ‘Hotel Salvation’ – and ‘Sexy Durga‘ for its radical sensibilities – were all a sure sign that Indian filmmaking is prompting a new and still developing audience – both from the diaspora and outside – to look far beyond the totemic grip of Bollywood.

For other coverage, see festivals tab or put LIFF into search.

Thanks @LoveLiff – see you all next year and many of you at the London Film Festival (October 4-15) – for another fest on the bird’s doorstep 😉 . (Sailesh Ram).

Privacy & Cookies: This site uses cookies. By continuing to use this website, you agree to their use.
To find out more, including how to control cookies, see here: Cookie Policy
← IFFI 50: Final day closing ceremony and film (November 28) – Stars talk films, fans and what they have learnt…Vijay Devarakondara, Rakul Preet Singh, Ilaiyaraaja, Farah Khan…(yesterday)
IFFI50 hears from big names as festival moves to its final day tomorrow (November 28) →