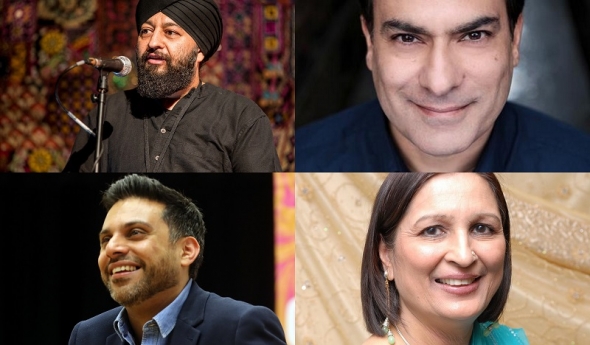 Just a few days ago, more than a 1,000 people were named in the most honours list – we speak to those from the arts world recognised and hear that art can inspire all and help heal divisions…

TWO PROMINENT festival directors, a leading actor-writer-producer and culture organisation head have all told www.asianculturevulture.com of their delight and surprise at being named in the recent Queen’s Birthday Honours List.

Sandeep Virdee, founder and director of Darbar, which organises the annual Darbar Festival of Indian classical music, was named as a recipient of an OBE, when the Queen’s Birthday Honours List was released on Saturday (June 17).

Dr Pushpinder Chowdhry, founder and director of the almost 20-year-old London Asian Film Festival (formerly known as Tongues on Fire) was given an MBE in the same list.

Virdee founded Darbar in 2006 and created it as a tribute to his late father – Bhai Gurmit Singh Ji Virdee (1937-2005) who was a tabla teacher – and was very passionate about Indian classical music.

Sandeep told www.asianculturevulture.com: “He taught tabla for 30 years in the UK – he was the catalyst. It represents his values, bringing people closer together through music.

“It was a big surprise getting the OBE. It is something I thought people got when they were getting on and in their 70s.”

Virdee is 50 and has been able to expand Darbar into what is today widely recognised as one of the largest celebrations of Indian classical music in Europe.

Catch Darbar musicians at the Ravenna Festival in Italy – click

The 16th edition (September 16-17) this year expands again – introducing dance to the customary classical music performances – with the world-renowned choreographer and dancer Akram Khan curating three nights at Sadler’s Wells in November under the Darbar banner.

Darbar is also going to Italy for the month-long Ravenna Festival, and Indian classical musicians are playing at the festival between June 22-24 and Darbar expands across venues when it is in the Southbank in September.

Virdee thought the OBE was recognition not only for the festival itself, but for its wider contribution in nurturing new and young classical musical talent from Britain and giving them a platform through Darbar.

Similarly, Dr Pushpinder Chowdhry, founder and director of the London Asian Film Festival (LAFF), started the film festival from a personal passion and wanting to encourage more women to be part of the filmmaking process.

The festival was originally called Tongues on Fire – but changed its name to make it clear it was a film festival. It celebrates 20 years next year.

“I never expected this,” Dr Chowdhry, a psychotherapist, told acv. “I wanted to bring different types of films here and we had an ethos of wanting to bring people together.

“Many dedicated people helped to make it happen over many years and it wouldn’t have been possible without them.”

She said it was slightly uncanny in that it has been almost 20 years exactly, since her father, Sewa Singh Kohli received an MBE, also for services to the Asian community. He died in 2012.

He founded Glasgow Art Centre on his retirement and it displayed artworks created by the Asian artists and the community. A businessman, who brought one of the first Asian supermarkets to the city, he nevertheless revelled in artistic creation.

“It was his passion and he promoted Indian art and music,” Dr Chowdhry explained.

The festival clocks up 20 years next March and Dr Chowdhry and her team are working on putting a very special programme together marking the anniversary.

Varma who broke through in a leading role in the BBC soap, ‘Eastenders’ in the 1990s, has gone on to establish himself as a prolific writer and producer.

In an email, he told www.asianculturevulture.com: “I am honoured, humbled and feel very privileged to have been bestowed this honour amongst some amazing names.

“I feel so blessed and lucky to have had the options that I have had and would like to thank my family for their support and all those who listened to my voice and allowed my story to be told through my work and projects.”

He is adapting his own very successful Bollywood stage play ‘Wuthering Heights’ (with some help from Emily Bronte and Tamasha in 2009), for the big screen through his film outfit, Pukkanasha and already has a number of short and long features to his credit – including a film about a Charlie Chaplin society in India – called ‘Mumbai Charlie’.

He remains very committed and just like all the recipients believes art has a special role in communty relations and can help to heal and inspire.

Deepak Varma is adapting his play for the big screen – click

He added: “Stories make the world a brighter place and connect humankind. Stories told on TV, film, through song, and theatre show us how we are all one. We may seem different on the surface but stories show us that we are not separate. We are all traversing this planet with our unique viewpoint.

“Recent events in the world show us that there is a need for stories more than ever – to connect us, strengthen us and to unite us, so we can better understand each others journeys on this beautiful planet which we are so blessed to tread. Stories show us that we are not alone. Stories make us feel safe. They inspire us and take us to worlds we may never see nor experience.”

Vikas Kumar has been involved in the arts for more than 25 years and set up GemArts 17 years ago, when he was involved in the voluntary sector from a business and finance background.

On being awarded the MBE, he told www.asianculturevulture.com: “I am extremely honoured and humbled to receive this recognition, it is totally unexpected.”

Vikas Kumar of GemArts, which is behind the award-winning Masala Festival

Gem Arts is one of a small number of organisations that receives funding from the Arts Council England as a national portfolio organisation.

While it may have been created in the North East, it operates nationally and internationally, supporting artists from a South Asian background, across a range of disciplines and practices.

“We aim to celebrate and recognise cultural diversity, and we bring people together and enable people to express their complex identities,” Kumar told acv over the phone.

Artist Idris Khan was also awarded an MBE. He was not available for comment, as was Tejinder Kumar Sharma, given an MBE for Hindi literature and community cohesion.