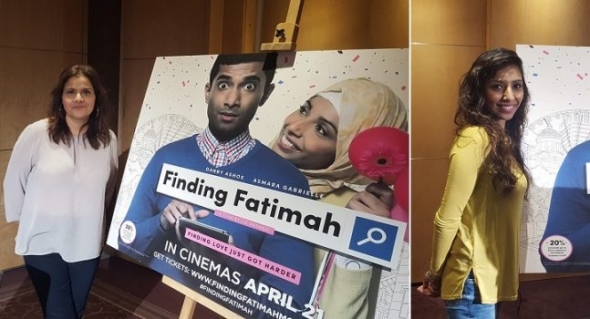 THEY may be leagues apart in terms of their acting experience and respective profiles – but one thing binds well-known face Nina Wadia and newcomer Asmara Gabrielle together.

They get more opportunities in the US than at home in the UK as actors and find it both disappointing and dispiriting.

In what amounts to a wake-up call (neither the first, nor the last, it would seem) – both want to see change and it cannot come sooner.

Wadia told www.asianculturevulture.com: “In the US, they go for quality, they don’t look at the colour of your skin or the background.

“You can be a brown person playing Katrina but whereas you can’t here really, as yet – you’re still playing Sunita.

“I am waiting for that to change.”

The ‘Eastenders’ and ‘Goodness Gracious Me’ star has just completed another pilot in the US called ‘Champions’.

Featuring US star Mindy Kaling, it’s about a couple of gormless but good-looking Caucasian guys, who find out one has a son from a high school fling with a girl called Priya. She deposits the now teenage boy on their doorstep and tells them to get on with it.

“I finally play a Persian, a nail salon owner,” revealed Wadia who is a Parsi. Parsis or Zoroastrians, as they are also known, left ancient Persia and mostly resettled in western India between the eighth and tenth centuries of the Common Era.

“It’s very exciting, last year I did a pilot for Vijal Patel (writer, ‘Black-ish’, a US show which enjoyed high ratings and critical praise) called ‘Square Roots’ about a family of chemists.”

Nina Wadia plays Khadija, aka 'The Brown Widow' on her dating app

While that didn’t get picked up, it was clear there is a great hunger and appetite for new and different voices in the US.

“I feel there is a glass ceiling when it comes to Asian characters in this country and I am sad about that.

“I will give you an example, in the US, if you have a small part in a sitcom that does very well, you will get your own sitcom one day.

“In this country, I’ve done small parts in many shows and never got anywhere, so I am kind of tired of people saying you’re great and we love your work and then not giving me a serious role.

“I’ve got to the point where I’ve worked really hard, I’ve proved myself and I don’t want to have to prove myself any more.

“I’ve got a showreel and an agent in the US, and I could be a showrunner (someone who looks after a whole series), but there is no opportunity to do that here.”

In ‘Finding Fatimah’, Wadia plays Khadija who is on a dating app herself under the alias, ‘The Brown Widow’.

“It’s an emotional rollercoaster and that’s what I like about the film.

“She wants her son to meet someone, but at the same time she wants to meet someone herself and that is unusual and what I like about her. She is a strong woman while going through a lot of emotional things herself.”

Wadia also appears alongside a strong UK cast (Michelle Keegan) in a forthcoming film, ‘Strangeways Here We Come’ – with her husband Raimond producing this time and doing the music as he did for the first film from their production outfit, ‘Four’ in 2011.

She maintained an acting CV (in short films), while working in the media and more latterly running her own cake-making business.

‘Finding Fatimah’ is her first debut feature as a lead actor.

“I get lot more audition inquiries from the US. Obviously, it’s a bigger industry but they are more open to ethnicity,” she told www.asianculturevulture.com.

Both lament that there are not more films like the one they have just done together.

It’s in part what persuaded Wadia to sign for the film with newcomer writer-director Oz Arshad.

He simply emailed Wadia’s agent, saying he had written a film and had created a part with her in mind. She plays the mum of the central, lovelorn Shahid (Danny Ashok).

“I liked it, it had a real warmth to it, it’s a very sweet movie.

“I am a big supporter of new talent. It’s payback. I got a leg-up when I was younger, but I still feel if I can nurture and encourage new British Asian talent, then the British Asian film industry will be bigger and that would create work for all of us.”

A GP, she has anger management issues and has been on the dating scene for a bit without any luck.

“She’s got a lot of personality traits that are similar to mine, she’s strong, independent, liberal and has good human values. The one big difference is she’s an adult, and I am like a five year old, mucking about,” revealed Gabrielle, a comedy writer as well.

For Gabrielle, who is from a Muslim background, there was another powerful pull to do a film like ‘Finding Fatimah’.

‘One of the main reasons why I am so excited about this film is because most people’s exposure to Islam is via the media, and it’s through negative headlines and these then produce misconceptions and prejudice and that’s just ignorance due to a lack of understanding and education, so it’s crucial we get films like this out there and turn that perception around,” said Gabrielle, who also is ascriptwriter with the BBC Writers Room. She recently appeared on a BBC writers new talent 2017 list.

*‘Finding Fatimah’ is on release in the UK from Friday, April 21

Privacy & Cookies: This site uses cookies. By continuing to use this website, you agree to their use.
To find out more, including how to control cookies, see here: Cookie Policy
← ‘What will people say’ – A lament for humanity (London Indian Film Festival review)
‘Doob – No Bed of roses’ Bangladesh’s Mostofa Sarwar Farooki says Irrfan Khan starrer is about national icon and scandal… →