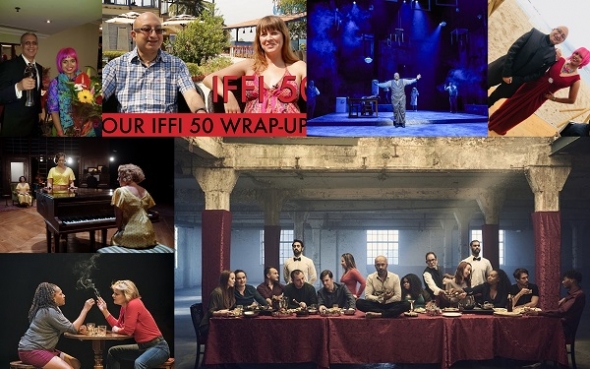 It’s been an incredible year for www.asianculturevulture.com and here three writers look back on their highlights of 2019…

Music: Nitin Sawhney
ANOTHER impressive year for composer/musician extraordinaire Nitin Sawhney whose 2019 kicked off on a high after he was awarded a CBE for his services to music in the New Year’s Honour’s List. ACV was also there to see the music maestro pick up the Outstanding Achievement in Music Awards at The Asian Awards back in April at The Grosvenor House Hotel.

Away from the music scene Sawhney’s Twitter feed has been the place where he continues to voice his personal and political opinions, but this year he didn’t just leave them as social posts, back in February he performed a free public concert at The Barbican Centre where he unveiled his own anti-Brexit theme entitled ‘Brexit: A Rational Anthem for a National Tantrum’ performed with Andy Serkis dressed as Theresa May as part of their Barbican Open Fest exploring what it means to be British today – it was a sight and sound to be behold.
Sawhney is a man who never stops impressing, but 2019 will be remembered most by his fans and possibly him too as the year his landmark album ‘Beyond Skin’ turned 20, an occasion marked at the Royal Albert Hall where for the first time he performed it in its entirety along with special guests who appear on the record. It was an emotional evening performed with passion; a real highlight of the musical year.
http://asianculturevulture.com/portfolios/beyond-skin-nitin-sawhneys-20th-anniversary-concert-at-the-royal-albert-hall-review-brilliant-journey-of-nostalgia-and-hope/

CHANNEL 4 has a long history of commissioning dance themed content but this original documentary fronted by Akram Khan was unlike anything they’ve screened before. A cross between a biopic and a ‘contemporary dance’ it opened with Khan describing his relationship with the Brick Lane area of East London, where he spent his youth working as a waiter in his father’s restaurant and his spare time learning his art. Thoughtfully told with insights and anecdotes it was an example of just how creative storytelling on the small screen can be.
See my ACV review. http://asianculturevulture.com/portfolios/the-curry-house-kid-akram-khan-combines-journalism-and-dance-in-channel-4-documentary-with-a-difference-review/

FASHION: Cannes 2019
IT’S NOT EVERYDAY, you get to be the first media to clap eyes on what the Bollywood stars are wearing on the red carpet of the biggest film festival in the world, but that’s exactly the position we found ourselves in when we were the first to break the matching mermaid dresses worn by Aishwarya Rai-Bachchan and her daughter Aaradhya, ‘That Green Dress’ modelled by Deepika Padokone and even a princess gown worn by Kangana Ranaut, all of which we shared on our socials…. (also on our Instagram).

It was only a little later we got to find that our content had been re-used without credit by one of the biggest film magazines in India (here’s the updated story http://asianculturevulture.com/portfolios/aishwarya-rai-cannes-video-controversy/ ). They did credit one of our videos in the end – after our story.

Still, that didn’t put too much of a dampener on the festival, the rainfall managed to do that – yet despite getting wet, team ACV still managed to get to a party on the beach, attend red carpets (https://youtu.be/ZvFCBPd), watch movies and track down the city’s fashionistas in our street style video (https://youtu.be/wSCXgoTxHYo). All in all it was a glamorous week. Check out our round-up of the fashion festival of Cannes 2019. http://asianculturevulture.com/portfolios/cannes-fashion-2019-trends-and-triumphs/

It’s always difficult when the editor makes you choose but here goes…
LONDON has been pretty awesome this year and three plays in particular sum up the state of 20th century America quite succinctly: ‘The American Clock’ (http://asianculturevulture.com/portfolios/the-american-clock-review-awesome-production-steals-hearts-and-minds/) at the Old Vic with Clarke Peters about capitalism; ‘Sweat’ (http://asianculturevulture.com/portfolios/sweat-us-rust-belt-goes-under-spotlight-and-diversity-and-immigration-also-get-dramatic-treatment-review/) by Lynn Nottage at the Donmar and then Gielgud theatres – on the effect of globalisation on industry and ‘Death of a Salesman’ (with the incredible Wendell Pierce and Sharon D Clarke as ‘Willy’ and ‘Linda Loman’, respectively,) transposed into a black American family at Piccadilly theatre and running until January 4 2020.

I have also enjoyed ‘Tartuffe’ (http://asianculturevulture.com/portfolios/tartuffe-rsc-production-has-laughs-and-serious-point-to-make-review/) at RSC, ‘Mushy the Musical’ by Rifco and ‘Stardust’ by Phizzical at Belgrade Theatre Coventry, not to mention, Gurpreet Kaur Bhatti’s, ‘A Kind of People’ at the Royal Court (and on until January 18) and ‘Three Sisters’ at the National Theatre, directed by Nadia Fall and transposed to Nigeria by playwright Inua Ellams.
I could go on….but on a different note, ‘Homelands: Art from Bangladesh, India and Pakistan’ currently on in Cambridge is worth a visit and admission is free – exhibition is on until February 2 2020.
(https://www.kettlesyard.co.uk/events/homelands-art-from-bangladesh-india-and-pakistan/) There was also the marking of the 40th anniversary celebrations for Southall Black Sisters through the films programmed at this year’s UK Asian Film Festival focussing on the themes of struggle, change, dissent and resistance at Rich Mix. So pertinent!

FILM
BAAHUBALI: THE BEGINNING, LIVE at the Royal Albert Hall in London was simply magical – the atmosphere, the music, the stars in attendance…
Did you know we got to interview Prabhas, Anushka Shetty and Rana Daggabuti before they went on stage for the Q&A and the live performance?

Six international film festivals in a year, yes, really…
It started with Sundance in Park City, Utah, where Bird No1 (aka SR) went in search of the world premiere of Gurinder Chadha’s ‘Blinded by the Light’. We were not disappointed. Everyone was terrific!

Then there was Cannes – which my colleague Momtaz has highlighted – it was our fifth covering with video (!), our sixth for www.asianculturevulture.com and personally, my 11th consecutively – of all the videos, the Diana Penty from this year in the rain was memorable (even if it wasn’t me posing the questions…)

Toronto International Film Festival (TIFF) – we did a slew of interviews on the red carpets to many world premieres and interviewing Adam Sandler and Natalie Portman was a huge thrill and with Priyanka Chopra Jonas we were so near, and yet so far… We did speak to Farhan Akhtar about the film at TIFF.

On home soil with London Film Festival (LFF), and the highlight was catching up with director Shonali Bose (‘The Sky is Pink’) and seeing the latest Scorsese film ‘The Irishman’ which closed LFF.

Then we went off to Goa for the 50th edition of the International Film Festival of India (IFFI) – special it was too – seeing Amitabh Bachchan and Rajinikanth get their respective awards at a glittering opening ceremony – and being in Goa was a great experience – even it was a little too hot on occasions. Our wrap video below gives you our impressions.

And our last festival of the year and over to Macao for our second International Film Festival and Awards Macao (IFFAM)… hearing and interviewing one of the newly emerging stars of Bollywood, Bhumi Pednekar, was thrilling and a chance to catch up with her…

Finally, interviewing the Turner Art Prize winner 2017 Lubaina Himid was personally a massive highlight. Being invited to the Newlyn Art Gallery in Penzance, Cornwall to see the exhibition (‘Invisible Narratives‘) Himid had curated – and then talk to her about her own work displayed – and others was a fabulous experience all around. Cornwall is beautiful. We would love to cover more art in this way, so let’s see how this ambition unfurls in 2020…

Have a fab New Year and an incredible decade ahead… !!!