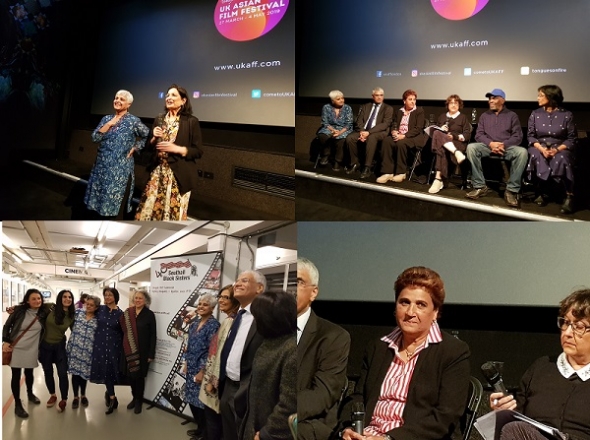 🎥 Panel brought together for a post-screening discussion of the film, ‘Provoked’ (2006), which is all about the Ahluwalia case and is part of the ongoing UK Asian Film Festival in London (May 27-April 7)

🎥 Kiranjit Ahluwalia on the panel herself and told audience about both her despair and hope at the time of incarceration and subsequent release, thanks to SBS

🎥 SBS is celebrating 40 years and next Saturday (April 6), there are screenings and a talk at Rich Mix again – marking the legacy of change and resistance in a talk entitled, Subversion and Dissent, and which will see ‘My Beautiful Laundrette’ (1985) and ‘Brick Lane’ screened and feature a post-panel discussion including ‘Brick Lane’ novelist Monica Ali.

IT REMAINS one of the defining chapters in the case for gender equality in Britain and was made possible by a group of Asian and Black women who were passionate about justice and equality.

That much was clear at Rich Mix arts centre in London on Saturday (March 30) when a specially convened panel came to discuss both the film – ‘Provoked’ – inspired by Kiranjit Ahluwalia, and her case itself.

In 1989, her husband died from burns following a fire in their home. It was established that Ahluwalia had started the fire and after an unsatisfactory trial for murder the 32 year old at that time was incarcerated and sentenced to life imprisonment.

Her original conviction for murder was quashed, and reduced to manslaughter and she was freed in 1992, having already spent time inside.

The crucial change that made all the difference was that the court had been largely unaware (and had ignored) the campaign of abuse Ahluwalia had suffered at the hands of her husband.

The mother of two had been subjected to intimidation, abuse, rape and unrelenting violence, on an almost daily basis.

A psychiatrist’s assessment after her arrest had concluded she was clinically depressed and wasn’t mentally adroit at the time.

This report was never revealed to the jury at the trial and the omission formed a part of the basis of Ahluwalia’s successful appeal. The judge at the original trial had been lax and had misdirected the jury.

As the post-screenings discussion broadened out to look at the current political situation, Pragna Patel, the founder of SBS, said it was important people held onto the ideas and principles behind a welfare state.

She told the audience that SBS had been founded in a response to racism and bigotry of the late 1970s.

“It was 1979 and the NF (National Front, a far-right political party) marched through Southall (a west-London suburb with a high concentration of Asians).

“There was an older generation that believed in turning the other cheek, but a new generation wasn’t going to put up with it,” Patel explained.

It was a time of great social strife and while Margaret Thatcher was in power, and pushing a right-wing agenda, she never felt personally threatened.

“But today the welfare state is under attack and I am more scared now than I was when Margaret Thatcher was in power.”

She said it was important to resist and keep waging the good fight on behalf of those powerless and vulnerable, such as refugees, migrants and the poor.

Rohit Sanghvi, one of the lawyers behind the Ahluwalia case and on the panel too, pointed out that the law itself at the time did not change, but attitudes did. There was an acceptance that domestic violence was a provoking factor in marital strife.

The case was headline news at the time and inspired a generation of activists and campaigners.

Among them was Yasmin Alibhai-Brown, well-known journalist and Independent columnist, who chaired the discussion and said she had been on SBS marches and was inspired by the group.

She said she was disappointed by the increasing tribalisation of voices of dissent and struggle.

“Islamophobia is racism. Have we learnt nothing from the British and colonialism?” (which often divided and ruled and benefitted from ethnic and religious divisions).”

She felt too many people were identifying themselves as one group and cutting themselves off from other groups who faced similar challenges and difficulties.

She was delighted the organisation had retained the word black in it and said: “I am black”, to emphasise her point.

For Ahluwalia herself, looking emotional at times, she said that without SBS, she might never have got her life back.

In prison she felt a sense of liberation and in time, forged important friendships and saw her struggle with that of other women looking for justice.

Today she is a grandmother, with one son living in Canada, and another in the UK and has held a job with the Royal Mail for 21 years. She also said she had reconciled with her husband’s family.

Ahluwalia said she was flattered when she first learnt Rai was to play her in the film but was less sure of the star’s acting ability.

Gupta who wrote the screenplay, said she found it challenging to condense her book to a two-hour film.

“It’s not like writing a book, it’s quite specialised,” she confessed. “And I had never written a film script before.”

She attended a screen writing course and handed the finished script to director Jags Mundra who in turn handed it to his usual American scriptwriter collaborator.

“The nuances of race and class were lost from my script,” Gupta sighed.

Just before the discussion, one of the earliest films about the Black British experience, ‘Burning an Illusion’ (1981) was screened.

Made by the veteran black filmmaker Menelik Shabazz, the film covers the journey of a smart young black woman who suffers at the hands of a violent black boyfriend, but later accepts him and becomes politically conscious.

Shabazz said that he focuses on the self a lot more than he did – arguing that change has to come from within.

“It is about a basic humanity and meeting people on that level before religion or culture,” he posed.

Review of ‘Provoked’ and ‘Burning an Illusion’

YOU CAN SEE WHY Southall Black Sisters put these films together before the panel discussion, Struggle not Submission.
They are both women-centred and politically driven. That isn’t to say there is an artful purpose at work here in either.
Both have strong and easily accessible narratives and are not just polemics (as they might appear to those who have not seen, but are aware of the subject matter). There is high dramatic tension and you can sympathise greatly with the main female characters.
They are exceptional records of their time and must be preserved as works that illustrate black and Asian lives at a time when many communities were under attack simply for being non-white.
Shabazz’s criticism of the way (young) black men are often casually and cruelly criminalised and discriminated against, still holds power (for example in present UK narratives around knife crime), and a powerful line can be drawn from him to US filmmakers, whose work breathes new dimensions to the struggle for equality – from Jordan Peele (‘Get Out’) to Barry Jenkins (‘Moonlight’) and even a new filmmaker such as Boots Riley (‘Sorry to bother you’).

The UK Asian Film Festival continues until Sunday April 7 and nationally until May 4 (check listing details in Leicester, Manchester and Glasgow) here: http://www.tonguesonfire.com