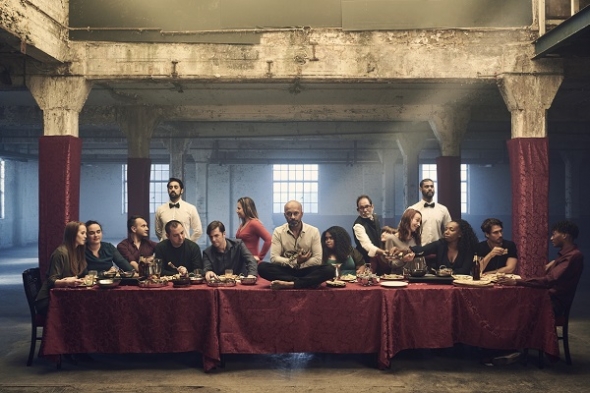 ‘TO THE OUTSIDE WORLD’ you never show that you’re vulnerable or that you have any vulnerability or pain. You just don’t talk about it.’

Akram Khan is in conversation at Channel 4 following the press screening of his forthcoming documentary ‘The Curry House Kid’, which will be broadcast this Monday evening, (see listing for details below).

He’s talking specifically about his observations of growing up on Brick Lane, East London at a time when racism was rife and the 67 restaurants that made up the concentration of ‘Indian’ eateries in the area were all victims of racial abuse, even if the proprietors didn’t admit it.

Home to the biggest Bangladeshi population in the UK at the time, Brick Lane was the capital’s curry hub. Though the programme begins with Khan performing some of the contemporary dance moves he’s famed for, it transitions into him taking on the role of a presenter, making a documentary about the curry industry. But it’s more than a potted history.

While he initially took on a journalistic approach, it’s clear from the beginning that the programme is in fact a biographical journey into Khan’s past.

If you’re used to seeing Khan on stage as a dancer and are worried about his presenting credentials, fear not, he’s just fine – and the dance is not forgotten either.

‘Curry House Kid’ is a documentary that doubles up as a dance film and as Khan follows his roots, back to his childhood, he uses his findings to choreograph a dance inspired by the stories he hears, which he turns into a full scale performance at the end of the film (so, do watch until the credits roll!)

Khan digs deep, sharing some very personal anecdotes from his life as an immigrant’s son, balancing the demands placed on him to work as a waiter, while wanting to pursue his passion to be a dancer.

Emotional and moving, as well as hearing from Khan and his parents, he also meets some of the residents who are still part of the Bengali community in that part of London, including activist photographer who explains the extent of racism in the area and the highly publicised murder of Altab Ali which led to mass protests in the community that eventually turned into the area being renamed as Bangla Town.

Some of the stories are heart-wrenching including that of Yusaf, who became an onion cutter at the age of 11 and is still working in the kitchens today, 40 years on. His story isn’t unusual as Khan explains: ‘Within a month of him arriving in the UK with his father, his father died, he couldn’t speak the language so the only way to survive was to work in a restaurant.’

Khan’s own experiences were spent in a more front of house set up, attending to the customers.

He recalls: ‘They would get drunk, go to curry houses and abuse staff, it was part of the culture and if they didn’t do it, it wouldn’t be a goodnight.

“Every Saturday they would come at 11.45pm knowing we shut at 12. A lot of them were the fathers of kids I was at school with. They would drink as much as they could in the pub beforehand, and then cause drama until 2.30am. The police would come an hour later, they wouldn’t get arrested but the police would ask us, what did you do to them?”

The one-hour documentary packs in the content – and one of the most interesting moments is when Tania Rahman, the only female restaurant owner in the programme and part of a younger, new generation of Bangladeshi restaurateurs is invited to advise the male curry house owners on how they could ‘modernise’ their offerings. Something Khan believes is the only way they will survive.

The programme draws to a close with a performance, Khan’s own take on the famous ‘The Last Supper’ painting by da Vinci where he explores the nuances of eating out and the roles different people play in the experience. Within it he returns to some of the iconic head rolling scenes he created for his show ‘Desh’ and combines it all into a mesmerising group performance.

‘The Curry House Kid’ is an example of how the documentary formula can be completely overhauled, creating a TV programme that’s thoughtful and unexpected.

Akram’s openness and honesty paired against the visuals of the movement scenes make watching this a satisfying and nostalgic experience that you should make every effort to watch.

Privacy & Cookies: This site uses cookies. By continuing to use this website, you agree to their use.
To find out more, including how to control cookies, see here: Cookie Policy
← ‘Vagabonds: My Phil Lynott Odyssey’: Robert Mountford to perform one-man tribute show at Vibe for Philo Festival
The Asian Culture Vulture end of year 2018 Quiz… are you an Asian Culture Vulture? 🤗 THE ANSWERS! →