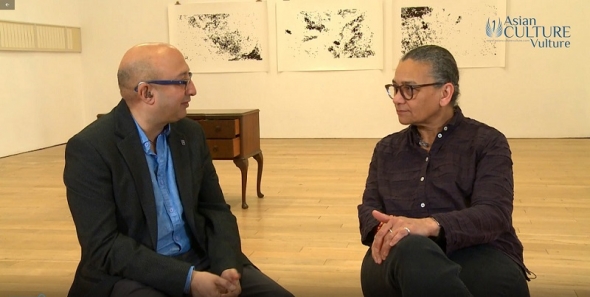 As well as curating two other artists – Magda Stawarska-Beavan and Rebecca Chesney – whose work is also on display, the first black woman to win the Turner Prize, has created new work herself and talks about this and her artistic vision in general…

TUCKED away almost at the very end of England is Newlyn Art Gallery and The Exchange in Cornwall, and it currently hosts the work of three artists in ‘Invisible Narratives’.

One of them, Lubaina Himid, the Turner Art Prize winner 2017, talked to acv about curating the exhibition, her latest work that can be seen there and why she selected two other artists to display work alongside her.

You can watch the video below and/or read this short piece that gives you some insight into the exhibition and the other artists.

We do urge you to watch the two interviews as both Himid and Magda Stawarska-Beavan discuss the ideas behind their works.

Himid is perhaps most famous for looking underneath everyday objects and things and finding meaning that is not always immediately apparent or visible.

She was awarded a CBE and was recently elected to the Royal Academy of Arts and is widely recognised as one of Britain’s most globally renowned artists.

As a keen observer of the black experience, especially that of the diaspora, outside of Africa, she documents a history and a people often at the heart of trade and exchange, but rarely acknowledged or given due respect.

Both artists for her are documenting experiences and ‘listening’ and ‘looking’ at things beyond simple surfaces.

“They are intrigued by what is there – but not necessarily what you would know is there.

“So, there are several things happening – sometimes, you are in a place and it seems familiar but you don’t know why, or you are near a building and it doesn’t seem familiar, but there is something that you hear or see that reminds you of something else,” Himid tells www.asianculturevulture.com in the video interview.

In ‘Invisible Narratives’, her largest work at the exhibition, a seemingly innocent dressing table (‘Feeling Colour by Touch’) is transformed into a narrative about people and things and reminds observers to look beyond the surface of things – a powerful statement in itself.

“I’ve become much more interested, again, in audiences being performers, so I was trained in the theatre and I’ve always made work with audiences in mind,” she explains in our interview.

Stawarska-Beavan talks about the soundscape and desk installation – ‘Translating the City; Sounds of the sea’ – she explains how Himid and colleague Ekin Sanac were asked to record their feelings about Istanbul at one point in time in 2014, and on the desk there is video of the sea and a map of Zanzibar – Himid in our interview talks about the relationship she has to be the place of her birth. She left Zanzibar when she was just four months and travelled to Britain with her mother.

Stawarska-Beavan tells acv in her interview: ‘Most of the time I record contemporary cities from very a personal point (of view)… and make compositions out of those everyday sounds…it’s a sound capsule of that time but then of course, the listener brings their own sort of experience or narrative from the past to the present.”

It shows the sea around South Walney Island off the coast of Cumbria – wild, brutal and desolate, it reminds us that nature has a voice and we ignore it at our peril.

As well as this, in the upper gallery, she has a new line drawing depicting the mean sea level recorded at Newlyn’s Tidal Observatory from 1916-2017 (‘With far-heard whisper, o’er the sea’) and perhaps yet more starkly, deforestation in the Sierra Nevada, US (‘Far I, II, III’) – as represented by screen prints of satellite data from the region.

‘Forewarning’ is something of an assault on the senses – the film to the left overlooks a gull colony that failed last year, Chesney told us.

“It is also about time, things we have lost already and things we will lose in the future.

“I have always made work about landscapes and the human relationship with nature.

“I am interested in the politics and management of land – how we work it, how we perceive it and the wider affects we’re having on wildlife and ecology.”

All three artists remind us that there is a world beyond what we might observe as practically useful and that we ignore this world and ‘its forewarnings’ and ‘traces’ at a cost.

Privacy & Cookies: This site uses cookies. By continuing to use this website, you agree to their use.
To find out more, including how to control cookies, see here: Cookie Policy
← The Bong effect; what happened to Diversity?
Oscars 2020: History is made with ‘Parasite’ – first foreign language film to win best picture and collect four in all – director Bong Joon Ho on ‘beauty of cinema’ and his next ‘filim’ (T videos); Mindy Kaling, Utkarsh Ambudkar and Lilly Singh… →