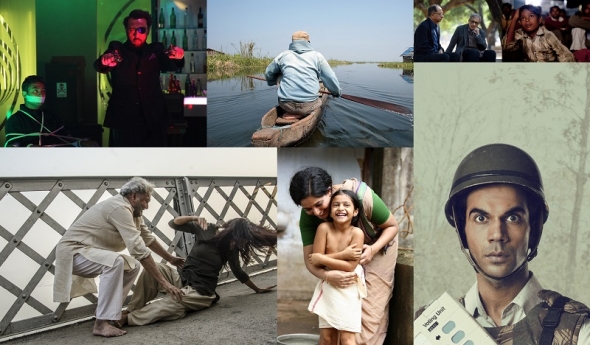 Lady of the Lake

A FESTIVAL favourite in many ways, this feature from Manipur, from the often forgotten north east of India, is surprising as it is powerful in its own way.
Documentary feature maker Haobam Paban Kumar makes the transition to fiction, with little concession to either forms in a sense.
His actors are non-professionals; there is dialogue – how much of it is scripted, it’s hard to judge; the camera lingers, there is little musical background and while it meanders at times almost literally – at just 72 minutes, it matters not and the cinematography exploits an area of considerable natural beauty.
Despite all this, Kumar still pulls you in and elicits sympathy for the main characters, especially the wife Tharoshang (Sagolsam Thamabasalsang) whose husband Tamo (Ningthoujam Sanatomba) has man flu at the start and does not appear to want to shake it off…(men everywhere are the same!)
Beneath the domestic squabbles is a drama that has a deeply political dimension.
The authorities have been clearing the phumdis (floating vegetation) on which traditional houses are created and the community is left angered and defeated as their way of life comes under attack.
Tamo finds a gun and there is talk of resistance. A rather abrupt ending leaves only more questions. Intriguing and beautiful. (SR)
ACV rating: *** (out of five)

PROFESSOR AMARTYA SEN is probably one of the foremost public intellectuals of our age and this documentary film made by academic Kaushik Basu does some justice to the Nobel Laureate.
The overall production quality lets down a film which has decent content and interesting contributions from among others, former Indian prime minister Manmohan Singh.
Professor Sen has had an amazing life – he was schooled at Shantiniketan, inspired by the greatest of all Bengali intellectuals, Rabindranath Tagore, grew up in Dhaka, when it was part of the British Empire, and met Mahatma Gandhi as a youngster, and fought off cancer when he self-diagnosed at 18.
He has taught economics at the world’s top universities and was for many years Master of Trinity College, Cambridge.
Wise, liberal, cultured, and most all, like his most striking work, steeped in humanity and thoughtfulness, he is a figure all should respect and hear.
But as with many things, his left of centre leanings and criticism of the Indian political establishment, especially the BJP, has made him a more awkward figure than he might be, especially in India itself.
This film does not really cover that but is something of a documentary biopic. It lacks depth and is too superficial, but it does give some glimpse of a great mind whose thinking elevates us all, if you care to listen. (SR)
ACV rating: **

AMIT V MASURKAR’S follow-up to ‘Sulemani Keeda’, ‘Newton’ is a political satire with enough comedy to please audiences seeking sizeable laughs – often bigger than this largely subtle film might lead you to expect, judging from the screening I attended – and the kind of sharply observed character study demanded by arthouse fans.
Focusing on idealistic Newton, a conscientious government clerk determined to get polling booths out to Adivasi (tribal) areas most election officials have little interest in reaching, our titular hero refuses to accept the complacency and disinterest of his superiors, but is also forced to rethink his own righteousness and liberalism.
The film doesn’t settle for pat answers, and along the way, there’s barbed questioning of the status of English in India, digs at TV-delivered consumerism, and the larger political apparatus – is voting the only way to affect change? Does everyone need to vote? Can India respect the internal laws of its minority communities? If its narrow focus on the conflict between Newton and a jaded police/army official means there is little space for the Maoists – constantly mentioned but never seen or heard from – to get a look in, this is still one of the most tightly scripted Indian indies of late. You’ll be debating long after the credits have rolled. (SC)
ACV rating:****

SIGNALLED by the casting of Satyajit Ray regular Soumitra Chaterjee, ‘Bridge’ is carefully, lovingly steeped in the rhythms of Bengali art cinema.
Exploring the events that follow when an elderly widower (Chaterjee) rethinks jumping off a bridge when he sees a young woman (Sandhya Mridul) attempting the same, after dragging the silent woman home to nurse her, the film charts a strange sort of co-habitation between two fragile characters.
It gives Bridge plenty to work with thematically – suicide, gender, age, loneliness – and first time director Amit Ranjan Biswas creates a film of sensitivity. But Chatterjee is left to walk around looking merely bewildered, while the shaken Mridul’s backstory is scant, making it hard to care for her how we might want to. On paper, it’s a life-affirming story of two lost souls; on the screen, it’s a little stuck, keeping its characters’ emotions at a tasteful distance. (SC)
ACV rating:***

THIS FLY-ON-THE-WALL documentary follows two travelling cinemas in India and the men who struggle to make ends meet as televisions begin to find its way into rural homes. As they desperately cling onto this dying trade that has sustained them all their lives, we meet Prakash, a cinema projector engineer whose passion for the mechanics of cinema is infectious. Although he too is suffering from the lack of business, his optimism and philosophies give hope that life must go on. And so in an attempt to adapt, the men trade in their crumbling projectors and dusty film reels for NEC cinema projectors and hi-tech laptops. While it works for one, another is unable to master the complicated new-age tech and reverts to his old ways. It’s a small, heartwarming documentary of passion, hard work and community in an increasingly commercialised world which has taken the film to international accolades such as the Special Jury Prize at Cannes Film Festival 2016 and is not one to be missed. (TM)
ACV rating ****

BILLED as a ‘mockumentary’, this new film, Badman explores the attempts of Gulshan Grover, the legendary villain of Bollywood to make it as a hero in an industry that perceives him to a ‘Badman’.
Grover in the film has two dysfunctional sons, one a leery DJ and the other one an inept second director to Farah Khan.
The film begins with Grover trying to have a shower just before a big birthday (don’t know which one) and the water runs out, and his two man-servants try to get the problem sorted.
We have some weak jokes about his films being on TV on his birthday and how he laments that he’s happy to get a kicking from the strong hero like Dharmendra but to get beaten up by skinny heroes really takes the biscuit!
His two sons have an eye on their inheritance but Grover decides he will use his money to launch himself as a hero. (Not sure if this is true, but it’s in the film)
Who will watch this ‘nonsense’ of a film? Asks Farah Khan, only to be told that if Amitabh Bachchan can play a child in ‘Piku’, why he can’t he play the role of a hero?
And so begins the transformation. Grover goes around all of the Bollywood fraternity lining up Farah Khan (song choreography), Chunky Pandey (villain), Rishi Kapoor (advice, ‘play characters aged 90-100’) and there are some lovely cameos. It’s all a bit madcap but there are some interesting revelations about how Bollywood works. (SB)
ACV rating: ** ½

ACUTELY observed, finely acted and a rather idiosyncratic take on a crime caper-type thriller, veteran director Adoor Gopalakrishnan, delivers a fine cinema experience for anyone who prefers thoughtful cinema to just munching popcorn and forgetting the world.
Set in Gopalakrishnan’s home state of Kerala – as all his films are – the social milieu will be familiar to native Malus (the nickname for people who speak the state language of Malayalam as this reviewer’s family does…).
Purushothaman (Dileep) is a gentle soul, but lacks confidence and direction. Unemployed for years, despite having a B.Com, he has slipped rather uneasily into an inert existence, cushioned by his teacher wife and her extended, landed family with whom the couple and their young daughter live.
A job in Dubai completely changes his fortunes and with it, his relatives’ expectations.
Suddenly the world of consumerism, avarice and cloying human relations built on materialism emerge – the consequences are tragic as Purushothaman decides a criminal course of action will lead him to the promised land.
In the Q&A following its BFI screening, Gopalakrishnan talked more about the above, but conceded it was a love story.
It’s his sheer ingenuity as a director – and the only other Indian director apart from the luminous Satyajit Ray to hold a Sutherland Award from the London Film Festival – that makes that entirely plausible. (SR)
ACV rating: *** ½

A review/interview article with Subhashish Bhutiani about his film, Hotel Salvation’ will appear close to its UK release date on August 25

Tasha Mathur writes…In an intimate Q&A at new LIFF’s newest venue, Crouch End Picturehouse, I interviewed Amit Ranjan Biswas, the director of the award-winning film, ‘Bridge’.
Much like the film is about bridging the gaps between people and creating connections, the Q&A brought about an insightful discussion about the importance of spiritual healing vs. clinical medicine, particularly when it comes to mental health.
With many sharing their thoughts and initial reactions to the film, it was clear to see how much of an impact ‘Bridge’ can have on viewers. It’s one that makes you contemplate and question how we interact with people on a deeper level through the little things such as touch, selfless service and patience.
Let’s hope Bridge continues to inspire people to speak out on mental health and create lasting connections amongst its audiences.

Would you date a bald man? Watch #egghead @weLoveBIFF tomorrow it may inspire you to! Here's my @loveliff review: https://t.co/AwogBOka7x

Privacy & Cookies: This site uses cookies. By continuing to use this website, you agree to their use.
To find out more, including how to control cookies, see here: Cookie Policy
← ‘Xenos’ – Akram Khan’s lament for Indian soldier has a message for us all… (interview)
Voices at The Globe – young and often marginalised take centre stage with Shakespeare and inspire →