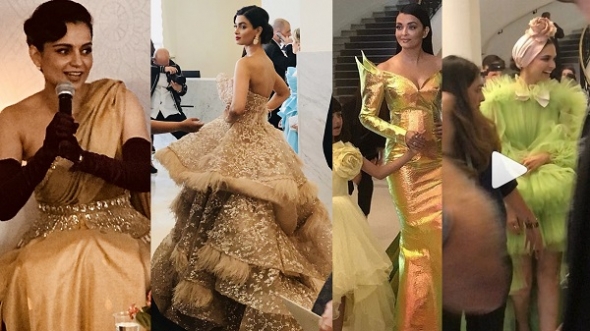 From Bollywood beauties to street style stars, the 72nd Cannes Film Festival was a visual feast for fashion fans

SO, HERE’S the thing, I adore fashion. I love star spotting and I’m always on the watch for who’s wearing what, but oh how naïve I was.

It wasn’t until I attended Cannes this year that I realised what an extravagant circus the Red Carpet at the world’s most glamorous film festival actually is.

You see for all these years I thought celebrities paraded their way to premieres, then sat down and enjoyed an evening’s entertainment at the pictures.

But no, it turns out they’re there just for show, and as soon as they’ve strut their stuff, they are driven back to the comfort of their hotel.

I know this because while on my Cannes fashion assignment for www.asianculturevulture.com, I spent three days inside one of the town’s flagship hotels, residence of many a Bollywood star and watched them leave for the main event, get papped and return again. (And there was me worrying how their frilly trails fit into the cinema seats.) Haha.

I also watched two major Red Carpet world premieres (Jim Jarmusch’s opening night movie ‘The Dead Don’t Die’ and Dexter Fletcher’s ‘Rocketman’), spent hours scouring the streets in search of the trends on the ground worn by the non-celebs, attended a few swanky parties and an international fashion show. Armed with this crucial research I present to you, my highlights of Cannes Fashion 2019.

There were no saris on the red carpet, but there was plenty of sari-themed attired worn for daytime events. Bollywood actresses Kangana Ranaut and Diana Penty both participated in talks at the Cannes Film Festival India Pavilion wearing garments that were a modern take on the traditional South Asian sari, in fact Kangana’s was spookily similar to the sari inspired gold jumpsuit I wore at Cannes by British Designer Puneet Bhandal.

When in doubt, wear pastel. It’s not too garish, but still shows some personality as seen in the fluffy blue dress worn by Thai actress Min Pechaya and rainbow pastel gown seen on Victoria’s Secret model Elsa Hosk. Leading the soft shade fashion pack however was Dame Helen Mirren, 73 years old and totally rocking a pastel pink coat, she even opted for a pink wash in her hair.

Well, we know where our Helen got that idea from. Me obviously. This is possibly after seeing me captured in none other than The Hollywood Reporter where I was spotted for their Cannes Street Style feature.

OK! OK! Let’s talk Bollywood. Hands down the celebrity with the most innovative style by far was Deepika Padukone. On the red carpet, she treated us to a flamboyant dress by Dundas, with its mammoth bow it made her look like a giant present (watch our Deepika on the red carpet video here) and followed it up with a fun and frivolous net frock by Italian Designer Giambattista Valli. Both looks epitomised everything fashion should be – fun.

Next up on my list of Indian actress faves was Diana Penty, after a few years of radio silence, the ‘Cocktail’ star emerged looking every inch like an A-list lead, and despite her sleep deprivation (see my interview with her to see what I mean) she looked flawless in her vintage styling. Huma Qureshi too made quite the entrance in a grey layered gown but there no photos by me because when she made her entrance she needed so much assistance with her dress that all her helpers blocked the views.

It’s no surprise that Priyanka made no impression whatsoever in her first red carpet outing of the year. The black sequin frock by Robert Cavalli (which again you can see on our ‘Rocketman’ video from her entrance) was the dullest outfit I saw for the duration of my trip, but I’m not surprised because as much as I like Priyanka as an icon, her dress sense continues to bore me. It’s rare she wears something that actually suits her, I don’t know who her stylist is but she could do with getting a new one. (Diana Penty’s perhaps?)

And, let us take a moment to appreciate two of the looks worn by L’Oreal Ambassador Aiswarya Rai Bachchan. She made her first entrance dressed not too dissimilar to a mermaid accompanied by her daughter Aaradhya, the pair shimmering in iridescent yellow. I particularly loved this look by Jean-Louis Sabaji because it was ‘fancy dress’ more than high-fashion and clearly something her daughter and millions of other little girls would be awe in, so good on her for dressing for them, rather than the fashion commentators. Her second look a white feathered dress. It oozed glamour but at the same time, there were so many women wearing white, it felt a little ordinary…

WHITE ALL RIGHT ON THE NIGHT

Away from the premieres, film screenings and parties there are a host of other events taking place during the Cannes Film Festival, including fashion shows. One such affair was Tiffany McCall’s Red Carpet Fashion Week held at the iconic Carlton Hotel. A five-hour event it featured designers from all over the globe from Brazil to Bangladesh. Dubai based Bengali Jewellery brand 1972 by Niharika Momtaz was one of those on the runway showcasing intricate handmade jewellery for men and women, while colourful attire was the theme of a collection by Parisian based Anne Kervall Couture.

All in all Cannes was one giant fashion extravaganza, with the Croisette swarming with stylish individuals, many connected to the film industry and many simply there to stand out and be counted.

There’s no doubt that film and fashion go hand in and Cannes. Now in its 72nd year it’s a chance to immerse yourself in both – and that’s before you even hit the town’s designer boutiques, that’s a whole new world of fabulous fashion waiting to be explored. Perhaps next year?