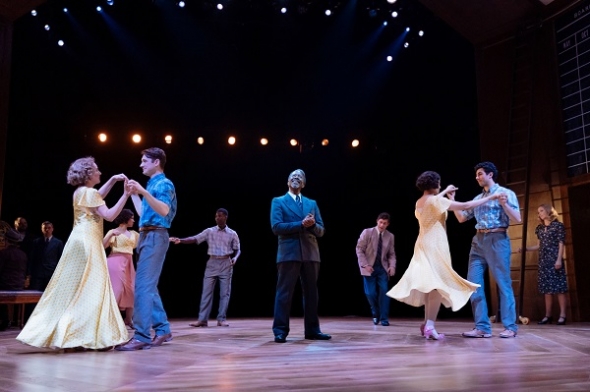 DESCRIBED as ‘vaudeville’, the play, ‘The American Clock’, is a tour de force and an awesome exploration of the Depression years in America and the impact of the Wall Street crash until the Second World War.

Written by one of the greatest playwrights of the 20th century, American Arthur Miller, the show is currently running at the Old Vic Theatre, near Waterloo, London, until March 30.

As you enter the Old Vic – if you can get over the fact that it being renovated and the loos are outside – the ambience is imposing.

ACV was seated at the back of the stage and you have to walk across the stage to get to it.

It’s an arresting set designed by Chloe Lamford featuring a piano in the middle, black boards with stock prices and ladders to enable you to get up there. Actors move around the stage and props come on and off.

There is a live band playing to the right of the stage (as we face it) and the show begins with actor, Clarke Peters* as Arthur Robertson, a financial director and MC of sorts, who gives us a narration of what’s going on with helpful placards to posit the timeline.

Robertson tells us that ‘according to the author the play is made up of his memories,’ and in 1929, it appeared that every American wanted to get richer and richer, and thought the dancing and music would never stop. There is a relentless and limitless optimism and everyone is caught up in it.

A young black shoeshine man, Clarence (Abdul Salis) wants to invest his last ten dollars on General Electric although he is urged to ‘take all your stock and sell it’.

Miller also drew from Studs Terkel book, ‘Hard Times: An Oral History of the Great Depression’ – and the play tells the story of three families, or maybe one family – the Baums played by three sets of actors: One American-Jewish, another African-American and the third a South Asian family – who have to move from Manhattan to Brooklyn as their fortunes decline. (That is the theatrical sleight of hand that makes the point that it could happen to anyone and we all feel the economic depression).

An ensemble cast of 18 actors and four musicians help shape the whole story which is like a movie and the choreography by Ann Yee moves us on… there is a corporate man, Ewan Wardop, who wants to leave his job as a director of a firm, and tap dances his way out. The family members have to go on a welfare programme, while the son wants to travel America à la Mark Twain and all he can see is poverty, other scenes of woman playing cards, how the young woman hears about her brother’s suicide as she walks into the posh club, while dry jokes are cracked about “booking a room on the 19th floor – is it for sleeping or jumping?”; farms being repossessed, having to enter dance marathons (reminiscent of the 1969 film, ‘They Shoot Horses Don’t They?’).

There are a lot of characters and scenes race by, as the decades pass but this is a panorama about the American dream and the show, wonderfully directed by Rachel Chavkin is engaging and engrossing, catch it at the Old Vic!

*(his role is now being performed by actor Sule Rimi)

Privacy & Cookies: This site uses cookies. By continuing to use this website, you agree to their use.
To find out more, including how to control cookies, see here: Cookie Policy
← Bollywood asianculturevulturevibes – from our Mumbai correspondent: ‘Baaghi 3’, ‘Angrezi Medium’, ‘Kaamyaab’, ‘Sooryavanshi’…
Riz Ahmed at Berlinale press conference on new film, ‘Mogul Mowgli’, being ‘dumped’ by Britain and an ‘unapologetic brown film’ →