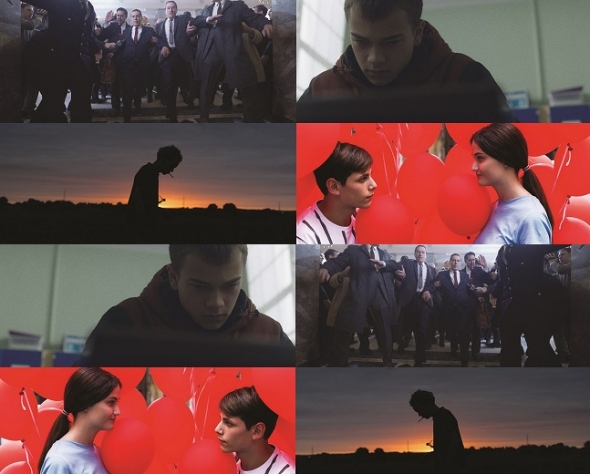 Our reviews from this year’s 63rd London Film Festival…

The Irishman – Absorbing and involving study of an ‘ordinary’ hitman

THIS all-star production is sublime and quietly brilliant – as it mostly is with director Martin Scorsese at the helm.
You expect a lot and much is delivered in three and half-hours. Robert De Niro as the hitman ‘Frank’ is simply superb. Al Pacino – as the corrupt and real-life union boss Jimmy Hoffa – is also fabulous – and perhaps to lure Joe Pesci out of retirement for a last hurrah (of sorts) is an achievement and boy, was it worth it.
These four bring a certain gravitas to proceedings – see it in the cinema, on the big screen as it was supposed to be viewed. It comes out in late November on Netflix and while it’s great that anyone in the world can watch this film which has been hailed in many quarters as a classic – it does have a few niggly blots. They ain’t biggies by any means – it’s a bit too long, it’s a little convoluted and it lacks the redemptive quality and relative brevity in story telling of ‘Goodfellas’ or ‘Casino’ (if memory serves me correctly). But these are quibbles. You are watching a master at work and those in front of the screen know and appreciate that – it shows. There is much beneath the surface from Scorsese – at the end of the day, the US is a nation founded on violence – most nation states are – but many have evolved beyond that…
ACV rating: *** ½ (all out of five)

LOOK out for this when it goes on release, if you’re keen to see a British film with style, purpose and a strong social edge.
Writer-director Henry Blake is a youth worker and continues to work in the field. At the Q&A of the film’s second screening on Wednesday (October 10), he told the near packed theatre that he wants to continue his work with young people. Tellingly, he said he wanted to get the best out of this mostly new cast. “I said to them that in the world of these children there is no ‘action’ or ‘cut’.” Conrad Khan plays the lead – ‘Tyler’ . He’s a decent sort, close to his younger sister whom he looks after, and respectful and considerate of his single-mum’s work commitments – a late night cleaner at a hotel. Money is tight but they get by. Tyler’s main problem is that he finds school boring and unhelpful. Despite two dedicated (black) teachers – he falls into the hands of a white drug dealer who takes on the authority figure role – from here on in – it’s a terrifying and blistering downward spiral. Blake handles all this with skill and sensitivity. Very powerful and timely. Both Blake and Khan are talents to monitor.
Acv rating: ****

ITALIAN director Claudio Giovannessi shows no little skill in bringing this coming of age mafia tale to the big screen.
In Francesco Di Napoli he has a natural lead. Playing ‘Nicola’, he perfectly exudes the charm and menace that is required of his role. The issue is that this young man, 15 only, wants to have it all and now. He acquires a beautiful girlfriend (Viviana Aprea) and has his crew faithfully by his side. As a study in how such young men are recruited to the cause, it’s insightful and disturbing – adapted from ‘Gomorrah’ (TV) writer Roberto Saviano’s novel, it feels authentic and real. But Daniele Cipri’s tight cinematography means little is spared and the violence is not fetishized, even if Nicola and his young charges (including his even younger brother) fall in love with guns – the more lethal the weapon, the more dangerous it all becomes. Chilling but very watchable.
Acv rating: ***½

PART documentary, part narrative fiction – this John Skoog film has a charming quality even if the tale – such as it is – amounts to little more than a visual essay about life, landscape and rural inertia. Shot in Southern Sweden and Skoog’s farm home, its three-dimensional European perspective may not be in any manner political or there by design, but the fact the film is peopled by immigrants, not just from the EU but Russia, as well, shows a continent that lives, works, loves and mourns together too and will continue to do so… To us Brits (like me), it feels nostalgic already – from a different era almost. The time to lament about our impending departure from the EU is already over…
Acv rating: **½