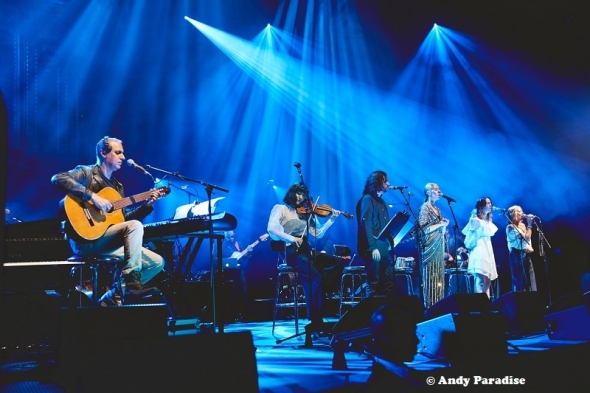 JUDGING by the volume of whoops that filled the auditorium at the Royal Albert Hall last night (September 26) for the 20th anniversary concert of Nitin Sawhney CBE’s album ‘Beyond Skin’, it’s surprising the roof didn’t blow off.

Around 5,000 Nitin super fans packed into the iconic venue to witness the album (released back in 1999) played in its entirety for the first time. Accompanied by live musicians, a choir and special guests, it was a joyful celebration of the incredible achievements the composer and musician has made over the last two decades.

In between two distinct sets, the first that saw Sawhney perform some of his other much-loved tracks such as ‘Sunset’ and ‘Moonrise’ from his second album ‘Prophesy’ and the live rendition of ‘Beyond Skin’, he was joined on stage by presenter Nikki Bedi for an interview about the album, which she described as “life-defining for people across the globe”.

Bedi began by asking Sawhney to explain his striking choice of album sleeve, which features a plaster caste statue of him, frozen in a petrified scream (see the lower picture of the above). He replied that it represented a “scream for identity, wanting to be heard for who you are and not how people project you to be”.

There’s no doubt that Sawhney has embraced this sentiment in all his achievements since then, which include being an Associate Artist at Sadler’s Wells, where earlier this year he presented his album ‘Dystopian Dream’ as a dance performance, as well as composing over 50 film and television scores.

‘Beyond Skin’ as a debut album then, is even more of an extraordinary achievement when one considers what it kick-started.

Just before he opened the set with ‘Broken Skin’ Sawhney told the audience that the album was ‘the most emotional thing I’ve ever created’. Featuring the voice of his parents because he wanted to ‘honour their immigrant story’, and a host of collaborators with whom he still performs with, the evening was a journey into nostalgia.

Picking highlight performances from the show is nigh impossible but Tina Grace’s sublime vocals on ‘Letting Go’ sent tender echoes throughout the hall while Nina Miranda’s angelic vocals on ‘Homelands’ (a track we were treated to twice, during the album performance and as the encore) sent shivers down the spine.

All of the guests that joined Sawhney on stage, which included the London Community Choir, rapper Spek, flautist and singer Ashwin Srinivasan, strings player Everton Nelson from 4 Hero and an intern of Sawhney’s Theo, who performed the double bass on ‘Tides’, were outstanding but it was the women that truly stole the show.

Joining Grace and Miranda were violinist Anna Phoebe and Eva Stone who both delivered passionate performances. It was singer Nicki Wells though, who performed several tracks in Hindi including ‘Nadia’ to endless applause, which Sawhney said demonstrated ‘Beyond Skin’ – that struck the biggest chord with the audience.

Everyone in the room had a connection with the tracks: whether they were affected by one song or the full ‘Beyond Skin’ album, it was a trip down memory lane and no doubt therapeutic for many, closing with a real sense of hope, that although the future is uncertain in many respects, all is not bad as we have new music by Sawhney to look forward to.

He announced that he’s just signed a three-album deal with Sony Music, the first of which will be called ‘Immigrants.’

No pressure Nitin, but we’re all waiting with baited breath and can’t wait to hear the sounds of your next chapter!

Entered our Baahubali competition – you can win tickets to see the Indian mythological blockbuster at the Royal Albert Hall on Saturday 19?

For the competition, enter before 11.59pm Sunday, September 29.

To book tickets, click on the link below or any of the banners on the site. Good Luck and see you there!