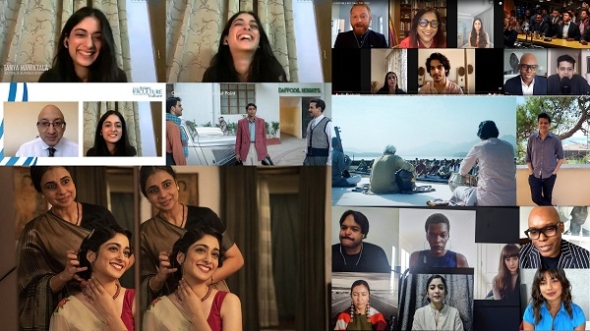 THERE was another award for the Indian film, ‘The Disciple’ and the stars of ‘A Suitable Boy’ and director Mira Nair helped to bring the curtain down on the Toronto International Film Festival (TIFF). The festival ran from September 10-19.

The main People’s Choice Award went to ‘Nomadland’ by American director, Chloé Zhao and the runner-up was ‘One Night in Miami’ – which www.asianculturevulture.com reviewed as part of its TIFF20 remote coverage. This film is coming to London Film Festival (October 7-18) and is the directorial debut of actor Regina King.

It represents another triumph for King, who collected her fourth Emmy last night for the HBO series, ‘Watchmen’. The show which explores the issue of race in the US in a futuristic setting and is based on a DC Comics series of the same name, scooped 11 awards in all.

The second TIFF People Choice runner-up was ‘Beans’ by Canadian director Tracey Deer. It is about the 1990 Oka Crisis in Canada, which pitted indigenous communities against state authorities and Deer who hails from a native community lived through the troubles.

Nair and the prominent actors behind ‘A Suitable Boy’ (‘ASB’) were all part of a TIFF zoom style chat as the episodic TV series, which debuted on BBC One last month, helped to formally close this year’s hybrid version of North America’s largest film festival on Saturday (September 19).

Nair was joined by Ishaan Khatter (‘Maan’), Tabu (‘Saeeda Bai’), and Tanya Maniktala, who plays the pivotal character of ‘Lata Mehra ‘, whose mother is searching for a suitable boy for her daughter to marry.

For Nair, Lata represented a young India trying to find her own identity a few years after the British left (1947) and about to go into its first election in 1951-1952.

The group lamented not being in Toronto itself and Nair said the festival was special to her ever since it had screened ‘Salaam Bombay’ (1998) and she had married in the city with the help of Canadian Indian origin director, Deepa Mehta.

Tabu said she had fond memories of eating Japanese food in the city when ‘The Namesake’ featured at TIFF in 2006 and loved the role of being the courtesan in ‘A Suitable Boy’.

And Nair and her cast joked they would go next there next year – “You would have had such a riot on the red carpet”, quipped Nair.

TIFF programmer Jeff McNaughton said it was the first time that the festival had ever closed with an episodic series. It is expected to drop on Netflix in October now. The chat was also part of TIFF’s Share Her Journey initiative which highlights the contribution of women, both in front of and behind the camera.

The festival also conferred a Tribute Award on Nair along with a group of other actor and director awardees. She won the Jeff Skoll Impact in Media Award.

Before the festival started, Maniktala was named as a TIFF Rising Star and she spoke to acv about her selection and growing fame. (See video below).

‘The Disciple’ fresh from its success in Venice, where it won a screenplay award and international critics prize, saw TIFF present it with an Amplify Voices Award. It is director Chaitanya’s second film after ‘Court’ (2014).

The jury commented: “Masterful in its restraint, this film about a struggling classical Indian musician explores the tension between traditional discipline and the contemporary impulse to be instantly validated. ‘The Disciple’ is a visually sumptuous and insightful journey into the life of an artist.”

The film is coming next to London Film Festival (LFF) and is executively produced by Oscar winner Alfonso Cuarón. (See our LFF preview).

Cameron Bailey, TIFF artistic director interviewed Tamhane and said it was one of the strongest films he had seen this year and joked that it was an Indian version of ‘Whiplash’. It is also a film about a musician and his teacher and was the breakthrough success for director Damian Chazelle (‘La La Land’).

Earlier, Bailey also discussed Hollywood and Bollywood star Priyaka Chopra’s career as part of Share Her Journey and being a festival ambassador and multiple festival attendee in an Instagram Live Chat on September 11.

Editor’s note: Toronto is a great city and the festival is friendly and welcoming and last year we talked to many stars – and first went for TIFF 2018 – we hope to be back! (Sailesh Ram)

One Night in Miami review
http://asianculturevulture.com/portfolios/tiff-2020-one-night-in-miami-inspirational-and-unforgettable-like-the-men-portrayed-in-this-brilliant-film-which-is-a-meditation-on-power-and-how-to-use-it-review/