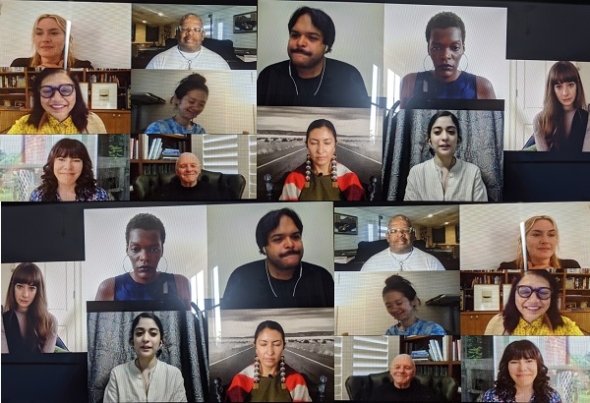 DIRECTOR Mira Nair is all set to receive her Toronto International Film Festival Tribute Award this evening (1.30am BST/8.30pm New York/6am IST) and shared her incredible experience of the festival on September 11 2001 in a press conference earlier today.
Her film, ‘Monsoon Wedding’ had just been announced as the Golden Lion award winner at the Venice Film Festival, where it had enjoyed its world premiere. It was being screened to the press in Toronto on the morning of its gala presentation that evening in Toronto – but that had to be cancelled following the attack on the World Trade Centre in New York which claimed almost 3,000 lives.
“In the space of two hours everything changed, it was cataclysmic, but later that evening we came together at a dinner in solidarity,” she told the remote press conference, speaking from her home in New York.
She later talked about her relationship with Hollywood and how Indian cinema didn’t need the west or to be western to be considered successful or productive – responding to a press question.
She said: “Indian storytelling is not just about Bollywood – that is about Bombay centric – there is regional cinema whether it be from Bengal or South India and it is very vibrant and extraordinary.”
She called herself something of an “anomaly who worked in between both worlds”.
Nair is to receive the Jeff Skoll Award in Impact Media and is all set to be honoured alongside Chloé Zhao (‘Nomadland’, whose film also won The Golden Lion 2020) Kate Winslet (‘Ammonite’), Sir Anthony Hopkings (‘The Father’), musician Terrance Blanchard (‘One Night in Miami’) and Tracey Deer (‘Beans’). All these films are screening at the fest. Nair’s latest project, ‘A Suitable Boy’ closes TIFF on September 19.
Bollywood icon Tabu, who also stars in ‘ASB’ is among those presenting these awards tonight/tomorrow UK time.
You can watch the awards which are being broadcast in Canada at 8pm (1am BST) 30 minutes later on http://www.variety.com

TANYA MANIKTALA, the star of the Mira Nair-directed BBC TV series, ‘A Suitable Boy’, told young actors that they should believe in themselves and urged producers and directors to seek out new talent.
Speaking on panel as one of four actors chosen as Women on The Rise – TIFF 2020 Rising Stars, she said: “Great art that is what I am looking for. As a new person – I was not heard of and had it not been for my director (Mira Nair) I would not been here.”
Nair’s ‘ASB’, a six-part series, adapted from the novel of the same name by Indian writer Vikram Seth and which screened on BBC One last month, has two screenings on the final day of the festival – one a six-hour marathon that begins in the afternoon and another two-hour episode 1&2 later.
Maniktala, who has only appeared in an Indian web series (‘Flames’) prior to taking a prominent role in ‘ASB’ , also talked about how much she learnt from Nair and other members of the cast.
She appeared alongside Brits Sheila Atim, who stars alongside Halle Berry in her first directorial effort ‘Bruised’, Madeleine Sims-Fewer, who wrote and co-directed ‘Violation’ – a revenge drama as seen through the eyes of a wronged woman and the three were joined by Rainbow Dickerson, who has mixed native American and Thai heritage. The American stars in ‘Beans’ about the Canadian 1990 Oka Crisis which was a land dispute between indigenous communities and the state authority. Director Tracey Deer lived through the turmoil.
Videos are being added to the channel and you should be able to see both discussions on https://www.youtube.com/user/tiff

DIRECTOR Barry Levinson and Denzel Washington will talk about the careers in an In Conversation at the Festival on Thursday evening (September 17 – 11pm BST). For this, you must register to watch before September 16 – 11pm BST. (See link below)

FILMMAKERS Clare Denis and Oscar-winning Barry Jenkins come together to discuss their work on Friday (September 18) at another In Conversation at 11pm BST.
Again, you must register the day before 11pm BST (September 17).

For more details and to register for both talks, see: https://tiff.net/films?series=in-conversation-with&list

Privacy & Cookies: This site uses cookies. By continuing to use this website, you agree to their use.
To find out more, including how to control cookies, see here: Cookie Policy
← VS Naipaul – Colossus of English literature leaves deep and lasting mark, passes away to Tennyson and tributes…
Women in the arts conference draws music executives and female talents to strengthen industry voice →