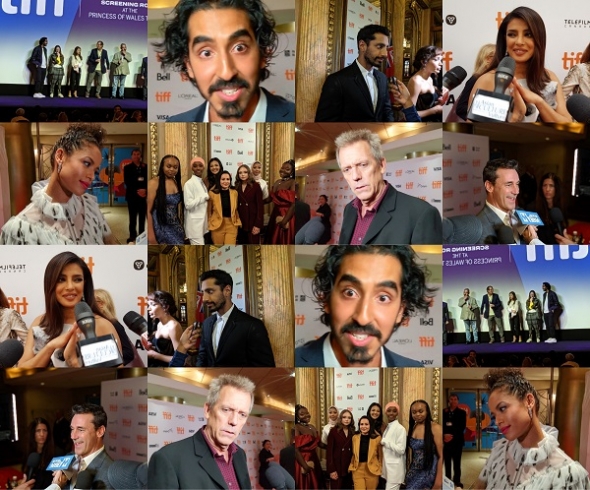 PERHAPS it isn’t a great surprise that Taika Waititi’s ‘Jojo Rabbit’ took the top prize at this year’s Toronto International Film Festival (#TIFF19).
It’s an original film with a unique voice, but one wonders whether Europe will welcome it in quite the way it was feted in Toronto. See the acv review here.
Winning the Network for the Promotion of Asian Pacific Cinema is ‘1982’ a film by Oualid Mouaness.
Jury members headed by Beckie Stocchetti, Kanako Hayashi and Albert Shin said of Mouaness’ film that it won “for its adventurous, imaginative style and subtle, confident filmmaking, bravely juxtaposing and framing the universal innocence and charm of youth within harrowing historical context”.

And so what of our own TIFF? It was our second – but this year was represented a further leap forward – we had a camera resource and were able cover to several Red Carpets.
From the glitziest for – ‘Hustlers’ to the rather lower key Riz Ahmed starrer, ‘Sound of Metal’, which has been universally praised and snapped up by Amazon since its screening at TIFF, they were great experiences and a chance to revel in the power of cinema. First time narrative feature director Darius Marder gets a great performance from Ahmed and seriously this critic thinks a lesser performance or another actor might not have been able to deliver the film as it is and win so many plaudits. Here is the review and our interview with Ahmed on the red carpet for the world premiere.

In a sort of chronological order – it was very exciting to cover ‘The Personal History of David Copperfield’ with Dev Patel in the lead role of the irrepressible Copperfield himself – the everyday Englishman who finally excels and finds his place in the world.
It’s a lovely film and director Armando Iannucci has made a Copperfield we can all relate to, and feel as a friend. Patel is excellent and is amply supported by a striking British cast – Hugh Laurie, Peter Capaldi, Tilda Swinton and Ben Whishaw – not all of them were in Toronto, but it was great to talk to Patel about what we feel is an important moment in Representation and Diversity and aren’t we all six-year-old Dev Patels now?
It comes to the London Film Festival as the opening film on October 2 and much of this will be replayed for a domestic audience. This Copperfield film will make friends abroad – and to be a little spikey about it – reminded us why Britain and England can be a force for good and whatever happens of Brexit, we must not lose sight of principles that have held this country of ours together for a long old while – Copperfield as the everyman in our midst, affectionate, loyal, friendly and utterly unfazed by eccentricity and difference and rather partial to it! Goddamn man, live and let live!
To be on the red carpet for ‘Hustlers’ was something else…this year we covered Deepika Padukone and Priyanka Chopra in Cannes – and last year personally this writer experienced the red carpet at Cannes for ‘BlackKklansman’ but this was of another order, again.
In Cannes, you aren’t allowed to do any red carpet interviews, you can only shoot the stars as they walk up the red carpet and take notes, if you wish. It’s essentially a video job.

In Toronto, there is an opportunity to interact with talent on the carpet, but it isn’t easy with the biggest of stars and the number of crews who want a slice of the action.
These Gala premieres, as they tend to be, are hosted at the largest theatre in Toronto for TIFF films, The Roy Thomas Hall – the red carpet is long and can hold up to 60 crews in all.
Up front are the biggest media organisations and at the bottom are smaller media (in terms of numbers) and the like.
Sometimes, we were not always at the back and with Lopez – we just missed out – time, it seems, was against us.
She’s magnificent in the film – anyone who says she can’t act has to see this film. It’s much better than it might look on paper – and here is both our review and footage from the red carpet premiere. There are some comments too from Lorena Scafaria the director and cinematographer in this.
There’s already a lot on ‘The Sky is Pink’ on acv – three videos – one of Chopra Jonas introducing the film at the world premiere; our red carpet interviews and our one-to-one with Farhan Akhtar.
There is also our review published the day after the world premiere on Saturday (September 14).
At the time of going to press, it isn’t certain that Chopra Jonas will be in London for its premiere here. Director Shonali Bose will be (she told us privately), but Akhtar in our interview with him, said he is likely to be filming for Rakeysh Omprakash Mehra’s ‘Toofan’. There is a strong London angle to the film and we will be looking at that as part of our LFF coverage
Away from the strictly South Asian material, it was thrilling to actually talk to Natalie Portman and Adam Sandler and Cythia Erivo.
All three are very good in their respective films, ‘Lucy in the Sky’, ‘Uncut Gems’ and ‘Harriet’.

Sandler is mesmerising as wheeler-dealer ‘Howard Ratner’ – and directors Josh and Benny Safdie have given him a movie in which his skill as an actor is thoroughly tested. This maybe filmmaking of a slightly different era – tightly scripted, acted and delivered, with few if any lingers, visually or otherwise, it’s a tremendous ride and there is superb support including from ex-pro basketball player, Kevin Garnett and ‘Sorry to bother you‘ star, Lakeith Stanfield. See what Sandler had to say about the film before we saw it and what Stanfield says about his hair
https://youtu.be/gp7Zd7ih9eM
Portman features as a NASA astronaut recently returned from space – and this is a rich and well-delivered portrait of a woman in crisis – everything seems to pale in significance back on earth for our ‘Lucy’. Produced by Reese Witherspoon and directed by TV sensation (‘Fargo‘), Noah Hawley, this does raise some interesting questions – Portman was succinct to us but considering she said little to anyone else on our end of the carpet, a veritable coup for the bird!

Erivo’s film is about one of the totems of freedom and justice in the 19th and 20th century America and her tale needs to be more widely known. Harriet Tubman was a remarkable woman who not only escaped slavery herself but helped so many others escape to freedom. Expect lots of Oscars buzz and it may enjoy the same trajectory as ‘12 years a slave’ and Erivo herself is set to become a massive name from this film. We hope so. What she said to us…
https://youtu.be/6PBb18Z4okQ (this video may be changed as it has a technical issue presently).
Toronto itself is a beautiful city – a cross between London and New York in many ways. Friendly and full of amenities, in terms of places to eat and drink and shop, it’s the probably the best city film festival of its kind anywhere. Yes, London Film Festival (LFF) is great but it is also different, especially for us critics and journalists.
TIFF has found a great balance between the needs of those of us who cover films (and the wider business and industry of making films and selling them) and those of the public who want to watch and appreciate all kinds of cinema – from ‘Hustlers’ to ‘Rocks’, a smart British independent feature with an almost 100 per cent British black and minority cast.
Some of the films that featured at TIFF and are coming to LFF (October 2-13) and will be covered as part of our LFF coverage.

‘Bombay Rose’ and ‘Made in Bangladesh’ fall into that category.
Elsewhere we also saw ‘Bikram: Yogi, Guru, Predator’ – an expose style documentary about the man behind Bikram Yoga, or hot yoga as its been re-termed by some of its practitioners.

A conventional documentary – but no lesser for that, it’s absorbing, revealing and very interesting – why is it that Bikram Yoga conquered the US but didn’t do quite the same in UK? And why is it in India he never really mattered. Some of this is answered in director Aussie LA-based Eva Orner’s film, but she poses many others and has the latest on Bikram’s whereabouts – he remains something of a fugitive from his LA home in the US – though there are no outstanding criminal charges. It’s coming to Netflix on November 1 – and we will return to it nearer to then.

We also have ‘Jallikattu‘ and interviewed rising star director, Lijo Jose Pellissery, about his rollercoaster violent frenzy film. Well worth seeing if you like seeing dark films, you have been warned!

One final apology for saying on a couple of acv YT videos – we were covering the 43rd TIFF, it is actually the 44th and corrected later.