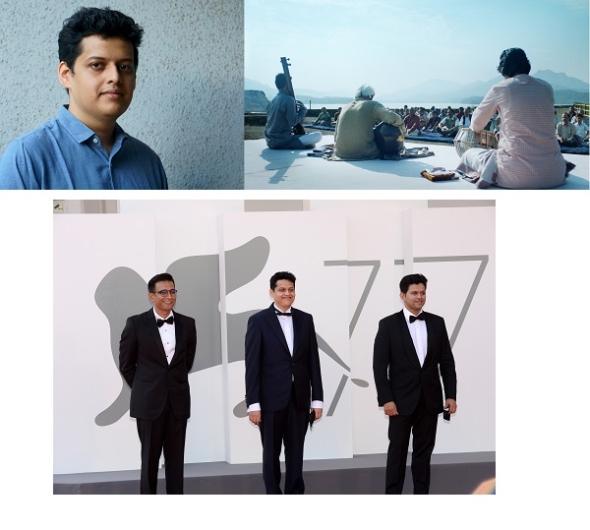 CHAITANYA TAMHANE is emerging as one of the best young Indian film directors gaining a name for himself internationally.

The 33-year-old’s second feature, ‘The Disciple’ enjoyed its world premiere at the Venice Film Festival, La Biennale Di Venezia, recently. The 11-day festival comes to a conclusion tomorrow (September 12) – look out for our wrap report and an interview with the director of the other Indian film at the festival – ‘Meel Patthar’ by Ivan Ayr.

In this, Tatiana Rosenstein sat down in Venice with Tamhane to ask about how he came to make his second feature and what inspired it.
Tamhane came through the theatre and Indian TV writing scene initially and made his first film, ‘Court’ to great acclaim in 2014. It went onto win many international awards and enjoyed a world premiere in Venice at that time.
It also came to London Film Festival where acv met him and discussed his little gem of a film. It is not just a courtroom drama but one that cleverly and almost unassumingly looks behind caste and class in what is a dispute between the state (and the police) and a poor Dalit folk singer. The film got UK distribution in 2016.
Tamhane cites ‘City of God’ (2002) by Fernando Meirelles as “blowing his mind” and inspiring him to want to make films himself. He told acv, in Venice, that his family have been very supportive and he has an uncle who is a playwright and another who is an actor, but “they didn’t expect me to make art house cinema”.
‘The Disciple’ is very different to ‘Court’ – it is about a young musician trying to make his way in the big city of Mumbai and break into the world of classical Indian music through his guru. Tamhane was paired with Oscar winning director Alfonso Cuarón by watchmakers Rolex in an artists’ mentoring programme and Cuaron went onto become the ‘The Disciple’ film’s executive producer.

www.asianculturevulture.com (ACV): How was it working with Cuarón and what did he bring to ‘The Disciple’?

Chaitanya Tamhane (CT): Alfonso was an amazing mentor who always treated me like an equal. He was involved in the making of my film right from the beginning by giving me feedback on the script and edits.
He helped me to find my cinematographer (Michal Sobocinski) and he came on board as an executive producer.
He (Cuarón) taught me to be fearless, to fight for my own vision, to be committed and go after it. It will probably take me another eight to 10 years to fully complement what I have learnt from him.
Still he is helping me on an everyday basis, navigating my career, pushing me to be more ambitious. When I first saw him using VFX or editing every single frame, grading every corner of it to perfection, I felt inspired.

ACV: Why did he choose your cinematographer? Isn’t it a bit challenging to work with a foreigner on a traditional subject such as classical Indian music?
CT: In fact, I asked Alfonso myself to help me out and find a cinematographer, as I wanted to create something different from ‘Court’. Michal Sobocinski, who is a third-generation cinematographer, is not a complete outsider. He used to work in India, in Mumbai. At the end of the day, cinema uses a universal language. It does not matter from where you come from to join the team.

ACV: Do you know the Indian classical music scene well? What made you want to make a film about it and was it difficult finding singer/actors who are familiar with the scene?
CT: I chose to hire musicians and it was a challenge. It’s very hard for a non-musician to fake the music, but it was also not easy for musicians to create an atmosphere on set to express themselves. So, during the audition I was focusing on musicians who had instincts for acting. And no, I don’t have anything to do with Indian classical music or didn’t before I began researching this. North Indian Classical music (Hindustani and distinct from Carnatic) has 800 years of history. But what we hear now, in a current form, probably goes back to the 19th century and it is practised in Mumbai for over 100 years.
This kind of music is always deeply influenced by religion, but a lot of these very traditional concepts don’t apply to the modern practice of learning music any more. In the olden days, musicians would have to stay with their Guru 24/7, taking care of everything in the house. It was not only about learning the music but about a way of living your life. You have to learn by watching him (or her) and listening to the music – which is not the case in modern Mumbai any more.

ACV: Vivek Gomber is your producer again on ‘The Disciple’ – acv met him when you both came to London with ‘Court’ and now he is known in the UK for a role in the BBC TV series, ‘A Suitable Boy’ (Gomber plays Lata’s pompous Anglophile brother-in-law) and he also starred in ‘Sir‘ which premiered in Cannes in 2017 came to the London Indian Film Festival last year…
CT: For me it was life-changing to meet Vivek. It happened when I was directing a play ‘Grey Elephants in Denmark’ and he was a lead actor in that play.
In fact, ‘The Disciple’ was an adaptation of it, which was set in the world of magic realism and mental illness. We became good friends. Once I told him “Listen, I am 24, there is a pressure on me to make a living but I want to shoot feature films and I can’t sustain myself, if I don’t do a job” And he answered: “Why don’t you write a script and I will help you to fund the writing process. I will develop it and you don’t have to work. It’s how I wrote the script of ‘Court’. After my script was ready, he said: “Let’s make it”. Why? Probably because we both were struggling with films which were being made in India and we both found them boring, predictable and we wanted to do something on our own. And he was always very clear that if you want to do different kinds of work you have to invest your own money and bring change yourself.

ACV: What is next for you?
CT: I don’t know how everything is going to unfold in the next few years. If my latest film does not return the money, it’s going to be a major fiasco for me. Filmmaking has to be sustainable to continue working on projects, away from demands of the market. I do have new ideas for the next project, but I first need to find closure with ‘The Disciple’.
The fact that the film was chosen into the main competition of the Venice film festival is a huge deal for me.