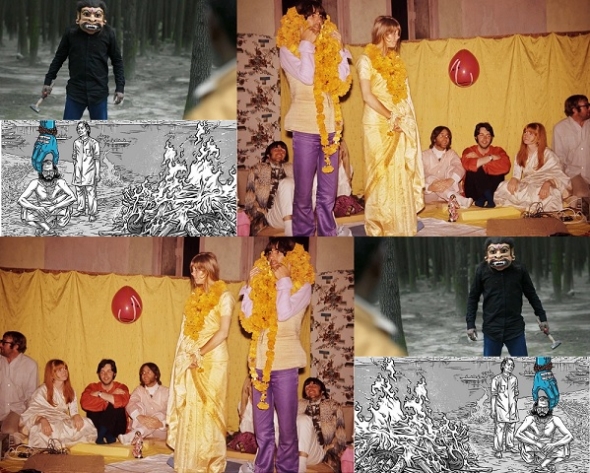 IF YOU are fascinated by counter-culture, spirituality and the cultural impact of Indian ideas and philosophy, you shouldn’t let the closing gala film of the UK Asian Film Festival pass you by, on Sunday (June 6).

Bringing the curtain down on this year’s mixed digital and physical offerings at this year’s UK Asian Film Festival (UKAFF), is the documentary, ‘The Beatles and India’ which will have its world premiere at the BFI Southbank in London.

Directed by Ajay Bose and Peter Compton, it covers the time when the world’s most famous pop group arrived in India to meet spiritual figures and spend time in Rishikesh – a popular tourist town, high in Himalayas, that still attracts those looking for spirituality and enlightenment.

In 1968, Paul McCartney, John Lennon, George Harrison and Ringo Starr travelled to take part in a transcendental meditation course run by the Maharishi Mahesh Yogi – who ran his own ashram in Rishikesh at that time.

They had come across the Indian mystic in Britain earlier and were fascinated by his teachings which were against consumerism and materialism. Harrison was hugely influenced by Indian culture and became close to the Hare Krishna movement and was later a major benefactor to Bhaktivendata Manor, a temple complex, run by Hare Krisha devotees, close to Watford in Hertfordshire.

Bose’s film looks at the cultural exchange between The Beatles and Indians during that encounter – and examines closely at what Indians made of The Beatles at the time too. It also charts the filmmaker’s own love affair with the pop group.

In a similar vein – is another documentary which screens physcially at UKAFF on Saturday (June 5). Looking at perhaps the most famous Beat of them all in India is – ‘Ginsberg’s Karma’.

This short documentary is a great starting point for anyone interested in Beat poet Allen Ginsberg and what he got up to in India in the 1960s. When he returned to his native US, he became one of its most influential and celebrated poets of the time and is credited with having a hand in creating a counter-culture there.

Pitched at those who know very little and nothing at all really, the 25 minute or so documentary has interviews with those who knew him at the time – including Indian poets whom he met and with whom he shared ideas.

There are some funny anecdotes and Beats in India author Deborah Baker also lends her expertise. Her book, ‘A Blue Hand’ is a brilliant chronicle of what Ginsberg and others got up to in India.

This year’s festival is centred around theme of ‘A Ray of Hope’ and recognises and celebrates films that reflect an affinity and the preoccupations of the late, great humanist Indian director Satyajit Ray.

A mix of short commissioned films from India, Pakistan, UK and Nepal – it’s a brilliant window onto future filmmaking talent.

Among those screening their work is director Shai Hussain, whose ‘The Waving Man’ with Bhasker Patel (of ITV ‘Emmerdale’ fame) stars.

Multi-hypenate Hussain who is well-known as DJ Shai Guy and has mixed over 30 tracks for the BBC Asian Network, told acv: “‘The Waving Man’ is about how easy it is to hate what we don’t know but how that can change with familiarity, so even in these dark times, there’s a ray of hope.”

Also screening is Sue Carpenter, Belmaya Nepali and Simi Carpenter’s ‘Stronger’. Belmaya and Sue Carpenter presented their feature documentary ‘I am Belmaya‘ in the festival and the film is still available online (see below).

There are also other physical screenings including, ‘Bulbule’ tomorrow (June 4). It looks at increasing divisions within Indian society through two friends from minority communities who meet and shoot the breeze after a gap of five years. Harmeet and Irfan talk about what’s been happening in India since they last communicated. (See below for details of where and when it screens).

Also available to view in the cinema in London tomorrow (June 4) is ‘The other side of the river’ – a Gujarati language film that examines aspiration, ambition and limitations through the eyes of four young children who wonder what is on the other side of an enormous lake.

Sri Lankan feature, ‘The Wandering Life’ screens on Saturday (June 5) and takes the viewer on a journey through the eyes of a young man whose life is turned understandably upside down when his sister is murdered – by a policeman.

Elsewhere, the festival continues to offer films through its digital media partner, Modern Films.
Among theose available on the last day is ‘Nirvana Inn’, which has also had a physical screening at the festival earlier.

Nirvana was, and remains, a popular concept and was part of the language of emerging cultural exchange between East and West in the late 1960s and beyond.

A Buddhist concept of bliss, it stirs the imagination and conjures up a lot of abstract and esoteric ideas.

Writer-director Vijay Jayapal talked to www.asianculturevulture.com’s Sailesh Ram and Natalie Barrass about some of the ideas behind his film (see the video below).

Helmed by the enigmatic on screen presence of Adil Hussain, a popular actor in India, it is a psychologically rich tale which opens up a lot of issues about mental health, suicide, death and what exactly constitutes bliss, happiness and fulfilment.

Hussain ostensibly arrives at a hillside resort, also in the Himalayas, (in Manali in Himachal Pradesh to be precise) to take up employment as a general manager to a small resort, housing some cottages and rooms. He appears to get on well with the owner, and other staff, is responsible and seems well settled professionally.

However, on a personal level, there are bigger struggles.

In the film, he has a series of encounters with the guests – and there are some strong hints of a troubled past in Assam and his life as a ferryman steering a boat.

Jayapal puts the idea that he was suicidal and intentionally capsized a boat with a group of tourists up front and centre.

But are his encounters then with real guests or ghosts or has he come to visit them from his Nirvana?

The film is subtle and involving and has no obvious or correct answers, as Jayapal himself outlined in our discussion.

What is intriguing is how different will the director’s cut of the film look and feel?

The version screening at UKAFF is shorter than an original cut. ‘Nirvana Inn’ had its world premiere at the Busan International Film Festival in 2019.

Jayapal’s film is well worth viewing and his next work, a multi-lingual Indian crime drama sounds interesting too – we, for one, will be looking out for it.

Privacy & Cookies: This site uses cookies. By continuing to use this website, you agree to their use.
To find out more, including how to control cookies, see here: Cookie Policy
← Asian women smashing it – Deepika Padukone, Lilly Singh, Priyanka Chopra and author Preti Taneja
ACV announces special reception for transgender film, ‘Ek Aasha’ at UK Asian Film Festival on March 29 Book Now! →