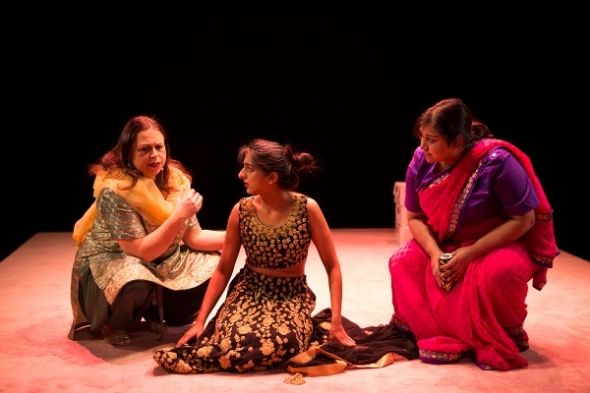 GURPREET KAUR BHATTI is one of Britain’s most brilliant playwrights and is an acute chronicler of the family – especially the Asian (Punjabi) family.

Her writing is layered and multi-dimensional and never succumbs to easy stereotypes – her latest play at the Birmingham Rep, Elephant does not disappoint.

It tells the story of an ‘ordinary’ aspiring Asian family living in a suburb and is ‘a play based on true events’. Deesh has invited her estranged sister, Vira to her daughter Amy’s going away party who is ostensibly going to do an internship with a website in New York – but she is really getting away from the family.

Deesh (Yasmin Wilde) anxious and agitated – she pumps up the mattress in the spare room, fluffs up the pillows and asks her children to behave. She hasn’t seen her sister for years and the reasons will soon become apparent, so she wants everything to go well.

Vira (Sukh Ojla) is slovenly and direct – she likes her cider and fags. Crude but witty, she was nicknamed ‘elephant’ for her size, but there is certainly an elephant in the room and nobody is going there for the moment.

There is a lot of banter as nephew, Bill (Farshid Rokey) and niece, Amy (Raagni Sharma) get reacquainted with their aunt, but the big question is why has it taken so long for Vira to come and visit.

Bhatti writes with an authenticity and understanding of the Punjabi family. For example, when their father, Barry (Ezra Faroque Khan), takes a swig from a can of beer, he is soon reminded by his wife, Deesh, that as he is spending the night at the gurdwara, he shouldn’t be drinking.

The couple have worked hard to provide for their family, ensuring the kids get a good education and Amy gets a flash send-off complete with heart shaped bunting, cava, chocolate fountain and an ice sculpture.

Barry dotes on his ‘little princess’ and bosses his sensitive son whom he calls ‘boy’, and you can sense the underlying tension in the way he treats Deesh.

This 90-minute play directed by Lucy Morrison is performed on a bare square shaped set designed by Camilla Clarke; it simmers along with Bhatti’s trademark dry humour and directness, until the family’s secrets come tumbling out.

www.asianculturevulture.com doesn’t want do a spoiler but suffice to say it will make you pause.
What happens next is even more shocking as the family is split apart and lines are drawn.

It happens – we all know, but Bhatti gets underneath the specifics and goes to something almost visceral and raw.

As the publicity material puts it: “This is family. Real flesh and blood, not out of a catalogue or an Oxo advert”.

Since the review was written – Gurpreet Kaur Bhatti has written about the subject of childhood sexual absue and the culture of silence that surrounds it. See…
https://inews.co.uk/opinion/fury-denial-blame-drama-can-ask-tough-questions-abuse-survivors-treated/