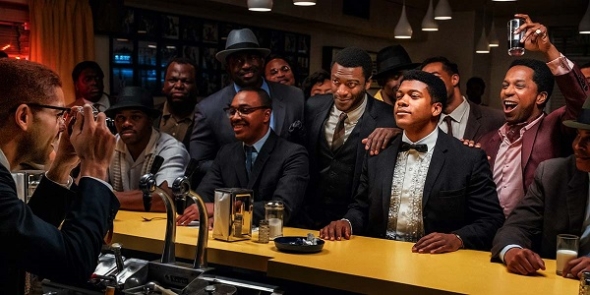 To those outside the US – he was an American football player who attained iconic status for the Cleveland Browns –and later become an actor and is the only one of the four still alive today (he is 84).

The world already knows the other three: Ali (played by Eli Goree), the boxer and global icon who touched millions, 1942-2016; Cooke (Leslie Odom Jr), the soul crooner, sometimes referred to as ‘The King of Soul’, 1931-1964; and Malcom X (Kingsley Ben-Adir), the Muslim preacher and brilliant street philosopher, also shot dead (as was Cooke), 1925-1965.

This is the directorial debut by Oscar and Emmy winner Regina King and it is a treat – aided by terrific performances, it has a richness and texture that begs multiple viewings – the four actors are magnificent and totally in their element and you find yourself feeling sad when the end credits roll – because you want to see more!

King packs a lot in – and adapted from a play by Kemp Powers, who also wrote the screenplay, this film has an incredible urgency and power in the wake of Black Lives Matter.

The action takes place over one night in Miami, yes that much is obvious, but the timing is significant – it gets going when Ali – still Cassius Clay – defeats Sonny Liston to become heavyweight champion of the world.

Clay/Ali is just 22 and has just arrived as a national figure.

Brown is transitioning from football to acting; Cooke is well-established, rich and now beginning to have an international impact – he has just given the Rolling Stones a No.1 hit with a track he produced; Malcolm X is on the cusp of leaving the Nation of Islam and going his own way – which he did. Two of the men in this film would be dead within the next calendar year after their meeting – and photographed for posterity in February 1964. (The lead image is a re-creation of the actual photograph).

The four men are at a significant crossroads in their lives – each has a way of dealing with the inequities and humiliation racism has visited upon them – and the film beautifully explores dilemmas that remain strong today for anyone who is successful, materially comfortable, but can see that the lot of their community is, generally, not a fair one.

Goree plays Ali/Clay with the swagger and poise of a man who knows his destiny, if not his precise place in it – he is youth, energy, optimism and hope and it is Islam that gives him the wings to fly.

In this move, from an undefined religion or soft Christianity, he is of course, aided by Malcolm X.

But Ben-Adir plays the Malcolm X rarely seen in public – or even in the footage we have of him today.

This is Brother Malcolm as funny, relaxed and… uncertain. He isn’t sure whether he can stand on his own two feet (especially financially) and what the consequences will bring…

Odom Jr brings the classiness of Cooke, his supreme confidence and poise to the screen – but is it enough at a time when black people are being killed on the streets – does his economic success insulate him from the misery of millions of fellow black Americans…?

Aldis Hodge, as Brown, is hugely admired by football fans, but his skill and brilliance as a man on the pitch can only take him so far – especially in the eyes of those who still see the colour of his skin as his defining quality.

Up front in the opening scenes, King establishes these characters to us as men – successful, high-achieving, glorious in all facets, but racism is a nasty virus – that harms us all.

This film may not be to everyone’s tastes, it is dialogue-heavy and appeals to the head more than the heart, possibly, but to be in this company of supremely gifted actors is a truly a joy and goes some way in marking out the complex interplay between success, activism – and seeking social justice for all.