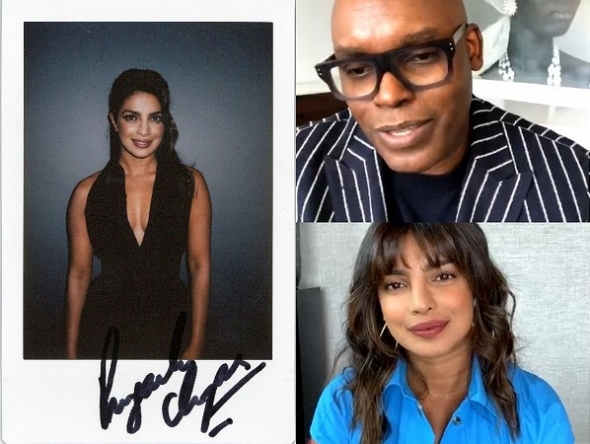 PRIYANKA CHOPRA JONAS said she has managed to finish her memoir during lockdown, is busy producing her own content, is looking forward to working on set and completing her role in ‘Matrix 4’.

Talking from her Los Angeles home, she declined to go into any detail about her part in the latest instalment of the hugely successful Matrix franchise – or the film itself – in an Instagram Live conversation on Friday (September 11) with Cameron Bailey, the artistic director of the Toronto International Film Festival (TIFF, September 10-19).

She told Cameron that she is looking forward to working with Lana Wachowski (aka The Wachowski Brothers) but ended any further interrogation from Bailey, joking: “Can you imagine the gag order on that one?”

It wasn’t clear how far she was into filming or whether she had already started working on this film, but she said she had been back on set after staying put in LA for these last few months.

She said her mother, Madhu, a medically trained doctor, was with her there and that her husband, pop star Nick (as a Type-1 diabetic) and she (as an asthmatic) had been very careful and self -isolating mostly since the lockdown.

She also talked about her excitement in being involved in ‘White Tiger’ the Man Booker Prize-winning novel by Arvind Adiga, which has been turned into a film by US director Ramin Bahrani (‘99 Homes’) and novelist Adiga himself. Ava DuVernay (‘Selma’) and Chopra Jonas appear to be supporting the project as producers.

She said her part in this film was not large, but she desperately wanted to contribute and had first connected with the book when it was released in 2008.

It charts the rise of a man who starts off on the bottom rung of Indian society, but makes his way to the very top accruing money and power along the way. Indian Indie fave Rajkummar Rao stars. It is in post-production currently and is with Amazon Studios.

She told viewers ranging more than 10,000 during the live broadcast that she has finished what sounded like the first draft to her memoir, which is titled, ‘Unfinished’. She has a deal with Random House and first talked about the book in 2018. She said she missed the festival massively – she was in Toronto last year for the world premiere of ‘The Sky is Pink’ – acv was there to cover it. See 👇

She has been a producer for a while – along with her mother and brother, they set up Purple Pebble Pictures, it focused initially on Indian language material and she has presented one of her films at TIFF before.

‘Pahuna: The Little Visitors’ enjoyed its world premiere there in 2017 with Chopra in attendance.

She told viewers that she had gotten fed up going to the US for her music projects (she had released a couple of pop tracks previously) and having to introduce herself at parties and sometimes chasing productions she wanted to be involved with, as an actor.

She said that she took inspiration from other women and decided she would produce content that appealed to her.

She has widened the scope of her work as a producer and is understood to have created an American arm of Purple Pebble and has a first look deal with Amazon which covers any territory.

She is already making ‘Sangeet’ with her husband pop star Nick and is primed to appear in spy series, ‘Citadel’, alongside ‘Bodyguard’ pin-up Richard Madden.

She also will produce and star in a film about Ma Anand Sheela, the assistant to controversial godman Bhagwan Rajneesh, who took up refuge in a remote Oregon town in 1970s, after fleeing India. An ashram of his still exists in Pune.

She told Bailey that she was missing the festival massively and had once come to TIFF for just four hours from the US.

Chopra Jonas is an ambassador for the festival, and is part of the Share Her Journey initiative which highlights women filmmakers who participate in the festival.

For the 26-minute conversation –