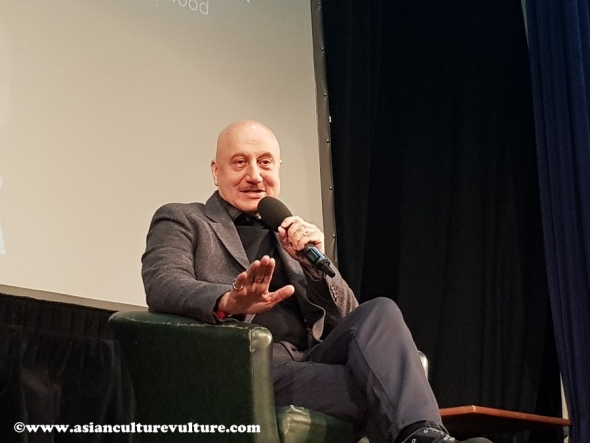 ♦There should not be censorship but questioned ‘implementation

♦He was 28 in his first substantial role and played someone in his 60s, and was initially told he couldn’t be actor…

♦Has featured in over 500 films and been in films in most Indian languages, except Gujarati

♦People should follow their own path, carve out their own career and not expect a helping hand…

♦Offered one student one free month at Actor Prepares, his acting school in Mumbai

ANUPAM KHER revealed his incredible struggle to become an actor in what was his first ever major public talk in the UK.

He also touched on the censorship controversy after the recent brouhaha regarding the film – ‘Padmaavat’ in India – without actually naming the film.

One of the most recognisable faces in the entertainment industry in India, he is also prominent in the West, having starred in ‘Bend It Like Beckham’, ‘Silver Linings Playbook’ (2012), and more recently ‘The Big Sick’ and the BBC TV drama, ‘The Boy with the Top Knot’, screened in November in the UK.

He has appeared in more than 500 films and is the current chairperson of India’s Film and Television Institute, and a former head of the Central Board of Film Certification.

Invited to make the keynote address at the end of the annual London School of Economics’ Student Union India Society Forum Day, he told them: “There should not be any censorship but there is an issue with implementation.”

He appeared to suggest that in small towns where there are cinemas, there was a threat to public safety with regards to controversial films and protests, and those concerns could not be dismissed lightly. He talked about his experience of giving the green light to independent filmmaker Anurag Kashyap for his controversial film ‘Black Friday’ (2007), about the Mumbai bombings of 1993.

Kher is widely seen as a supporter of the ruling BJP – his wife Kirron represents Chandigarh and he spoke about his nationalism to students. Often criticised for it, he said simply that it was ok to wear one’s heart on one’s sleeve. “It is the way we were brought up,” he declared.

But it was on the subject of his life and career that he was more expansive, revealing and affecting.

He has made the journey from small town India to the heart of Hollywood.

“I never thought I would shake Robert De Niro’s hand, let alone be in a film with him (‘Silver Linings Playbook’),” he revealed.

He said sometimes he would just comfort himself by looking at a text message De Niro had sent, just casually asking him about how he was doing.

His last Hollywood outing was in ‘The Big Sick’ (though strictly in production terms, an independent film), alongside US stars, Ray Romano (of the much loved TV series, ‘Everybody Loves Raymond’) and Holly Hunter.

In a response to a question from a US Indian student, he explained how he had come to be cast.

“I have a distant cousin who was an ex-agent of Kumail Nanjiani (the writer and lead in ‘The Big Sick’).”

He expected Nanjiani to call him but ended up contacting Nanjiani himself.

“He kept putting the phone down on me,” Kher lamented.

“It is my father’s wish that you play him,” said Nanjiani, whose film is based on his own life and romance with Emily Gordon, now his wife – and features both his mother and dad in the film too.

Kher told Nanjiani: “If it’s your father’s wish, then I will play him without reading the script.”

He wished Nanjiani and co-writer Gordon, Good Luck today (March 4) at the Oscars, the pair have been nominated for best original screenplay.

Kher grew up in Shimla, a town on the foothills of Himalayas and home of the British Raj in the summer.

“My father was just a clerk in the forestry department,” he reminisced.

He said watching films in his home town (where there were four cinemas at the time) made him feel alive and lured him into the life of an actor.

But when he arrived in Mumbai, he had nothing after being a gold medal student at the National School of Drama in Delhi.

“For 27 nights, I slept on railway platforms,” he said.

For around three years, he did small roles to survive and later as worked picked up, he a made vow.

“There were tough times. I just wanted to keep working. It was more about quantity than quality,” he confessed. “In the last five years, I have slowed down.”

Most of all the message he wanted to communicate was: “Don’t follow the crowd, create your own path, take risks and do something.”

It had served him well and he saw no reason why students of the LSE should do any different.

One student asked him what help could be provided to get more people like himself (without family connections into the industry).

He said it wasn’t the system that was at fault and said students needed to look at themselves.

“Why do you demand the world be kind?” He posed, then offered the questioner a month-long acting course at his acting school free of charge.

He started his talk by raising objections to the term ‘Bollywood’ arguing it put Indian cinema down.

He also said it was not easy for him to speak in English – he always thought in Hindi and had to translate – several times, he uttered the odd quip and comeback in Hindi. He explained that at the initial table reading for ‘Bend it Like Beckham’ – his first foray in the West – he was almost overawed because for everyone else, English was their first language.

Last month, he was in Los Angeles and has signed up to play a doctor in a new medical drama series called ‘Bellevue’ (the name of the hospital).

In an entertaining and engaging session that went on for over an hour, he also fielded questions from the floor, and in the middle of his speech sometimes engaged with members of the audience, asking their name and what they did and so forth. www.asianculturevulture.com was just one of his victims!

Look back at Live Tweets here

Privacy & Cookies: This site uses cookies. By continuing to use this website, you agree to their use.
To find out more, including how to control cookies, see here: Cookie Policy
← ‘The Good Karma Hospital’ Episode 6 (review): The long awaited wedding, a car crash and some new (and old) relationships blossoming
‘Gangubai Kathiawadi’ – Beautiful all round and a reason to go back to the cinema (if you haven’t been)! Review →