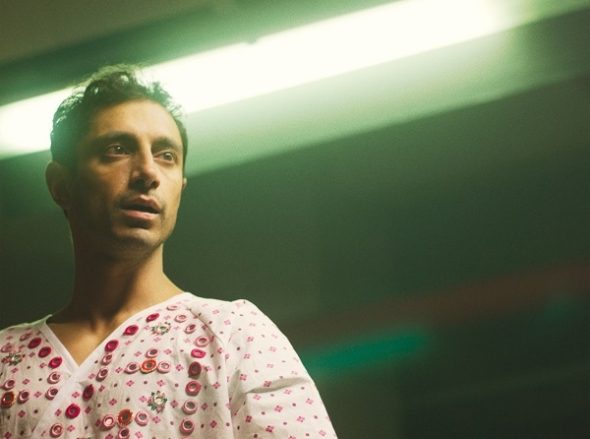 There are also two features from South Asia – one from India and another from Bangladesh and a new film which has a music score by an increasingly high profile British Asian female music composer.

And Turner Prize and Oscar-winning British black director Steve McQueen’s film, ‘Mangrove’ opens the London Film Festival on October 7. It is part of a series of five films McQueen has made for the BBC as part of a series called ‘Small Axe’.

The full programme was announced on Tuesday (September 8) at a virtual launch.

Riz Ahmed is the star of ‘Mogul Mowgli’ which will get its UK premiere on Saturday, October 10. The film charts the sudden change in course for a blossoming rapper, played by Ahmed himself – who on the verge of a world tour and a massive career breakthrough, falls ill and has to return to his parental home. Taking in dream, memory and hallucinations, the film deals with Partition, Qawwali music and the spectre of competition from another rapper on the scene called RPG.

Directed by American Bassam Tariq, the film has an all-star Asian cast and enjoyed its world premiere in Berlin earlier this year. “Both a paean to the importance of cultural heritage and a sharply observed reflection on muscle memory, the richness of Tariq’s achievement lies in the details of this heady mosaic,” writes BFI programmer Elhum Shakerifar.

Aleem Khan is the director of ‘After Love’ – a tender tale of life after bereavement for Mary Hussain (Joanna Scanlan), who finds something of her late husband’s belongings which lead her to Calais. It was selected to feature at the Cannes Film Festival Critics’ Weeks strand earlier this year before the pandemic struck and this year’s Cannes was cancelled.

Tricia Tuttle, BFI London Film Festival director, said of ‘After Love’: “A remarkable debut whose delicate tenderness is a testament to the quality of its writing and performances, by its close you will feel you truly know these people.” It will screen and be available to see in the cinema from October 15.

British composer Nainita Desai, recently nominated for an Ivor Novello award for her work on the Bafta-winning documentary, ‘For Sama’, has composed the music for ‘The Reason I Jump’ – screening in the UK for the first time now during the fest. It is a film that explores the interior world of an autistic boy and is based on a famous memoir by non-speaking autistic Japanese boy, Naoki Higashida. It is a highly immersive and imaginative work with a keen focus on our perceptions and senses.

Directed by Brit Jerry Rothwell it premiered at the Sundance Film Festival inthe US earlier this year and won the Audience Award there. It is listed as available to view online from October 9.

From Bangladesh is ‘The Salt in our Waters’ by debutant feature filmmaker, Rezwan Sumit, a graduate of a Spike Lee fellowship.

Artist ‘Rudro’ relocates to a remote coastal island at threat from climate change. He strikes up a friendship with a fellow female artist, but traditions mean any sort of relationship is taboo and when the fish dry up and a cyclone approaches – the locals became yet more suspicious of Rudro and his art. You will be able to watch ‘The Salt in our Waters’ online from Tuesday, October 13.

Also screening at LFF is up and coming Indian director Chaitanya Tamhane’s ‘The Disciple’.

About a young Indian classical musician trying to navigate his way through life in a big city – Mumbai and keep his guru/teacher happy and onside proves ever challenging. The film enjoyed its world premiere in Venice just a few days ago and is also at the Toronto International Film Festival.

Tamhane was in Venice and we caught up with him – look out for interview coming shortly to www.asianculturevulture.com.

If you read our Venice preview, you will know that the film’s executive producer is Oscar winner Alfonso Cuarón.

This year’s London Film Festival (LFF) is described as the most accessible yet – there will be many online screenings as well cinema viewings up and down the country in different partner cinemas, as well as at the BFI Southbank.

Among the eagerly anticipated other major features are Spike Lee’s ‘David Byrne’s American Utopia’ – a deeply immersive journey into one of America’s most enigmatic and questioning pop and Broadway acts; Oscar-winner Frances McDormand’s ‘Nomadland’ which features her as a widow travelling across the western US in a camper van and eking out a life on her own terms – and directed by Chloé Zhao.

The festival closes with British director Francis Lee’s ‘Ammonite’ with Kate Winslet in the lead part as 19th century palaeontologist Mary Anning, who falls rather unexpectedly for a younger woman played by Sairose Ronan and set in Lyme Regis, Dorset.

As usual at LFF, the films are split into distinct strands – Laugh, Dare, Journey, Create, Love, Cult. Debate, Family, Treasures and there are also two other themed strands – Expanded, which showcases XR and Immersive work and Experimenta.

This year, there are a wider range of shorts – many international.

Among the home-grown shorts are ‘Jambo Cinema’ by Dawinder Bansal which explores the world of 1980s Wolverhampton, Bollywood video cassettes and the culture that emanated from them among the Asian community. It screens as part of This is the Rhythm of My Life strand of shorts.

‘Bittu’ directed by Karishma Dube and is an India-US production that appears in the Kids Will be Kids section of shorts.

Shorts will be available online the from the beginning of the fest till the end of the fest.

The full programme was revealed by British Film Institute CEO Ben Roberts and Tuttle in a 30-minute pre-recorded broadcast.

The Salt on our Waters
https://www.bfi.org.uk/london-film-festival/screenings/salt-our-waters-nonajoler-kabbo

The Reason I jump
https://www.bfi.org.uk/london-film-festival/screenings/reason-i-jump

Tickets
Go on sale to the general public from Monday, September 21
https://www.bfi.org.uk/london-film-festival/tickets

Privacy & Cookies: This site uses cookies. By continuing to use this website, you agree to their use.
To find out more, including how to control cookies, see here: Cookie Policy
← Antonio Aakeel and Abid Khan on what inspired them to make ‘Granada Nights’
UK Asian Film Festival 2021: ‘Raahgir’ (‘The Wayfarers’) opening gala film sets tone for fest dedicated to Satyajit Ray legacy… →