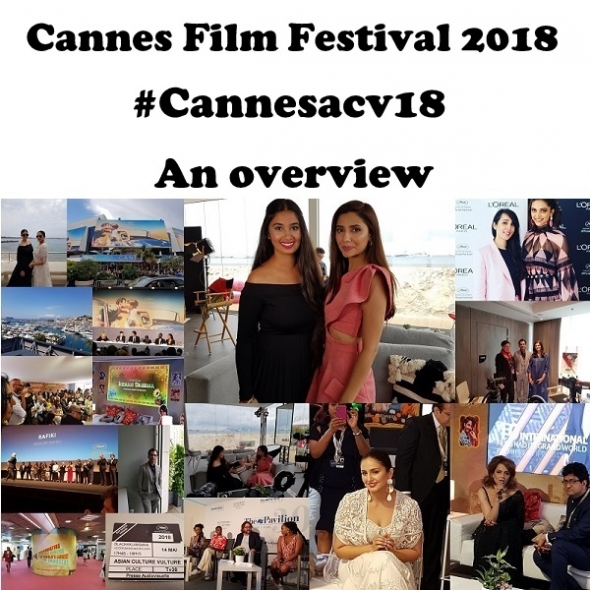 Followed us in real time or just want an overview? This is your ultimate #Cannesacv18 guide…

WHILE arguments continue to rage over Italian actor Asia Argento’s powerful denunciation of shamed movie producer Harvey Weinstein during the closing ceremony of the Cannes Film Festival 2018, we think it’s fair to say there’s much work still to be done.

Selecting just three women filmmakers from the 21 finally selected for competition was not the most brilliant of starts.

The main competition jury had a commendable jury president in Cate Blanchett and has, as is customary, a 50/50 male-female split. It had a decent diversity component too with Chang Chen from China, US black filmmaker Ava DuVernay, Khadja Nin, a Burundian songwriter and composer, Andrey Zvyagintsev, a Russian director, Denis Villneneuve, a Canadian writer and director and starlets Kristen Stewart and Léa Seydoux.

On Saturday (May 12), Blanchett and others made a visible stand for female equality, gathering 82 women filmmakers on that famous Red Carpet to make a serious and powerful point. Among the big names supporting the protest were jury members, DuVernay, Stewart, and Jane Fonda and Salma Hayek, and from India Rasika Dugal from ‘Manto’ and Rohena Gera whose ‘Sir’ featured in the critics’ section of the fest, are understood to have participated.

Only 82 women filmmakers out of some 1,600 plus men have ever had their films screened as part of the official Cannes selection – and been able to walk that carpet as directors of films.

That is quite shocking, though not altogether surprising. Yet more troubling is that only one has ever won the top prize at Cannes – the Palme d’Or – Jane Campion in 1993. Legendary filmmaker filmmaker Agnes Varda, who was at the protest and one of those to speak, received an honorary Palme, in 2015.

This year, there was a lot of noise for Nadine Labaki, a filmmaker from Lebanon, whom we have noted since she came to the London Film Festival in 2007. Her film, ‘Caphernaum’, took the jury prize – a sort of third spot in the awards hierarchy.

Spike Lee’s ‘BlacKkKlansman’ took the unofficial runners-up spot, winning the Grand Prix. It’s a hugely entertaining and powerful piece and our coverage of the red carpet world premiere – see here and the subsequent press conference, in which Lee roundly coruscated President Donald Trump without naming him – using the street expletive ‘MF’ several times over in his opening salvo, was one of the acv highlights.

Elsewhere, filming the first-one-to one-interview conducted with rising global star Mahira Khan, at her first ever Cannes as a LÓreal Paris amabassador, was also especially thrilling. She walked the Red Carpet the next day for the world premiere of ‘BlacKkKlansman’ and we were there to capture it all.

ACV special presenter Shay Grewal’s (of BBC’s Sunny & Shay) interview is also a terrific piece – if we say so ourselves. It was Shay’s second interview (after Huma Qureshi and also available on Youtube) for us – and we certainly hope it won’t be the last…

Khan is talented and articulate, and deserves to go higher and further – we really think, Cannes and L’ Óreal Paris and LÓreal Pakistan, have all helped to put her on a global map. She has a platform – can she now do what Priyanka Chopra has done? We think so…and her US college education should help.

Our Deepika Padukone interview is a shorter and less personal in tone. Attika Choudhary, who has done many of our Cannes Film Festival L’Óreal Paris interviews previously, covers the controversy over ‘Padmavaat’, and the future, as well as Padukone’s return to Cannes, following her L’Óreal Paris debut last year.

Manoj Bajpayee speaks to us about his new film ‘Bhonsle’

This year it was not possible to interview Aishwarya Rai or Sonam Kapoor – just sometimes the way the cookie crumbles on our side of the fence as the PRs wheel, deal and shuffle their pack.

In the India pavilion (most significant filmmaking countries have one), we met Huma Qureshi, who came to officially inaugurate it. She later did an interview with Shay Grewal and Qureshi is one of those who landed up with ‘Gangs of Wasseypur’ (2012) on its premiere, announcing the arrival of Anurag Kashyap and both have had prominent careers since…the power of Cannes…

The following day, rising star and Miss controversy herself Kangana Ranaut made an appearance.
Another Grey Goose ambassador (as was Huma Qureshi), she spoke for a few minutes, used an English expletive and then promptly left – her Audrey Hepburn look somewhat unruffled by the kerfuffle her cancellation of all impending interviews caused that afternoon. Sigh. Maybe next time or next year?

South Indian film star Dhanush tells us about his first international production, the French-Indian ‘The Extradordinary story of the Fakir’

We have a video interview with Tikoo covering the Padmavaat and IFFI controversies and the general climate for filmmakers, which critics claim has got worse since the BJP came into power in 2015. She powerfully rebuts these accusations in our interview.

On the official part of the festival, there are video interviews with team Manto; director Nandita Das, who spoke to us back in 2015, about her dream of her making a film on the celebrated Urdu Partition writer, Saadat Hasan Manto has come full circle.

It enjoyed its world premiere at the Un Certain Regard section – we have an interview, both with Das and Indian acting icon, Nawazuddin Siddiqui. At the time of the premiere, we filed a news story and a video of the film’s reception.

We also have print interviews in regards to the other Indian film which had its world premiere in the Critics’ Week (more formally known as La Semaine de la Critique). ACV’s Suman Bhuchar was impressed by ‘Sir’ and director Rohena Gera and the acting talent at the fest.

Marc Baschet – Oscar award-winning producer of ‘No Mans Land’ and co-producer of the most successful Indian film of recent times, ‘The Lunchbox’, talks about his involvement in ‘Lihaff’ which controversially explores the life and work of Urdu Muslim feminist Ismat Chugtai – whose ‘lesbian’ inspired tale, ‘The Quilt’ has been turned into a film by director-writer, Rahat Kazmi, whose ‘Side A and Side B’, featured recently at the UK Asian Film Festival. We also have interviews with Kazmi and co-star Namita Lall who plays alongside Tannishtha Chatterjee, a well-known face for such films as ‘Brick Lane’ and who reprises the central role of Ismat, who was a contemporary of Manto’s.

Baby Tyra, just seven-months-old created history by becoming the youngest official delegate at the festival with her own entry badge as Cannes makes an effort to accommodate working mums such as Shay Grewal

We also have news on Manoj Bajpayee’s ‘Bhonsle’ – one of India’s top character actors is also a producer on this movie, which is directed and created by Devashish Makhija, whose ‘Ajji’ (‘Granny’) so memorably opened the UK Asian Film Festival in March. Makhija is definitely a director to watch and with Bajpayee’s acting pedigree, expect us to be covering ‘Bhonsle’ as it hits the international festival trail later this year.

Dhanush – for followers and fans of South India films, this icon of Tamil cinema talks to French Indian film journalist Brigitte Leloire Kerackian about his first international production. ‘The Extraordinary journey of the Fakir’ is a French/Tamil film and aimed at the (Sri Lankan/Indian) Tamil diaspora in France. He is a big star in cinema coming out of Chennai and this is a French Indian co-production.

Kireet Khurana talks about his film ‘T for Taj Mahal’ which is set to enjoy a screening at the London Indian Film Festival next month. We will have a closer look at what’s on at LIFF this year and we also chatted to Cary Rajinder Sawhney, the director of LIFF – you will be able to watch a video of him picking a few LIFF highlights for acv viewers and readers.

Just another day at work… for Cannes delegates…

Also on video are interviews with celebrated Guardian film critic, Derek Malcolm and actor Prashant Kapoor (#MonsieurCannes), who managed to get himself papped with stars such as Deepika Padukone and Aishwarya Rai – see the story and the longer video all about how to get into the best parties in Cannes… 😉

Au revoir Cannes, till 2019, then! See you all again… signing off… thanks for your company this last two weeks or so it’s been brill – as is the way the Bollywood interviews get a lot of the social media attention…normal service later this week…😊

Privacy & Cookies: This site uses cookies. By continuing to use this website, you agree to their use.
To find out more, including how to control cookies, see here: Cookie Policy
← Jaipur Literature Festival (#ZeeJLF) 2018 Day 3: Shashi Tharoor on restating liberal Hinduism, and Helen Fielding and Amy Tan talk success…
Jaipur Literature Festival 2018 (#ZeeJLF) – Showtime: Rupi Kaur wins hearts and minds… →