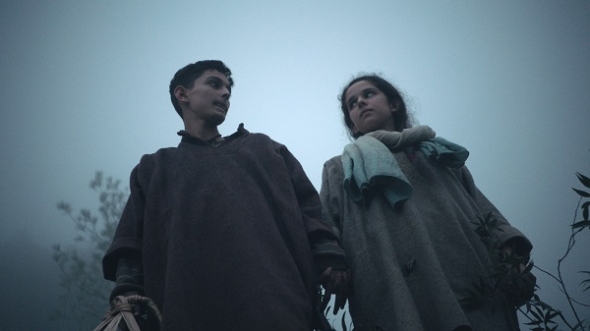 IT’S BEST to treat ‘No Fathers in Kashmir’ on its own terms as a story and a tale about two young people who fall in love against the back-drop of a beautiful, but troubled region.

Interestingly, in the film, the character, ‘Noor’ (Zara Webb), is from Birmingham and travels to Jammu & Kashmir with her newly partnered mother, to spend time with her paternal grandparents on a summer break.

Her father has been ‘missing’ for many years, and is presumed deceased.

While on holiday, Noor falls in love with ‘Majid’ (Shivam Raina) a local boy, and their relationship opens out to a wider family story and tragedy.

It’s a tender coupling and on its own level works and holds the film together with two strong performances from the young leads.

There were open castings in the North of England and there was a similar process in India and the movie is also partly crowd-funded.

Webb is British and her family are understood to have roots in the region, while Raina is from a Kashmiri Pandit (Hindu Brahmin) family settled in Jammu.

Well-known Indian actor Soni Razdan (last seen here on the London stage in ‘When the crows visit’ late last year) is among the supporting cast.

Director Ashvin Kumar, much admired for being the youngest Indian director to have ever been shortlisted for an Oscar, for his short film, ‘Little Terrorist’ (2005) made ‘No Fathers in Kashmir’ with a view to telling the world what he believes is happening there and chronicle the suffering of fellow Indians.

For him, it is both deeply personal and patriotic.

He has made two previous documentaries about the region, ‘Inshallah Kashmir’, and ‘Inshallah Football’ – which played across the international festival circuit.

“I suppose it is do with the fact that I grew up visiting Kashmir as a child, my grandfather is from there and we used to go there every year,” he told www.asianculturevulture.com. “I was robbed of that pull, when the troubles began.”

For some 20 years, he stayed away.

“I went back in 2009 and to my shock discovered that there was so much more going on there than was being presented in the mainstream media.”

In his film, he is attempting to re-draw the balance (somewhat) and open the eyes of both the world and other Indians to the situation as he sees it.

“I think I am being deeply patriotic by pointing out the issues that my country faces and the serious problems it has.

“It’s not in our best interests to keep the large majority of the population ignorant.”

The film got a release in India in the Spring of last year, following a long legal fight with India’s censors – but perhaps a little predictably, it didn’t run he as expected it to, and a broadcast and digital deal also fell by the wayside, he lamented.

It had also been scheduled to open the UK Asian Film Festival here in March 2019, but a decision was taken to pull it.

He told acv he was concerned about fringe elements here exploiting sensitivities and detracting from the film and rational debate.

“There were people reacting without watching it and looking to see offence,” he explained.

The film more recently screened at the Kerala International Film Festival (described by Kumar as “India’s best”) and the India Habitat Centre Film Festival in Delhi.

“About six and half thousand people in total have seen the film now in India and we had to put on extra screenings in Kerala.”

Kumar faced huge difficulties making the film – five years in assembling, he said he was fortunate in being able to shoot in and around Srinagar, the capital of the state and then later in Jammu. He also had to re-edit the film when festival programmers rejected it.

“It was the worst (thing) that happened, the unkindest blow, and we thought, what are we not getting, is it the pacing? We wasted a whole year.”

To have got his film to release at all is something of an achievement.

“What kept me going was the standard of the performances – they were so, so good.”

He wants the film to connect with British Kashmiris, believing that his film gives voice to people on both sides. The film depicts divided families.

“I think it’s the first time a film has been made tipping one’s hat to the Mirpuri community, so it’s not just about the Valley (in India) but all Kashmiris.”

Behind Kumar is a very sincere and heartfelt plea for people to watch and talk about the issues that currently divide the region.

In taking that step, Kumar has been brave and bold and believes that there is hope with young India.

“My whole gambit has been to engage with the youth, inform them into becoming compassionate, and conscious about what their fellow citizens are going through in Kashmir.”

Kumar himself actually plays the most complex character in the film – ‘Arshad’ (a friend of Noor’s dead father), who is not what he seems and gives the story another level of complexity – and stops his film from being a crude polemic.

He told acv he wants to act more in the future – and is also embarking on a new project, putting amateur film he took when travelling around India in 1999/2000 whe he was just 26, with new footage following a similar itinerary now.

Kumar feels the recent protests in many parts of India show that something is being stirred.

“I am incredibly proud – what gives me hope is young people coming out on the streets and protesting and forcing the Government to pause.”

‘No fathers in Kashmir’ releases tomorrow (January 24) in the UK…