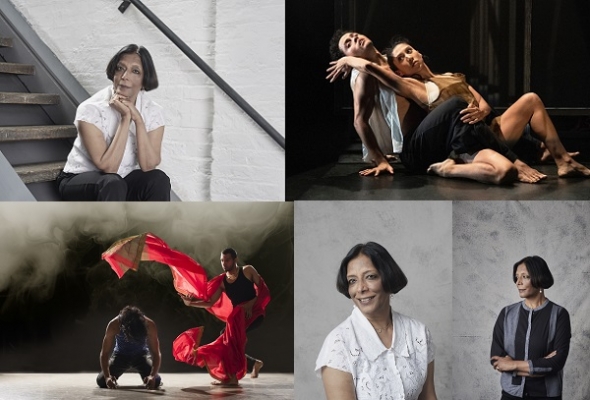 IT PROBABLY came as no surprise to many in the dance world that Shobana Jeyasingh was handed a CBE in the most recent honours list.

It was recognition of her considerable achievements, having created and established one of the country’s leading dance companies, Shobana Jeyasingh Dance (SJD) – which last year celebrated 30 years.

Jeyasingh, reacting to the award, told www.asianculturevulture.com: “I am really delighted to be included in this year’s honours list.

“I would like to thank the many who have supported my company over the years and believed in the capacity of the arts, and dance in particular, to be a force for good”.

You can next see her work on February 4 and 6 as ‘Material Men redux’ returns to the UK. On the Tuesday, you can see it at The Curve in Leicester; and on the Thursday it heads to Aberystwyth in Wales.

As a work it illustrates Jeyasingh’s creativity and breath of thought – it links the theme of colonial migration and labour in two personal dancers of great repute – however, one is a hop-hop artist, the other is a classical performer. Soorej Subramaniam is a bharatanatyam virtuoso and hails from a Malaysian family with Indian heritage, while Shailesh Bahoran first developed his art in the former Dutch colony of Suriname, located on the edge of the South American continent.

Jeyasingh told us: “It’s a work about the history of indentured labour which replaced the emancipated slaves and took both dancers’ ancestors out of India.”

Jeyasingh, a classically trained bharatanatyam dancer from Chennai, in South India, she set up SJD with the view to be creative as a choreographer and explore ideas and cultures and not be bound by orthodoxy or labels – such as bharatanatyam.

She told acv a little tongue-in-cheek: “Everything interests me, to tell you the truth!”

And her range of work bears this out.

This year sees her directing and choreographing the Opéra National du Rhin (Opéra d’Europe) in France in a work by Karthika Nair, ‘Until the Lions: Echoes from the Mahabharata’. Readers of acv may recognise the title – it is a work that Akram Khan has interpreted and Nair herself talked about her work with acv.

The show is a world premiere with a Thierry Pécou composition and Jeyasingh told us it was going to be an interesting experience.

“I am working with 14 ballet dancers who have just been introduced to the pleasures (and pain) of Kalari,” explained Jeyasingh.

(Also known as Kalaripayattu, the ancient martial art is still practised in Kerala.)

In 2021, SJD goes to Sadler’s Wells in London and widely recognised as the home of British dance. It’s a work inspired by Baroque composer Monteverdi and Mohammed Fairouz is part of her creative team for that production. The American Fairouz is regarded as one of the most exciting talents of the time.

Her most recent creation was daring, different and highly original. Something of a sequel to her 2018 ‘Contagion’ , ‘Staging Schiele’ recreates the passionate lines and intensity of the early 20th century Austrian artist’s infamous nudes and self-portraits in dance.

Jeyasingh said: “Schiele (the artist) was a brilliant, disturbing and strange man. His draughtsmanship is breath taking. There is a sense of anxiety in his work which I found easy to identify with!

“When I was researching my last work ‘Contagion’ about the Flu Pandemic of 1918, I realised that Schiele was one of its victims at the age of 28 which brought him into focus.”

This work seems quite far removed the world of bharatanatyam and Jeyasingh takes exception to the idea she has moved from this world to the contemporary field of dance.

Her work is full of rich confluences, both east and west, and many would say it is what marks her out as a as a dance creative and one of Britain’s foremost choreographers.

Like many who inhabit this space in between cultures and forms, she thinks of herself as a cultural hybrid and is at pains to stress that there are no well-defined boundaries, either in the mind or in the practice of her art.

“I have never seen my journey as being from Indian classical to Western contemporary as if Indians are not capable of being contemporary?” She posed to acv.

“There is such a thing as Indian or Asian contemporary culture – one has only visit to a city like Mumbai or Bangalore or to talk to any young Asian in the UK.

“I have never seen my journey as being from Indian classical to Western contemporary as if Indians are not capable of being contemporary?” She countered to the acv assertion that she could be seen as moving from one to the other.

“There is such a thing as Indian or Asian contemporary culture – one has only visit to a city like Mumbai or Bangalore or to talk to any young Asian in the UK.”

She explained her evolution and her relationship with bharatanatyam as it stands today.

“My move was from choreographing using only bharatanatyam dancers and telling traditional stories to using a wider range of contemporary vocabulary and telling any story that I felt was relevant.

“Like many Asians in the UK, I am a cultural hybrid. However, my choreographic path is very rooted in my own personal history with bharatanatyam. It’s deep within my dance DNA.”

A former judge on the BBC ‘Young Dancer’ programme, she says it is heartening to see young people learn and perform bharatanatyam and felt that any artist must believe in themselves to progress.

“I have always loved bharatanatyam and relish seeing it performed with skill and flair.

“It is a great and physically empowering dance form with a highly political history. I was very moved by the dedication of young UK dancers who have decided to pursue Indian classical dance.”

She believes bharatanatyam will continue to develop and have a distinctive character here.

“Bharatanatyam in the West has the same trajectory as Indians in the West. Personal choices are made daily about integrity and translation. Bharatanatyam is in the same matrix,” she posited in the email exchange lsat month.

She has created some 30 works, has an international reputation and is widely regarded as one of the leading choreographers of our times – and now has a CBE, as if any further proof were needed of her illustrious career.

Yet rather typically and modestly, she avoids making any grand assessment.

Of her many and varied achievements, and asked to state by acv, she said simply: “To have attracted some truly amazing people as friends, supporters and creative partners of the company.”

And she offered considerable praise to those who work with her closely at SJD.

“When you’re in the thick of something it is difficult to stand back and analyse. The only thing that I can point to is that I have cared deeply about every dance work I have made, big or small and felt, ‘I could have done better, damn it’ at the end of each one!

“Success also depends on the team who actually do the ‘running’. I have a fantastic team at the moment headed by Moya Maxwell.

“I very much hope my company’s journey has been of some use to the dance sector in general and to anyone who is Indian, female and wants to a be a full-time artist.”

*This is the first in what will become a regular feature about personalities who made a significant contribution to British arts and culture…. Look out for more!

Privacy & Cookies: This site uses cookies. By continuing to use this website, you agree to their use.
To find out more, including how to control cookies, see here: Cookie Policy
← ‘Layla and Majnun’ – Grand and iconic ‘dance opera’ production of Asia’s ‘Romeo and Juliet’ premieres in the UK…
Jeffrey Archer and Abir Mukherjee ready to thrill at Asia House Bagri Foundation Literature Festival talk →