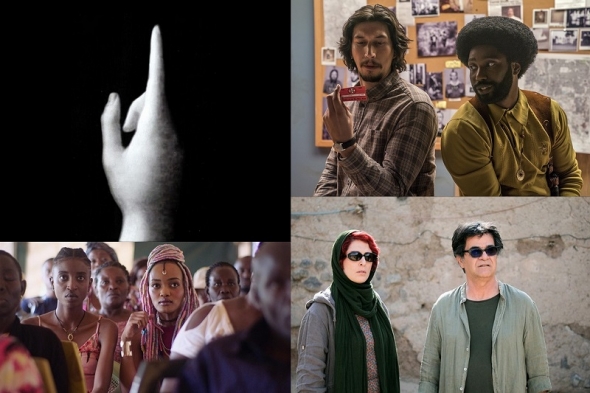 BlacKkKlansman
SPIKE LEE’S official return to the Cannes Film Festival (after ‘Do the Right Thing’ in 1989) is nothing short of an absolute triumph.
This is very entertaining fare, easy on the eye and the ear, great performances to boot, and generally a very satisfying cinematic experience all around.
But it would not be Spike Lee, if that is all it was. Taken together with the verbal assault he unleashed on the current incumbent of the US White House at the BlacKkKlansman press conference on Tuesday (may 15), it is a tour de force and its political power should not be lost on anyone.
John David Washington (son of Denzil) – as ‘Ron Stallworth’ (real and wrote a book about his experience) – and the black man who initially penetrates the Klan, is superb.
Likeable and conscientious – even to the point of protecting the klan leader (Topher Grace) and the Grand Wizard, he is a hero you very much believe in and there is able support from Adam Driver (Flip Zimmerman) as his police colleague and Patrice (Laura Harrier), girlfriend of Stallworth and an impressive Colorado State Black Student Union leader.
The final scenes of the real violence that erupted in Charlottesville, US, in August, give the film added power and poignancy.
Lee said he asked the permission of Susan Bro, mother of the murdered Heather Heyer, whether he could the use the footage of her being mown down by a car on August 12 last year. James Fields awaits trial for her murder. The film is set to release August 10 in the UK. Make a note in your diary – not to be missed!
It is quite simply the best film acv has seen in Cannes. Ever. Period. (In ten years).
ACV rating: ***** (out of five)
*Grand Prix Jury winner in competition

Rafiki
KENYA’S first film ever in the official selection is a charming, very watchable and beautifully composed film.
Touching performances from newcomers Samantha Mugatsia (‘Kena’) and Sheila Munyiva (‘Ziki’) help and the chemistry between them works.
Kena is a tomboy, who enjoys playing football and joshing with the lads, Zena is more traditionally feminine and has a mean girl gang crew who hang out and dance. This is a Nairobi you have not likely to have seen before. They both have boys sniffing around them but keep the powder clean until they meet and something sparks. What follows is entirely believable and watchable. Both have fathers running for political office, attend church and generally keep themselves to themselves. Of course, their love brings them into conflict with the church and their families. Ably directed by Wanuri Kahiu, this is a charming love story but it is played out against a climate of oppression and discrimination and the ending is both sad and possibly a bit grimmer than it need to have been, but don’t let that stop you, please. The anti-homosexual line is not inimical to Africa or just traditional societies; Kahiu shows compassion and understanding and has produced a film which deserves wide viewing. Its inclusion in the Un Certain Regard section should help it, and Kahiu said in a panel discussion in the US pavilion, that legal routes to overturn the ban are already under way.
ACV rating: *** ½

Le Livre D’Image (‘The Image Book’)
DIRECTOR Jean-Luc Godard is a legend; the last of the nouvelle vague – French New Wave – alive, let alone still working.
The film consists of a series of clips and scenes, some well-known, others less so. There is a narrative of sorts but Godard does not make it easy or simple. You have to invest a part of yourself in this and let the images do the work – there are words and phrases but little more.
Jury president Cate Blanchett said this film which was in competition could not be ignored – the jury could not stop talking about it once they had seen it. In fact, they kept coming back to it.
For the Godard aficionado, this is a must watch and is a powerful indictment of power and brutality and the cause of war, anywhere and everywhere.
If Godard is too esoteric for you and has been since the 1960s and the hits of ‘À bout de souffle’ (‘Breathless’) and ‘Le Mepris’ (‘Contempt’), this is probably not for you but acv would never stop anyone from engaging in anything difficult or complex.
Cinema owes a lot to Godard – we as an audience must respect that. If you watch this film from that perspective, it still has a lot to say.
ACV rating: *** (but a sort of average of what is an interesting film).
*It won a special Palme d’or – a recognition of Godard’s contribution to cinema as an art form. Bravo!

Behnaz Jafari (herself) and Jafar Panahim (himself) go to rural Iran, near the Turkey border to find out about a girl who has gone missing in ‘3 faces’

‘3 Faces’ (‘Se Rokh’)
JAFAR PANAHI, the director and writer of ‘3 Faces’ is banned from leaving his home in Iran and his daughter was in Cannes on Saturday (May 19) to collect his award for the best screenplay this year.
It’s tremendous opening – unusual, tense, and sets the film up brilliantly.
For the most part the film revolves around Behnaz Jafari as herself – the melting of fact and fiction is further emphasised by Panahi playing himself.
Jafari is a well-known actress and she finds herself in an awkward situation and needing to travel to the border of Turkey and Iran to find out about the predicament of a young woman who deeply admires her and in all likelihood, desires to follow in her footsteps.
It is a sort of mystery and Jafari and Panahi, who accompanies her on this journey find themselves coming up against suspicious rural communities.
The locals’ innate conservativism does not help – the young woman is outspoken, defiant and has won a place to attend a prestigious college where drama is part of the curriculum.
Panahi weaves an interesting tale, full of striking observations, and subtle digs at authority and the prevailing air of nativism and traditionalism. The three faces refer to the actresses – one who established herself before the Iranian Revolution, Jafari herself who remains a known face and the young woman at the centre of the drama who has yet to make a career.
There is a central conceit and once you know that, the pace of the film changes and it is less compelling, but up until that point, it’s a really astute and clever film and fans of Iranian cinema will not feel let down.
ACV rating: *** (out of five)
*‘3 faces’ won the best screenplay award in competition.

Privacy & Cookies: This site uses cookies. By continuing to use this website, you agree to their use.
To find out more, including how to control cookies, see here: Cookie Policy
← ‘A Doll’s House’ – powerful and insightful Tanika Gupta adaptation turns Ibsen classic into play about exotica, race and power…
Dev Patel and ‘The Personal History of David Copperfield pictures’ coming… →