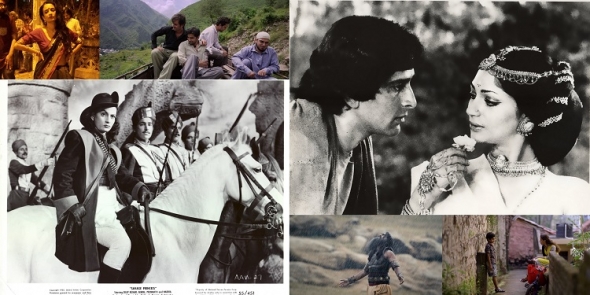 Tikli & Laxmi Bomb
BASED on his third novel of the same name, author Aditya Kripalani makes his helming debut with a gritty, considered adaptation. Shot with little flash – the pithy dialogue suggests it could easily work on the stage, despite the constant shifts in location – but rendered with gusto, his treatment for the working lives of a group of Mumbai prostitutes is a story of workers’ resistance and womens’ subordination, here in the form of power-abusing police, useless, manipulative pimps and violent johns.
If that makes it sound like a grim, depressing ride through Mumbai’s sex-worker economy, it isn’t, not least because of the energetic performances by Chitrangada Chakraborty as knife-wielding upstart Tikli and Vibhawari Deshpande as the jaded, worn-down Laxmi.
Slightly less interested in his sex-workers as individuals than what they represent, Kripalani doesn’t pity the prostitutes nor cast them in victimhood, nor does he make them ‘strong women’ archetypes or allow for exploitation (rape scenes are filmed out of shot).
Instead, he frames their inventive fights against pimps, customers and police as a toughly feel-good battle threaded through a filter of social-realism. Inevitably, things end more tragically than the inspiring set-up suggests, but for much of its running-time, ‘Tikli and Laxmi Bomb’ imagines a wholly different future for its heroines, one that refuses to observe the societal status quo, consequences be damned. (SC)
ACV rating:***½ (all out of five)

Shalom Bollywood
EVER heard of yesteryear Bollywood screen siren – Nadira?
Did you know she was Jewish – as were a host of other big Bollywood names of the last century: Sulochana, Pramila, and Uncle David.
British-born director Danny Ben-Moshe’s film is a wonderful ode to the cinematic contributions of India’s Jews.
Many of the stars were household names in their day and are still held with great affection and remembered very fondly. Ben-Moshe interviews many of the star’s descendants and paints a vivid picture of what Indian society was like in the early part of the last century.
He unearths some great characters too – Haider Ali – is especially affecting. The man behind the script of ‘Jodhaa Akbar’ (2008) and the son of Pramila cuts a somewhat paradoxical figure. Born to Bollywood royalty practically, and a product of a mixed marriage (his father was Muslim), he has had an uneven career, until Ashutosh Gowariker (‘Lagaan’ 2001), one-time acting colleague encouraged him to write a full script from his treatment for ‘Jodhaa Akbar’.
Informative, entertaining and with a voiceover from Ayesha Dharker, it’s a super slice of Indian film history, and few could be failed to be charmed by it.
For anyone interested in Indian film history this an excellent watch. Quietly too, it makes important points about diversity and plurality and suggests things were better than they are today on that score.
ACV rating:***½

Light Arose
IN HIS POST-SCREENING remarks, Ashvin Devasunderam, assistant director of the UK Asian Film Festival, described this Sri Lankan film as a cross between ‘Baahubhali’ and ‘Game of Thrones’. In many ways, that is a great description of this film.
We are in a time before the birth of Christ, in fact only a 100 years so after Buddha himself. Sri Lanka is staunchly Buddhist and the monks are the guardians and conscience of the ruling regime. It comes under threat from Tamil raiders and soon enough, they plunder and rampage their way through the island kingdom. The young king is spirited away and kept in a secret location.
Despite the Tamil rulers’ best and most vicious efforts to extract the necessary information, they fail. Twelve years pass. The king grows into a man and the population rally to his assistance. Technically accomplished and beautifully rendered, what it lacks is an emotional core. All the characters are sketchy and while the Tamils fight each other, we don’t really understand why the population is so loyal.
There are some grand fight scenes and the production values are on a par with ancient epics from Bollywood or Hollywood. Yes, the political subtext is a little troubling for a country which endured vicious political conflict between two ethnic groups for decades, but there are some powerful and unifying motifs and this is ancient history, so some cinematic allowances are inevitable and probably quite necessary.
ACV rating: ***

Side A and Side B
A COMEDY about Kashmir? Surely not. Well, not quite. Director and co-writer Rahat Kazmi’s latest film is a delightful, charming and poignant drama, mostly about growing up in a conflict zone.
In between the bombs and the bullets, a group of college friends/neighbours/cousins, are trying to make the most of their lives, and my, do they need their downtime… as anyone would in that sort of environment.
Focusing on an intrepid bunch of four friends (aka almost ‘Inbetweeners‘ style), who are bought together by a love of cinema, they bond over VHS Bollywood films but when a ban on TV and films kicks in (as it really did in 1994), the four aren’t to be defeated. What transpires is funny, wholly believable and richly entertaining. It ends perhaps on a more strained note. But as Kazmi, whose ‘Mantostaan‘ featured in the festival last year, said in the Q&A afterwards, it’s a beautiful place with an intelligent, cultured and educated people. They deserve better. And this film is a love letter to the people of Kashmir – and one that will touch a lot of people.
ACV rating: ***½

The Summer of Miracles
FIRST-TIME director Prasanth Vijay has produced a story of rare originality. A nine-year-old boy, Anand, retreats into his own (scientific) world, and for a while his mother and older brother go along with it. The latter gets fed up of the charade and demands his mother stop indulging him. Into this mix comes a college-attending teenage female cousin. The young boy and his female cousin bond, and share each other’s intrigues.
At the heart of this tale, set in Southern Kerala, is the spectre of childhood mental health. There is a long shadow cast by the father’s absence. He has gone missing in action as an official in Maoist-insurgency affected Chhattisgarh (some 1,500 miles to the north). All the family feel the loss, but have to get on as best they can.
The acting is very strong, and Anand, played by Chandra Kiran GK, is excellent in his debut film and has garnered many plaudits, as has the better known Reina Maria, his mother in the film. Sweet, a little drawn out, but ultimately intelligent and questioning, this is a film for those who like something different and unpredictable and a film that is reflectively cerebral.
Acv rating: ***

Siddhartha (1972)
FROM the famous novel by Hermann Hesse and of the same title, this film is a deep and spiritual examination of the unconventional life. The central character is the Shashi Kapoor (1938-2017) as Siddhartha and his female co-star is Simi Garewal, a starlet at the time and who graced the festival with her presence. Set in the time of the Buddha himself (c600BCE), it’s philosophical and a gentle and generally absorbing watch, aided by the sumptuous cinematography of Sven Nykvist (1922–2006), who had worked with the legend that is Ingmar Bergman. It hasn’t dated too much and its tale asks all the big questions without offering any obvious answers.
Kapoor, almost impossibly handsome, is wonderful and Garewal, the shimmering beauty, is a great foil. Their scenes of physical intimacy shocked India; Garewal is topless in one, but it is all very subtle and hardly noticeable by contemporary standards. Garewal in a talk with a handful of journalists the previous day told us that she was extremely nervous for that scene, but Kapoor put her at ease by simply saying: ‘You’re beautiful’.
Unexpectedly, Karan Kapoor, Shashi’s son with Jennifer Kendal, turned up to the screening at the Courthouse Hotel in Central London. His brother, Kunal, appears in the film as Siddhartha’s own son. It was something of a reunion too with director Conrad Rooks’ widow, Janet, joining Karan and Garewal in the tribute to the late Shashi, who died late last year and would have celebrated his 80th birthday the day after the sreening on March 17.
Acv rating: ****

For listings and info: http://tonguesonfire.com/

www.asianculturevulture.com is a digital media partner to the UK Asian Film Festival (March 14-24).