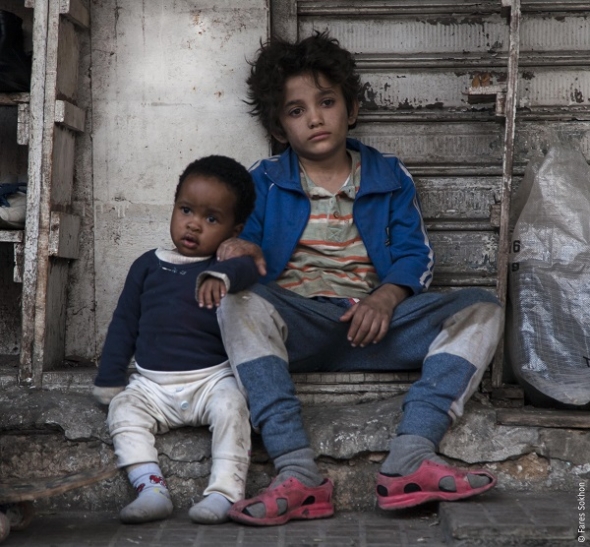 LATER this evening, a film called ‘Capharnaüm’ gets the full red carpet treatment as a world premiere and it will be a proud moment for Lebanon.

Director Nadine Lakabi is hardly a newcomer, but she trained in the country (unlike many from the Arab world who studied filmmaking outside and often in the US). Her first film ‘Caramel’ was a big hit and first made waves in this country, at the London Film Festival in 2007.

Labaki took advantage of a placement with the Cannes Film Festival itself in 2004 after coming to prominence in her own country, making music and commercials.

‘Caramel’ premiered at Directors’ Fortnight (Quinzaine des realisateurs) at Cannes in 2007, and this is another one of the official selection sidebars along with Critics’ Week (La Semaine de la Critique, in which Indian film, ‘Sir’ screened a couple of days ago – we have interviews with director Rohena Gera and two principle cast).

Set mainly in a hairdressing saloon, ‘Caramel’ dealt with very personal issues for its largely female characters. Conflict and the politics of the region were subtle protagonists but Labaki’s skill was to weave this into the very personal narratives of her creations, examining love, loss, desire, expectations and dreams.

Her second film, ‘Where do we go now?’(2011), in which she also featured as an actress, made it to the next section down from the main Competition film at Cannes, entering the Un Certain Regard (UCR) section.

This is the section in which ‘Manto’ by Indian filmmaker and actor Nandita Das had its world premiere.

The point is that Labaki has gone successfully from Directors’ to the UCR category and now onto the main competition and is up against the likes of Spike Lee (‘BlacKkKlansman’), Asghar Farhadi (‘Everybody knows’) and the veteran Jean-Luc Godard (‘Le Livre d’image’. (We will have reviews of all three). These films are all eligble for the Palme d’Or – Cannes’ biggest prize and awarded by the jury and headed by Cate Blanchett this year. It is presented at the closing ceremony, which this year since the festival started on Tuesday, ends on the following Saturday (May 19).

Not bad for your third film and you can see the progression.

The main point being that you must engage with Cannes’ less prominent (in media terms that is) sections – Directors’ and Critics’. Both these uncover major finds like Labaki and if you come from a country, where the local film industry is struggling for recognition of any sort, and you have a decent film you could aim to submit it to these Cannes sections.

Derek Malcolm, celebrated former Guardian chief film critic makes this point in our interview with him. He says British filmmakers only want to be in the Competition section, but if they set their sights at Directors’ or Critics’, they could have more success. Once you are in the line of vision of Cannes’ official eyeballs, you can graduate to the bigger and grander selections, just as Labaki has done.

Her latest film ‘Capharnaüm’ (also spelt ‘Cafarnaum’ & ‘Capernaum’) is something of a departure from here previous projects.

More serious and sombre in tone, perhaps, it features a 12-year-old boy who takes his parents to court, arguing that if they did not have the wherewithal to bring him into this world, why did they?

A powerful question in itself – which no doubt this evening’s world premiere will go some way in attempting to answer – and throws a spotlight on children everywhere who lack love, health care and education. Who can we hold responsible for their plight?

*There are a lot of filmmakers in Cannes screening their work and then proclaim their production was shown in Cannes – yes, but not at Cannes.
There is a subtle but very important difference. Many filmmakers and producers can take their films to Cannes but can only screen it at Le Marché du Film, a recongised and supported marketplace. ‘You pays your money’ and get a screening.

Films such as Labaki’s ‘Capharnaüm’ in the highest section – Competition, Nandita Das’ ‘Manto’ in the UCR, and Rohena Gera’s, ‘Sir’ in Critics – are all official selections and permitted to carry the Cannes Film Festival emblem on their opening credits. They really did screen their films at Cannes and are recognised as such; others are using the Cannes Film Festival marketplace mostly to draw attention to their work with us (the media) and often potential producers and distributors. #KnowyourCannesFilmFestival

**There’s a lot of stuff in editing at the moment from our #Cannesacv18 video interviews and we will post to the site as when they are published…STAY TUNED/SUBSCRIBE HERE!

Privacy & Cookies: This site uses cookies. By continuing to use this website, you agree to their use.
To find out more, including how to control cookies, see here: Cookie Policy
← SXSW 2021: Madame Gandhi wins music video award at SXSW festival – a global star in waiting…
ACV Bird Eye Review Show Episode 11 (March) Girl Power edition – ‘The Girl on the train’; Bombay Begums and Leeches (Bandra Film Festival 2021) →