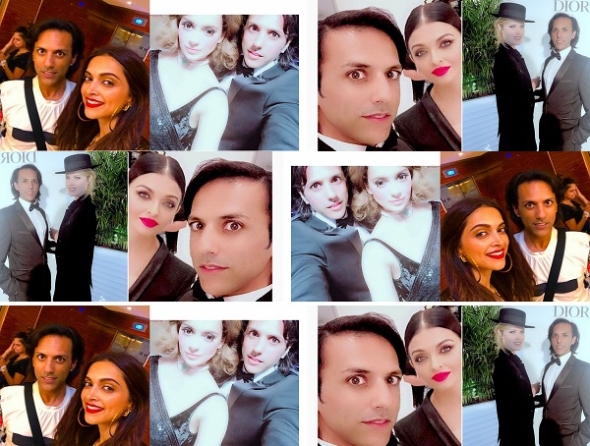 Best seen on some internet browsers on desktop or tablet…sorry!

WHILE the big guns of Bollywood certainly had their moments at the 71st Cannes Film Festival – most noticeably on the Red Carpet there, another lesser-known actor got in on the act and posted a range of pictures with global stars.

London-based Prashant Kapoor is one of the actors in ‘Boogie Man’ a British feel-good-song and dance movie that had its world premiere at the UK Asian Film Festival in March.

He was in Cannes not only to promote his film to the world’s film press and cinema distributors, but engage in some marketing assignments and seek out casting directors for his own future work.

That he did, but he went far beyond his brief and managed to bag valuable time with not only with Bollywood leading lady of the moment – Deepika Padukone but the Queen of the Croisette herself – Aishwarya Rai, who has been there for L’Oréal Paris as an ambassador for more than 10 years.

Kapoor spoke to us the day after about that now infamous selfie with Padukone at the Martinez Hotel. That short clip is here – the full interview is below.

He didn’t stop there and has to have one of the most celebrity/supermodel/starry Instagrams of all Cannes in 2018.

He thinks of them not as selfies but fan moments.

“The selfies weren’t fan moments. They just followed on from my chats to all these people about my film screening and an interest in what I do, as well as me liking their work.

“So actor-to-actor meets really – albeit they are superstars and I am small compared to them.

“An abiding memory would be, getting the opportunity to meet talent and get advice and be part of the one world we belong to: films,” he told www.asianculturevulture.com

A producer as well, he made the most of his Cannes experience – his third in all.

“I was also talking to other film companies about collaborations on film productions.”

Some of his ‘work’ in Cannes…

So I was doing a photo shoot on a bike at #Martinez, for #UnitedCruiser, when this beauty sashays by, on her way to @lorealpro @lorealmakeup and tells me what to do! LOL!!! I was so embarrassed. Nearly fell off the bike. And she was gracious to take a selfie and angle it! #Humble and #Beautiful. I guess it helps, when you tell her you’re an actor with a film screening in Cannes!!!!! I’m sooooo smitten (and its showing). Ps I’ll post the bike pic once the shoot is over. Back to the grind! Isn’t life just awesome! #Bollywood #Hollywood @deepikapadukone #instalike #instafollow #cannes2018 #fashion #actors #monsieurcannes

(5) Lea Seydoux: She was the Bond Girl in Sceptre

(6) Irina Starshenbaum: She was the actress of the film that is in the official selection at Cannes called Leto. I was at the official after party.

Also from the world of fashion

With the legendary @michaelcostefr what a humble and amazing human being! #cannes2018 @martinezhotel #monsieurcannes #marylebone

(7) Ellen Von unwerth – Big name in the world of fashion – check her instagram account out (https://www.instagram.com/ellenvonunwerth/). I met her at the Dior/Madame Figaro party

@ellenvonunwerth my friend Ellen. She is the super photographer and creative director, who shoots the best. She did Rihanna’s cover album for Talk That Talk. Just go on her Instagram, she needs no introduction! She said she’d love to use my face for a feature, ‘it’s vulnerable/handsome’ she said ☺️☺️☺️☺️☺️☺️☺️☺️☺️☺️ I love ya Ellen. #Cannes2018 #stylist #celebrity #cannes2018 #fashion #models #vogue #dior #instafollow #instalike #magazine #actor #casting #EllensVON @dior @madamefigarofr

(8) Eva Herzigova – Supermodel! I met her at the Dior/Madame Figaro party

Privacy & Cookies: This site uses cookies. By continuing to use this website, you agree to their use.
To find out more, including how to control cookies, see here: Cookie Policy
← ACV Bird Eye Review Show: Horror and spook – ‘Mumbai Diaries 26/11’, ‘Uravidam’ and ‘Bhoot Police’
Venice 2021 (wrap): Awards for ‘Happening’; Penelope Cruz; Jane Campion, Maggie Gyllenhaal, Erik Matti; John Arcilla and Paolo Sorrentino’s ‘The Hand of God’ among others… →