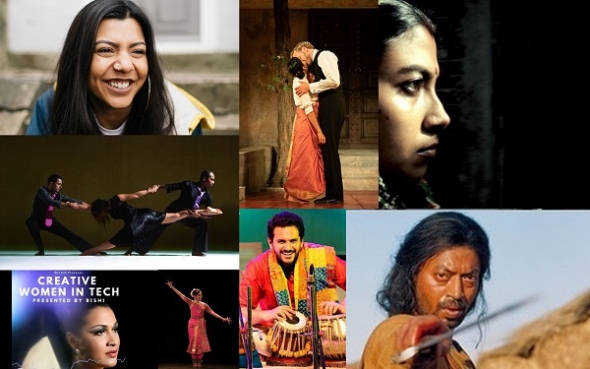 ONE OF the festivals that has enjoyed much growth over the last few years is about to go digital this weekend.
The Women of the World Festival will be online over this Saturday (May 16) and Sunday and is being partnered by the BBC Arts’ Culture in Quarantine initiative to make it the first, WOWxBBC Festival.
Among the contributors are Julia Gillard, the former prime minister of Australia; Afua Hirsch, author and broadcaster; Angie Le Mar, comedian; Tea Uglow, on LGBTQIA+ and Covid-19 heroes; Dr Devi Sridhar, Professor and chair of Global Health at the University of Edinburgh; Baroness Sayeeda Warsi, former Conservative cabinet minister; Charlie Brinkhurst Cuff, head of editorial at gal-dem magazine; Asma Elbadawi, basketball player; and Ebuni Ajiduah, on hairstyling; and among the compares are Kieran Yates (pictured) and Nihal Arthanayake.
The shows will stream on a BBC online platform (see below).
WOW was created by Jude Kelly, when she was director of the Southbank Centre, just a little over 10 years ago. It is now run by the WOW Foundation of which Kelly is the head. She will be introducing the programme this weekend and WOW will be hosting a 24-hour Global Virtual Festival covening women and girls right across the planet share their experiences from June 27-28. WOW Festivals have taken place across six continents with editions in the US, Brazil, Wales and Pakistan.
For WOWxBBC – https://www.bbc.co.uk/arts
Full programme on the above and more on WOW24: http://www.thewowfoundation.com

Not to be missed on Friday (May 15) is Asif Kapadia (pictured) in conversation with Stuart Brown of the BFI on the much admired and loved actor Irrfan Khan, who died last month.
Kapadia cast Khan in the lead role of his Bafta-award winning ‘The Warrior’ (2001) and it paved the way for Khan to make it big both in Hollywood and Bollywood – a rare feat. It is a live discussion, free and part of the BFI at Home programme. You can catch ‘The Warrior’ on the BFI Player. In July 2013, Kapadia and Khan shared a tremendous conversation at the BFI Southbank as part of the London Indian Film Festival that year. Watch that here.
Khan first spoke to www.asianculturevulture.com at the Cannes Film Festival in 2013 – when his film ‘The Lunchbox’ premiered there. He spoke to us several times about Indian movies he starred in and was one of the earliest followers of acv on Twitter. More about all that in our obituary.
Khan appeared ‘Jurassic Park’, ‘Life of Pi’, ‘Slumdog Millionaire’, ‘Maqbool’, ‘Piku’, among others.
You can watch Friday’s (May 15) conversation at 7pm (BST) – click here.

Hot off the press is the news that the London Indian Film Festival (LIFF) is to go digital over the summer from next month.
The fest is launching now with a screening of all the winners of the Satyajit Ray Short Film Competition, organised by LIFF. Among the high-profile past winners are Neeraj Ghaywan who presented the award-winning ‘Maasan’ at Cannes in 2015 and whose ‘Shor‘ won – and Subhashish Bhutiani whose ‘Hotel Salvation’ got a BFI release in 2017. His hard-hitting thriller ‘Khush’ won in 2014. ACV has hosted two events at LIFF, one marking five years of the festival, and another marking the 10th last year – look out for those too!
You can see the Satyajit Ray short film winners from London Indian Film Festival at Home – https://www.loveliffathome.com/

Anjana Vasan was the star of Tanika Gupta’s adaptation of the classic Ibsen play, ‘A Doll’s House’ which was staged at the Lyric in Hammersmith, London last year. She was nominated in the best actress category at Evening Standard Theatre Awards.
Now there’s a chance to see the production online on the theatre’s Youtube Channel from Wednesday next week (May 20). The play was recorded in its last week at the Lyric last year. It will be available free for a limited time on this day (See below for details) – and the theatre is encouraging donations to its Lyric Recovery Fund.
ACV’s Suman Bhuchar awarded the production five stars and described it as “moving” and very telling on “Imperialism, exotica, race, and colonial politics with some fine performances”.
Gupta’s transposition of the play to the Calcutta of 1879, and the mixed marriage between ‘Niru’ (Vasan) and ‘Tom’ (Elliot Cowan) and her friendship with Dr Rank (Colin Tierney) highlights the points of contention within British Imperialism, as well as the deep sense of identity and agency Niru exerts within own her marriage – making it still for many, a feminist classic.
‘A Doll’s House’ available online from next Wednesday (May 20) 2.30pm (BST) to 12am – see here.

Shobana Jeyasingh is one of the country’s best-known international choreographers and her company launches ‘SJD shorts’ on Sunday (May 17).
Excerpts of ‘Faultline’ – which was regarded as one of the top 10 new dance productions in 2007 – will feature and there will be a live conversation between Shobana Jeyasingh herself and Guardian dance critic, Sanjoy Roy about the production.
Jeyasingh said: “Created in 2007, ‘Faultline‘ was a response to the 2005 London bombings and the spotlight it threw on young Asians.
“The angst, coolness and swagger that I found in Gautam Malkani’s book ‘Londonstani’ was a source of inspiration.”
The live broadcast follows an earlier podcast about the production with contributions from Malkani, composers Robin Rimbaud, Errolyn Wallen and filmmaker Pete Gomez. You can check the podcast here.
‘SJD shorts‘ live broadcast – Facebook, Sunday (May 17) 7pm (BST) https://www.facebook.com/ShobanaJeyasinghDC

Malavika Sarrukai is regarded as one of the leading practitioners of Indian classical dance and presents the digital premiere of ‘The Unseen Sequence’ this Saturday (May 16).
This film – made by the eminent filmmaker Sumantra Ghosal – explores three central narratives – the history of bharatanatyam, Sarrukai’s own personal journey and the director’s own discovery of classical dance. Next Tuesday (May 10) Sarrukai, and Ghosal will discuss the film with Akhila Krishnamurthy moderating.
Malavika Sarrukai ‘The Unseen Sequence’ 9pm (Indian Standard Time; 4.30pm (BST); 11.30am (EDT). Go to Alaap Concepts on Youtube.

Coming up on Friday (May 15) and part of the Saudha Ghazal, Thumri and Kheyal Festival is a live concert and talk with Sri Rohen Bose – a tabla player of considerable global distinction.
He is presenting an “experimental performance with poetry”.
Hosted by Saudha, Indian Society of Music and Poetry, and the Radha Raman Society, the two organisations have been running this online festival regularly during the lockdown. Ahmed Kaysher, Saudha director, said he was “overwhelmed” by the response to the live concerts and talk and said an even bigger and more global community was emerging from the initiative. You can tune into the concert and talk at 5-7pm (BST), on May 15 (Friday). Find it here.

Spotlighting women and non binary creators with her new podcast is artist Bishi. The singer, songwriter, producer and performance artist is launching the podcast to draw attention to women and others – who are both creative and involved with technology. Just a handful of ‘womxn’ occupy the top positions when it comes to delivering music and other creative enterprises – ‘Creative Women in Tech’ Podcast looks to plug the gap and provide a space where this problem and potential solutions can be discussed. ‘Creative Women in Tech‘ by Bishi see here

If you want to be included in our listings – tag us and use #acvlockdownlistings – or email editor@asianculturevulture.com and mark it as listings by 4pm Tuesday (May 19) for listings starting from Thursday (May 21) – thanks for reading, see you all again soon! 🙏🏾