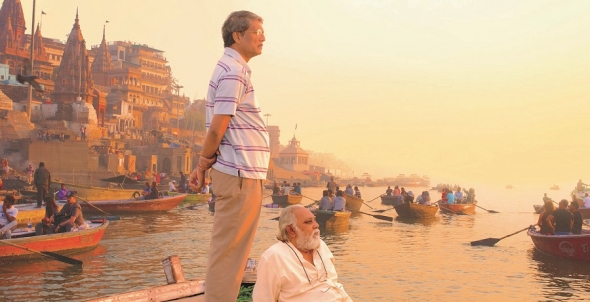 GENTLE, unassuming, funny and poignant, ‘Hotel Salvation’ (‘Mukhti Bhawan’) is a small gem of a film in many ways.

Set in the holy Indian city of Varanasi, the hotel at the centre of the film is one where people come to spend their last days, quite literally.

Director Shubhashish Bhutiani, who is just 25, is an exciting new voice – producing a film that crosses boundaries and expectations, but does so without compromising a genuine heart and soul.

It releases here in the UK on Friday (August 25) and is being distributed as British Film Institute (BFI) release which is something of an accolade in itself – not many new films get BFI distribution. http://asianculturevulture.com/?p=19112&preview=true

Earlier this summer, Bhutiani was in London with his father and producer, Sanjay, for the film’s screening at the London Indian Film Festival (LIFF, June 22-29) and the film first premiered at the Venice Film Festival in August/September last year.

“It didn’t really start off as a film,” explained Bhutiani to www.asianculturevulture.com. “It just started off from a place of fascination and not knowing something like this existed.”

Bhutiani had never been to Varanasi before and these establishments are not really hotels in the traditional sense – they are homes, albeit temporary ones until that final calling.

Varanasi is one of the oldest cities on earth and in essence it has not changed very much since humans first started congregating on the banks of the Ganga (Ganges).

“It’s got this crazy energy,” reported Bhutiani and anyone who has been there would surely concur.

His film basically tells a quite simple story – elderly father ‘Daya’ (Lalit Behl last seen in ‘Titli’), is a widower and feels that the time has come…to die.

He believes, like many Hindus, that dying in Varanasi will lead to a particular form of salvation. In Hindu iconography, Varanasi is paradoxically both the city of the death and light (its ancient name is Kashi). It is the (special) earthly entry point to the next life.

Caught in the middle is Daya’s son and his family. A troubled and overworked accountant type – ‘Rajiv’ (Adil Hussain) feels obliged to travel with his father to Varanasi.

Both his wife (‘Lata’ played by Geetanjali Kulkarni, best known here for ‘Court’) and daughter (‘Sunita’ reprised by Palomi Ghosh) join them for a few days. What happens between the father and son, and the rest of the family is what makes the film sing.

There is comedy, misunderstanding, distance, reconciliation, laughter, tears and quite a lot in between – even new romance, rebellion and thoughts about the other side – as reincarnation which is central to many traditional Hindu-influenced belief systems.

The Hotels or Bhawans (houses) Bhutiani depicts play into this but not in an overt way, in fact, there is surprisingly very little about religion as a western audience might understand it. The people in these establishments have only a vague feeling that their time is up.

“They have a sense that they are going to pass away, and to die in the city is seen as a success, it comes from a very positive place. They go seeking and finding salvation, it’s a most beautiful thing,” stated Bhutiani.

Shubhashish with his father Sanjay, who is also the producer. He quit his Bollywood producing role to help his son make films with heart and soul, he told us at the London Indian Film Festival.

What is at the heart of the film in terms of its relationships is the one between the elderly father and his son.

In the West, the battle lines are likely to be clearer and more obvious – Daya will do as he wishes (so long as he is physically and materially capable); and son Rajib will disavow his father’s actions and shun him.

But what Bhutiani shows so well is that in Asian culture generally, and perhaps most so in South Asian culture, the parental bonds remain very tight – and obedience and respect are but one side of the same coin that also strongly feature love and respect.

“There are a lot of expectations in these relationships and there’s a lot that is invisible and there are situations where you still have to take permission from your parents (regardless of your age or independence). You should never disrespect your parents or disagree with them.

“It was interesting for me to see this man (Rajiv/Hussain) as a very common middle-class man have these moral dilemmas, obligations and responsibilities,” outlined Bhutiani.

There is a good deal of comic tension between Hussain and Behl – and both deserve huge plaudits for the very skilful way they inhabit these likeable, but at times, irascible and anxious, people.

In some ways, Bhutiani is reflecting in a metaphorical way about the tensions within India, between the modern and the ancient. Varanasi is perhaps a very vivid example of this.

“It’s fighting to retain its ancient values with the modern world creeping in – it’s an interesting space and all of which help to serve the film in a very perfect way. Varanasi becomes a character in the movie and that is why it’s in the title.”

Above – Gaylene Gould, BFI head of cinema and events; Sanjay Bhutiani, Shubashish Bhutiani at the BFI/London Indian Film Festival screening…
Julie Pearce, head of BFI distribution, said: “We are so happy to be distributing Shubhashish Bhutiani’s charming and life-affirming first feature (following his award-winning short film, ‘Kush’) which we think will strongly appeal to UK audiences. He is part of the current new wave of fresh and exciting young Indian directors and is, without doubt, a talent to watch.”
Marina Fuentes from Cinestaan International Sales, which handled the sale to the BFI, said: “Rarely does a film make you laugh and cry at the same time, Hotel Salvation is one such film; deep, sublime and yet humorous, rooted in Indian values and culture.”

While the core of the film is ineluctably Indian, Bhutiani’s New York School of Visual Arts fellow graduates (who also worked on ‘Kush’), have brought an international dimension to the framing.

‘Hotel Salvation’s two directors of photography are Michael Mcsweeney, who is American, while David Huwiler is Swiss.

Bhutiani declined to disclose how much the film cost but he got around £140,000 (€150,00) from the production arm of the Venice Film Festival – the Biennale College, which supports newly emerging filmmakers.

His first film, a short, ‘Kush’ premiered at the Venice Film Festival and collected 25 different awards on its film festival travels and was even shortlisted in the shorts section of the Oscars in 2014.

The Biennale took on just four projects out of some 400 to help and as a feature made with the help of the Venice Film Festival, it was not eligible in Venice for any awards last year.

“Our prize was we got to make a feature film,” said Bhutiani who talked to www.asianculturevulture.com when he was in Venice last year.

But it is very different in style and temperament to ‘Hotel Salvation’; ‘Kush’ is a tense thriller set just after the assassination of Indian prime minister Indira Gandhi (1984) by her own Sikh bodyguards – and centres around the Police stopping a school bus along a forest road in North India and asking if there any Sikh children among the group. There is one called Kush… (Sailesh Ram).

By Tasha Mathur
FOR A FILM that surrounds the common practice of moving to the holy city of Varanasi to prepare for one’s death, Hotel Salvation is a surprisingly life-affirming slice of cinema.
This is exactly what 77-year old Dayanand Kumar (Lalit Behl) feels compelled to do after suffering from a series of recurring dreams of his own death.
Sensing his time on earth is coming to an end, he shares his wish to die in Varanasi to end the cycle of re-birth and attain salvation – a concept which is difficult to grasp for his over-worked son, Rajiv, whose black-and-white view on life criticises leads him to contest the idea.
Torn between his work and his family, Rajiv (Adil Hussain) reluctantly makes the journey to Varanasi despite many failed attempts at convincing his father to turn back down along the way. On arriving, the pair check into the small, dilapidated Hotel Salvation (Mukti Bhawan) where father and son finally begin to bond. Despite the morbid reasons they find themselves there for, they rediscover their relationship through many heart-warming moments which may have you holding back the tears.
Director, Shubhashish Bhutiani, successfully tackles topics of death in a humorous manner and in a way that is easily identifiable – as audiences may question their own relationships with their family.
In a world of increasing hate and violence, it’s easy to see why this pure, humbling film has won such critical acclaim and it will leave you feeling emotional – but hopefully, most importantly – appreciating the limited time we have with our loved ones.
ACV rating: **** (out of 5)

Privacy & Cookies: This site uses cookies. By continuing to use this website, you agree to their use.
To find out more, including how to control cookies, see here: Cookie Policy
← ‘The Personal History of David Copperfield’ (review) – An ode to the good life, not in material riches, but in spirit
Dev Patel and Armando Iannucci speak to acv on the red carpet for the world premiere of their film, ‘The personal history of David Copperfield’ →