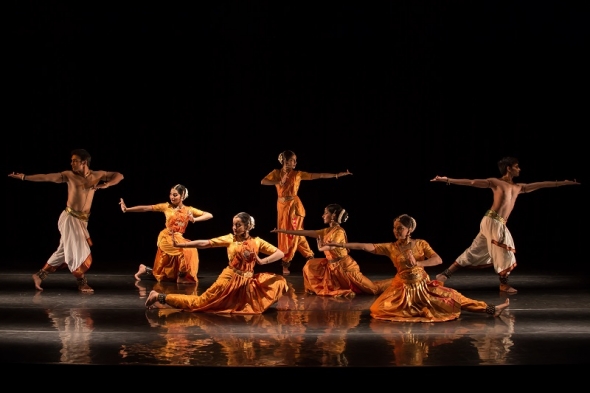 THERE are few greater figures in the world of bharatanatyam than Malavika Sarukkai, who graces the newly refurbished Queen Elizabeth Hall (QEH) at the Southbank Centre with a new production next Tuesday (April 24).

Entitled ‘Thari – The Loom’ it is essentially about – and inspired by – the sari, both as a garment of everyday wear and an item of clothing that often has a special place in the heart of its wearer.

Sarukkai is one of the best known performers of the Indian classical dance that is bharatanatyam. The predominant classical tradition of South India – Sarukkai is recognised as one of the most innovative and daring of choreographers and performers practising the ancient art form today.

Leaning slightly more towards choreography these days, having established her reputation as an outstanding soloist, she brings a mixed cast of five dancers and herself to perform Thari (pronounced Thir-ree). It will be a UK premiere and the first Asian dance or music event at the QEH at the Southbank Centre since its reopening.

Rupert Thomson, senior programmer for performance dance at the Southbank Centre, told www.asianculturevulture.com that inviting Sarukkai to appear so early in the new programme was both a way of recognising her past performances at the QEH and looking forward.

“It’s a very inspiring space and we want inspiring artists to respond,” he said.

He added that the most immediate impression of anyone stepping into the new space is that it is all “glistening”.

As for Sarukkai’s part, this will be no ‘ordinary’ bharatanatyam – if you are looking for something comfortably classical and comforting, this might not be it.

First of all, there are some poems and she has conceived the piece very closely with creative collaborator Sumantra Ghosal, who has penned the words to be spoken.

From her Chennai, South India base, Sarukkai told www.asianculturevulture.com: “I really wanted to raise the bar of Bharatanatyam, and I wanted to do something with a little more edge, which really requires hard work.”

It is also widening the form of bharatanatyam and encapsulating a form of human expression that can be – despite well-established impressions – both radical and different.

It was the sari that first inspired her and gave her the idea to produce a piece of work of a different dimension, while still being inspired by the discipline of bharatanatyam.

“It began strangely when I was reading this sociologist’s article on the sari and the way the author had described it, I could somehow see the sari dance in front of my eyes.”

Much of bharatanatyam is descriptive and narrative. In ancient times, the dance told religious stories and it still has a sense of imparting spiritual wisdom and knowledge.

Sarukkai has taken another step. She describes bharatanatyam as a language and ‘Thari – The Loom’ as going beyond it.

“It’s very different from the kind of work one expects from bharatanatyam, I look at bharatanatyam more like a language and so it’s really a question what sort of vocabulary do we use with this language.

“The challenge really for an artist like me is, how do I keep the core of what I believe classical dance form is – and yet improvise, and push boundaries. I have been very excited to work on this piece, it’s a lot of pure dance,” she revealed.

It is both closer to western contemporary dance and further away, she suggested.

The dancers embody a concept but that sounds too dry and clinical to acv – there is a strong sense of emotion, feeling and passion and the dancers embody a spirit, possibilities and a vision of something that perhaps connects us all and taps into another frame of our imaginations.

“The sari itself is much more than a piece of cloth or just a design. It’s also about the investment we have in it – with the sari we give it a certain meaning in our lives and rather than just looking at it as functional and something I just wear and then put away. It has more to tell, more to say, it’s important for us to relate to these things.”

During our conversation there is a great sense of excitement – this is the voice of a real artist if we may be able to assert this ourselves – someone searching for something beyond what might immediately be possible or even graspable.

On the one hand that sounds very highfalutin – but Sarukkai has a simple way of expressing her vision and methods.

“This really required hard work on the part of the dancers,” she explained. “I took them on the difficult but scenic route, there were a lot of surprises – it was a long and difficult road, but I believe that is what classical dance is really all about.

“You can take the short route, the aerial route, the inner city route, or a short and attractive route, or even the meditative one – there are many ways of doing this, but this is the astoundingly scenic route, and I told the dancers this – you’re driving through the mountains and you literally do not know what is going to be around the bend, it could be a fabulous view of snow or rhododendrons or a valley – that is what I believe the journey of classical music is all about.

“It is important we take the risks, and choose the harder route.”

Suffice to say we can’t wait…

All pictures except portrait: Shalini Jain

*Make sure you’re connected to us for our preview of Alchemy (the mini South Asian arts fest) coming to the Southbank Centre, (May 4-7).