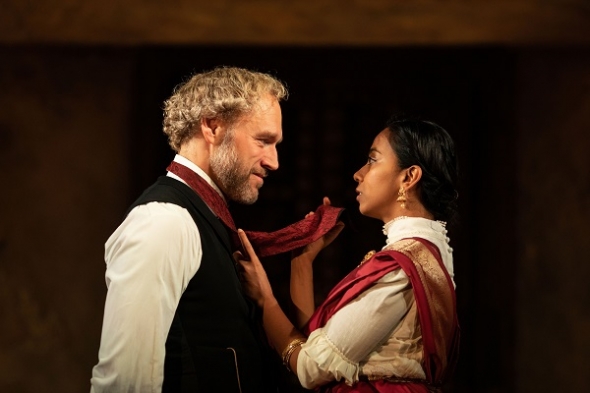 THIS is a very popular play written by the Norwegian great (Henrik) Ibsen about a woman who finds her freedom from being a wife and mother – and is considered to be a feminist classic and it is now transposed to India by the award-winning British playwright, Tanika Gupta.

‘Nora’, the main protagonist, becomes ‘Niru’ (played by Anjana Vasan) who is married to Englishman Tom Helmer (Elliot Cowan), a Victorian patriarch type character, who adores his “little princess” or “Indian skylark” and treats her like a doll and a piece of exotica. She plays up to this and it is not clear initially whether it’s acting or that is her real persona – although we never really learn about how they were attracted to each other.

She does things like secretly eat jalebis and when they kiss, he realises she’s consumed the forbidden fruit. They have a friend, an Indophile character, Dr Rank (Colin Tierney) who spends more time talking to Niru and is secretly in love with her, methinks.

In the programme note, Gupta explains her impetus for doing this: “I have long admired the play, ‘A Doll’s House’ for its powerful portrait of how a young woman – Nora – breaks free from the shackles of a patriarchal marriage. Being of Bengali origin myself, steeped in the stories from my parents and grandparents of the history of Calcutta (Kolkata) and the struggle for Indian independence, I transposed the setting to Calcutta, whilst keeping to the date of 1879, which opens the door to exploring additional power dynamics.”

When the play was first premiered at the Royal Theatre, Copenhagen, Denmark it caused sensation and outrage in equal measure, because married women didn’t challenge their husbands, and women had very little opportunities to be independent and they lacked financial freedom, and in this interpretation, Niru has to scrimp and save, and be thrifty with the housekeeping!

The set designed by Lily Arnold at the Lyric Hammersmith main stage is an interior of a middle class bourgeois household somewhere in Calcutta: sand coloured walls, with doors that go off on either side and also at the back of the stage. There is a balcony with a wonderful tree growing in the middle of what is a courtyard. On the top level stage left (as you look on) sits a lone musician, Arun Ghosh who composed the music as well as plays live during the shop, creating a haunting and mesmeric soundscape as the actions unfold.

The basic plot is that, Tom works in a bank he has been promoted so their money worries could be over and they can spend and buy extravagant Christmas presents. Tom is a Victorian patriarch type figure and Niru is shown as flighty, almost a child but she has a secret debt and as such open to blackmail – to say anything more would spoil your enjoyment!

Tom and Dr. Rank present two different sides of British imperialism – with Tom being the traditional imperialist who hasn’t really understood the country or people he lives with, while the doctor is presented as an Indophile – there is a wonderful scene when they are both arguing about their responsibility or duty to India. Another side plot which I enjoyed immensely was the story of the young widow, Mrs Lahiri (Tripti Tripuraneni) and Kaushik Das (Assad Zaman) and the scene between them is very moving.

Directed by Rachel O-Riordan this is her inaugural production as artistic director for this venue and the play has much to say about imperialism, exotica, race and colonial politics, with some fine performances.
ACV rating: **** (out of five)