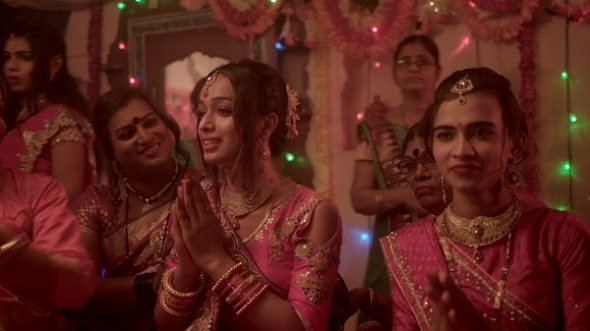 Film challenges conventions on both sides…

IT IS NOT very often we get to see or hear from people mostly marginalised and discriminated against because they want to change their sex.

The subject of Mayur Katariya’s first feature film is brave and bold.

Set in India, it charts the story of ‘Aashish’ who becomes ‘Aasha’ (Disha Yadav).

What is most impressive is Katariya’s calm and measured approach. A first time feature filmmaker, and based in Melbourne, his film is very much an Indo-Australian production.

He actually underplays the usual ‘dramas’ – the problems at school with bullying, name-calling and so forth and the fall out with family.

Her family remain loving (to a point) in the four walls of their house and are resigned to Aasish is giving away to someone else, yet there is also shame and embarrassment and when Aasha passes to near puberty, the situation becomes acute both for her and the family.

Her mother is more opposed than the father who maintains a quiet disapproval as opposed to his wife’s more vociferous criticism and unhappiness.

Voluntarily, Aasha takes herself to Hijra or Kinnar household run by a traditional matriarch who has undergone the full transition.

In this, ‘Nani Guru’ (Annu Ankade) maintains a strict household and frames their role as one of religion, piety and duty based on principles and as recognised by ancient Hindu scriptures – some would say it amounts to no more than mild extortion but Katariya chooses bigger battles to confront.

This way of life is exactly to Aasha’s tastes or character, while she eschews the easy physicality and flirtatiousness of friend, Sajan/Sajni (Vijya Laxmi), as a good student, she aspires to be someone and something quite different.

From her earliest days, she wanted to be a teacher and growing up in a middle-class, materially comfortable household, where her father was a priest and a man of scriptures and a Brahmin (high caste), she sees a different ambition for herself.

Nani is not comfortable and prefers to stick to convention.

Aasha is forced to look elsewhere and perhaps inevitably falls into a relationship with a man, ‘Kabir’ (Atmiya Patel) who is married and leading a double life, with a wife and kids on one side of the city, and Aasha as his lover, on another in a secret flat he owns.

He has money and the relationship is shown at least in the beginning as loving and caring – and Kabir supports and encourages Aasha in her ambitions. A touching scene is where Aasha requests to go to a restaurant as herself for the the first time in his company.

That he is Muslim and Aasha Hindu, only adds a further level of complexity to an already layered personal situation.

In this section of the film, Katariya’s romance is sweet and to be viewed on its own terms and works.

Like some relationships there are basic issues to be resolved and the fact they never are– means there is no future.

Without wanting to give the whole story away, Katariya’s tale is a common one within such a community – the radical step is that Katariya presents this as a way of being and not a condition or problem (and somewhat in quiet contrast to a small number of Indian films dealing with the subject) – and one simply complicated and exacerbated by those who wish to define normal, correct, and right.

Yadav, a transgender – as are 11 of the actors in ‘Ek Aasha’, gives a very telling performance – made all the more impressive by the fact this is her first film and she was just 18 when the film was shot.

As Katariya said following the acv reception and UK Asian Film Festival screening on Friday (March 29): ‘I could have made a film just to entertain but if you can change one person’s life…” Quite. ACV rating: ***½   (out of five)

www.asianculturevulture.com held a reception for the screening of ‘Ek Aasha’ at the UK Asian Film Festival, March 29 (festival in London runs until April 7). Video: https://www.youtube.com/channel/UCHE-Q4asdS2zKbu91mY32KQ (Subscribe and do not miss!)

For more on the film: http://www.ek-aasha.com/