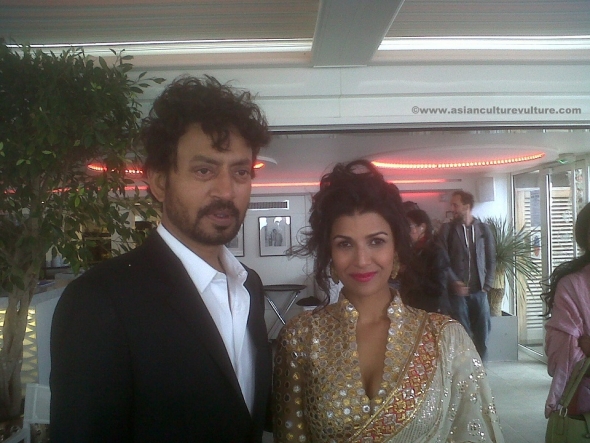 HE ISN’T your obvious choice as a romantic lead and yet the ‘Indian to go to’ for high class international productions, yearns for such possibilities.

“I keep longing to play love stories,” revealed Irrfan Khan, who is married and in his late 40s, to www.asianculturevulture.com at the Cannes Film Festival in May after the screening of the Indian-made, ‘The Lunchbox’.

It opens next month in India (September 20) and has been purchased for distribution here in Britain but no date has been set; while it will enjoy a North American premiere at the Toronto International Film Festival on September 8.

Khan’s appearance at the London Indian Film Festival (LIFF) in July and his masterclass at the British Film Institute with director Asif Kapadia were undoubtedly one of the highlights of that week-long extravaganza, spotlighting the best of independent cinema from South Asia.

Entertaining, relaxed, and very much willing to share, (even a hug with the wife of one besotted admirer!), Khan was the epitome of an actor at the height of his game and very comfortable in his own skin.

“I wanted to play a love story, that was my attraction,” Khan explained in Cannes, talking about ‘The Lunchbox’. “It’s a unique, very strong emotional piece.”

It’s a romance sparked by missing Dabbas (lunchboxes), where Khan, as Saajan, becomes the romantic lead, wooing a disillusioned and much younger  wife, Ila, played by relative newcomer Nimrat Kaur (pictured right), or is it the other way around…you will have to see the film, won’t you…?

Of course, it’s no conventional romance but there’s nothing sordid or sleazy about it – it’s skilfully crafted for a family-friendly Indian audience and thoroughly attuned to its moral sensibilities.

It will be a chance for audiences everywhere to enjoy a thoroughly nuanced performance, with Khan turning from curmudgeonly widower into a charmed and very believable charming, romantic.

It’s quite the transformation in a story by debut director-writer Ritesh Batra and eminently watchable.

“As an actor this is where your mind is, and the kind of stories you believe in – you want to bring them to the screen,” Khan added in Cannes.

So much so, that he has his first executive producer credit too on a feature in ‘The Lunchbox’.

“I wasn’t involved in the production, it was in supporting the film, compromising my price, things like that,” he revealed in Cannes.

‘The Lunchbox’ went down very well there and won an audience award, appearing in the influential critics section, which highlights upcoming global director talents

“It’s an emotional film, the emotions are universal and it will work anywhere, the film was designed internationally,” described Khan.

It has a raft of Indian and international producers who helped to bring it to the screen.

Expect to hear more from Khan on ‘The Lunchbox’ when it does hit these shores.

It’s clear that he enjoys these sorts of roles, where he gets the chance to explore perhaps our species’ most alluring subject.

“You want to come back again and again and explore different dimensions of love – this is something that doesn’t get old, you could be 70 or 90, but the theme of love never gets old.”

At the masterclass, he spoke about ‘Life In A Metro’, and a clip was shown from the film, which was something of a departure from your average Bollywood fare and was well received critically, but didn’t make too much of an impression at the box office.

Centred around a number of couples falling in and out of love and representing a modern and a more progressive and confused India (depending on your viewpoint), it gave Khan the chance to play a somewhat decent but uninspired man, who initially underwhelms the rather glamorous Konkana Sen Sharma character, but later grows on her.

For Khan, all these roles are indicative of something – an emotion with which he could connect. It guides all his choices as an actor in demand.

“It has to hit me somewhere,” he revealed at the BFI. “And inspire me to explore.”

It’s been quite a career to date. ‘The Warrior’ (2001) with Kapadia came at a time when he was increasingly frustrated with the choices before him – largely working in television.

“We had some money in television (producing), I told my wife, let’s leave it. I am not going back. Let that money go.”

He was told by some to stop ‘acting’  in the TV dramas in which he appeared and so when Kapadia pitched up, it seemed like he was being offered an escape.

‘The Warrior’ was his breakthrough movie, though an earlier association with Mira Nair on ‘Salaam Bombay’ had helped set him on his way.

He has been described as Nair’s ‘muse’ and most memorably appeared in ‘The Namesake’; in a role he found challenging, playing a much older Bengali immigrant who was on his death bed and had an accent and a way about him that was still ineluctably Bengali, despite having lived in the US for much of his life.

At the BFI, he remembered being challenged by the role and reassured by Nair that he had it in him to play. He did and it helped to increase the film’s emotional power.

There have also been notable roles in ‘Life of Pi’, ‘Spiderman’ and ‘The Darjeeling Limited’.

Born in Jaipur, the idea of acting as a career was much frowned upon in his family, but Khan said he was totally fascinated by films and actors.

He cited Dilip Kumar and Amitabh Bachchan as early influences and inspirations.

Winning a place to study drama in Delhi, he turned his back on his home and after graduating from the National Drama School, set out for the bright lights of Mumbai.

Still, his mother continues to encourage him to return to Jaipur, he revealed to the BFI audience.

Jaipur’s loss is the world’s gain.

Privacy & Cookies: This site uses cookies. By continuing to use this website, you agree to their use.
To find out more, including how to control cookies, see here: Cookie Policy
← The White Tiger film artwork – Inkquisitive (Amandeep Singh): ‘I have never painted on a car’ and going from being a ‘bedroom artist’ to a social media sensation… (video)
Bird Bites: Hymn; Letters to Earth Live; French like Faiza; Jibanananda Das Festival; Eastern Eye Actas; Rifco comedy… →