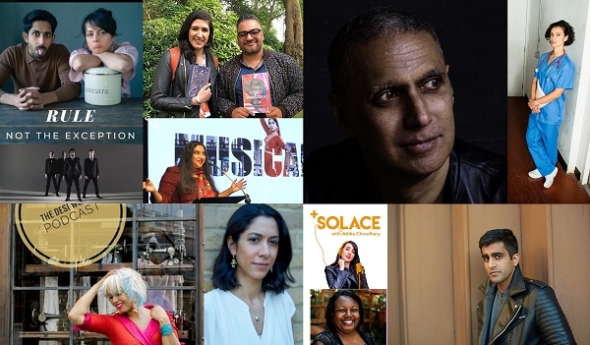 AS THE UK LOCKDOWN continues, a myriad of organisations, media and individuals are offering digital diversions. The list below isn’t meant to be comprehensive or necessarily the pick of the best – but there’s a lot of very good (and free) stuff here! – and is a general overview of what’s out there from organisations and individuals we have covered before on www.asianculturevulture.com and are somewhat familiar to our readership.

We hope to make this a regular feature while the lockdown and physical distancing continue – if you want to be mentioned – do feel free to send us listing information editor@asianculturevulture.com and mark it Lockdown Listing. Please attach a picture to your entry. It does not need to be high resolution (less than 1MB please) but helps if it is at least 600×400 pixels. You need to email us by 5pm on Monday, April 27 for inclusion in our next ACV Lockdown Listing set for publication on Wednesday, April 29. Let’s get on with our first now…

IT was announced yesterday (April 22) that composer and musician Nitin Sawhney (pictured right) has been appointed the new PRS Foundation Chair of Trustees.
He and other musicians are all set to perform on Friday (April 24) from midday (UK time) as part of the PRS’ live streaming show, ‘LCKDWN’ – in support of the PRS Emergency Relief Fund and supported by the foundation, PRS itself and the PRS’ Members Fund.
“The pioneering talent development the Foundation offers is more important now than ever and their collaborative and inclusive approach ensures that the success of the music they fund is driven by the exciting and diverse music creators who make it,” commented Sawhney, an Ivor Novello Lifetime Achievement Award winner. You can read more here about his appointment. For the live streaming concert: https://www.youtube.com/prsformusic

Writers Nikesh Shukla and Nikita Gill continue their writing clinics – catch them on Instagram live. Check in here with Nikesh Shukla. They last held Clinic 3 on ‘character’ on Monday (April 20).

Heritage Organisation, the United Kingdom Punjab Heritage Association (UKPHA) has just launched a series of talks (a virtual book club) looking at topics around Sikh and Punjabi arts, culture and heritage. It launched this week (April 20) with Professor Kim Wagner discussing his ground-breaking book, ‘Amristar 1919’. The talks go out every Monday at 5pm and you must register to participate on Zoom. Next week (April 27) sees Philip Deslippe discuss the history of Yogi Bhajan and his Kundalini Yoga and the Happy Holy Organisation. Author and BBC journalist Kavita Puri (pictured) discusses her seminal ‘Partition Voices’ on May 4. Last year, Puri spoke to acv about her book and Radio 4 series, ‘Three Pounds in my pocket’.

Asia House is four instalments into its ‘Art in Isolation‘ newsletter , showcasing talent from arts, literature and culture. It puts these out every Wednesday and this has a number of click throughs to content. You can also check in with its website. From the site you will see links to the body’s previous Bagri Foundation Asian Literature Festival. Among these last year was social media star Humble The Poet (pictured).

New on the block, and from a broadcast presenter – who has also worked for acv – is BBC journalist Attika Choudhary’s ‘Positive Solace’. It’s set to drop next week (April 28) and be a continuing series. It isn’t just about our current situation, but a whole lot else and has a long-term focus on happiness, well-being, mood and humour. Her first guest is psychiatrist, writer and filmmaker, Dr Kamran Ahmed, who recently wrote about ‘The Inner Critic: How to silence the negative thoughts that emerge in solitude’ for The Guardian newspaper. ACV’s parent company, Big Talent Media, is the sponsor of the first edition of ‘Positive Solace’. You can find out more and follow the episodes by following Attika Choudhary here.

Among one of the more recent to have started is ‘Rule Not The Exception’ with actors, Sagar Radia and Amrita Acharia – they started their podcasts with fellow ‘The Good Karma Hospital’ actor James Krishna Floyd on January 21. The pair told acv: “We wanted to create an inclusive podcast as a platform to celebrate, inspire and ignite honest conversations with under-represented creatives within entertainment and beyond whilst also showing how different individuals navigate diversity and inclusion through their careers.” They are 10 episodes in and their last podcast episode featured writer Nikesh Shukla on April 6. Sacha Dhawan, Mandip Gill and Priyanga Burford, Ruth Madeley, Kim Ngo (‘SAS Who Dares Wins‘ 2020) are among the eclectic guests already quizzed by Radia and Acharia. To listen go here.

A modern adaptation of ‘Romeo & Juliet‘, with Bally Gill (pictured) in the lead part, is being put out by the BBC which is marking the bard’s birthday today. The rising star spoke to us about his elevation as leading man just before its run began in 2018 – you can watch the Royal Shakespeare production here.

Medics are much in the news and Asian doctors are very much in the spotlight – Hampstead Theatre have made the medical drama, ‘Tiger Country‘ available to view free online. The play stars Indira Varma and is centred around an Asian woman doctor making her way in the world – especially in a very male professional environment. This is what Indira Varma told us about it in 2014 and you can catch it online here until Sunday (April 26).

Over at the BFI Southbank – catch up with many of the great Q&As you may have missed – Tilda Swinton and Bong Joon-Ho’s on the Oscar director’s 2012 blockbuster ‘Snowpiercer’, and Asif Kapadia on ‘Diego Maradona’ is another highlight. And you can see music and culture broadcaster Ashanti Omkar’s (pictured) introduction to Bollywood classic ‘Pakeezah’ which was presented as part of the BFI’s musical season earlier this year. Check in here to view

Sadler’s Wells, the home of British dance, continues to host a free ‘digital stage’ – its performances start on Fridays (April 24) at 7.30pm British Summer Time (BST) and can be viewed on the venue’s Facebook page. This week sees ‘An Evening with Natalia Osipova – Vaise Triste, Qutb, and Ava Maria’. The organisation also said it will host an online edition of its hugely popular Breakin’ Convention festival – which is regarded as the biggest festival of hip hop dance theatre in the world. ACV has covered this festival before when dancer and fashion designer (pictured) Saran Kohli premiered a hip hop dance work at the festival. On May 1, you will be able to see the 2018 edition, which marked two important milestones – marking Sadler’s Wells 20th anniversary and the 15th anniversary of Jazz re:freshed, a prestigious live jazz organisation. On Saturday, May 2 Breakin’ Convention presents a virtual festival across its digital channels, including highlights from previous festivals. Details of this are still to be announced – the 2020 Breakin’ Convention Festival would have taken place over the May Bank Holiday weekend next week. Sadler’s have also announced two other performance dates for May 8 and May 15. Check the website for further details.

The Southbank Centre sends out its newsletter ‘Culture Fix’ and has a running blog too. Among its recent offerings is author Malorie Blackman (pictured) in conversation, following the BBC1 adaptation of her hugely successful Young Adult Novel, ‘Noughts & Crosses’ which is about racism and racial dynamics in a world where white folks are at the bottom of the socio-economic heap. The Southbank also has ‘Culture Picks’ – a variety of selections from around the Internet.

That’s all for now – remember get in touch with us editor@asianculturevulture.com to send us your listings info and by Mondays for inclusion on Wednesdays… Keep flying high with us!

Privacy & Cookies: This site uses cookies. By continuing to use this website, you agree to their use.
To find out more, including how to control cookies, see here: Cookie Policy
← International Film Festival and Awards Macao (IFFAM): Lily James to appear in masterclass today and what’s coming to acv…
‘Homing Birds’ – Exploring the notion of home and identity with writer Rukshana Ahmad as curtain about to fall on new play (tomorrow) … →