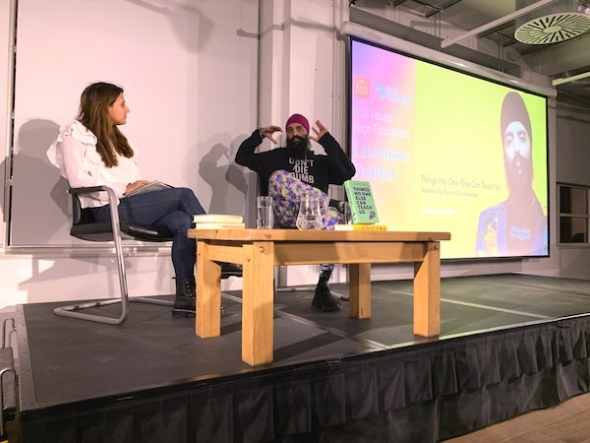 WITH nearly half a million Instagram followers, spoken word artist and rapper, Humble The Poet (Kanwer Singh) is described by many as a global social media sensation – although true to his stage name, he modestly rejects the term.

However, the fact that his first book, ‘Unlearn: 101 Simple Truths For A Better Life’, quickly became an international bestseller, shows how globally recognised he has become.

In the UK from his usual North America stomping ground – and on a short tour, he is here to talk about his latest book, ‘Things No-one Else Can Teach Us’; and he discussed his life and work with journalist, Nomia Iqbal, at Foyles Bookshop earlier this week (November 11).

He told the audience difficult but inspirational life stories to close out another year of the Asia House Literature Festival, sponsored by the Bagri Foundation.

As he shared his rocky journey to a packed audience, Humble The Poet revealed the trials and tribulations of quitting his teaching job to pursue his passion after being promised a record deal, which never materialised.

The year 2011 was one of the lowest points of his life – as he dealt with increasing debts and revealed how he distanced himself from his family and drank Nyquil (an over the counter medicine used to combat flu symptoms but crucially containing mildly sedative properties too) every night to help himself sleep, hoping his problems would fix themselves.

However, he explained how he pulled himself out of that dark place, by using his time to increase his output as poet, and fill out the persona of – Humble The Poet

“I was taking long walks and trying to figure out what I was trying to do with my own life and where my own responsibility was. I was done blaming other people for where I was.”

Sharing those ideas is what connected him to so many people who resonated with his philosophical thoughts and life lessons and a community of followers quickly began to form.

When many people suggested he wrote a book (containing his many homilies), he initially rejected the idea due to a lack of funds.

But once again, Humble The Poet took it upon himself to make it happen by independently raising the money, learning how to create and publish a book from scratch and ‘Unlearn: 101 Simple Truths For A Better Life’ was born in 2014, just two and a half years after his lowest point.

While his first book includes more pragmatic solutions to life’s hardships, his latest, ‘Things No One Else Can Teach Us’, shares Humble The Poet’s own raw honesty in the hope it will inspire others.

In a world that’s becoming increasingly rushed and stressful, it’s easy to see why so many people relate to Humble The Poet’s work, as he offers ways to be happy within ourselves and provides insights on things we may not have the time to stop and think. about much, if at all.

He provides a refreshing new perspective on how to deal with whatever life throws your way and the long queue to get his book signed at the end of the Q&A is testament to that as many shared their own challenges with him one-to-one., when given the opportunity.

Humble The Poet also revealed his next book will be on love and you can see him next in Leeds on Monday (November 18)…and he continues his tour. Check listing details below…

The event was the last in Asia House Bagri Foundation’s Festival of Literature, which began on September 3 with historian Dan Jones talking about his latest work, ‘Crusaders: An Epic History of the Wars for the Holy Lands’.

Along the way there were also talks also by Indian political and author, Shashi Tharoor, former Coronation Street actor Shobna Gulati and academic Koel Chatterjee, discussing Shakespeare after Gulati appeared in the ground-breaking all ethnic women production of Richard III at Shakespeare’s Globe; BBC journalist Babita Sharma discussing her first book, ‘The Corner Shop‘ having grown up in one and the cultural significance of a very British institution; an all-star literary line-up of Nikesh Shukla, Tanika Gupta, Vinay Patel and comedian Nish Kumar, and author Hanif Kureishi, among many others, sharing their knowledge and wisdom.

Asia House in an independent business and cultural hub dedicated to promoting better understanding and closer links with the continent of Asia and is based just off Oxford Street in the heart of London. The Bagri Foundation is one of the UK’s leading charitable sponsors, supporting a wide range of art and culture in the UK.