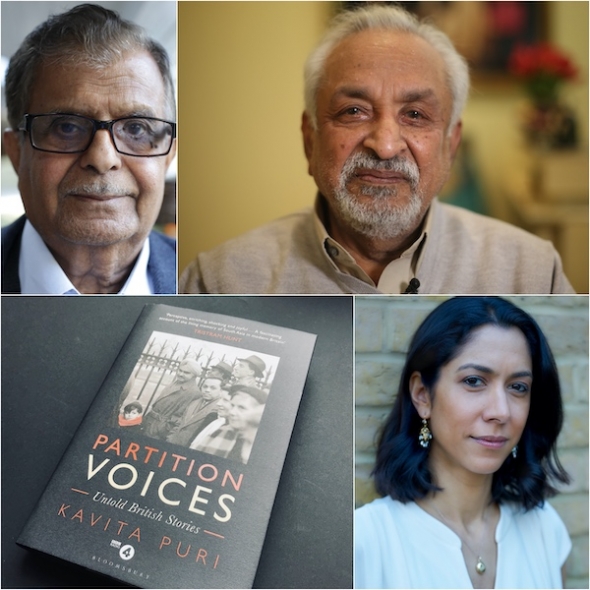 IT’S not just academics who record history and social change and it’s often overlooked how the media in the modern age can shape ideas and narratives about communities – and their hopes, dreams and fears.

Kavita Puri’s landmark BBC Radio 4 series ‘Three Pounds in my Pocket’ comes to an end on Friday (December 20). The three series are split into 3 episodes each and cover a period of British history through the eyes of several individuals, talking about their lived experiences.

It is a social history chronicling the lives of individual South Asians from the post-war period right up to the late 1980s. It talks of hopes, fears and successes.

The third series covers a period starting from the riots of 1981 (principally Brixton) – the resulting Scarman Report and culminating with The Satanic Verses controversy in 1988.

Puri’s long and deep engagement with some older Asians also led her to make another seminal BBC Radio 4 radio series about the subject of Partition and out of that came a book too – ‘Partition Voices’. Puri wrote an article in www.asianculturevulture.com about Partition.

Both the radio series and the book record the experiences of a generation who had memories of one of the most traumatic episodes in history. A million people are estimated to have died in the conflict and some 12-15 million were displaced and had to start over again in new emergent countries.

Thousands of women were also raped, abducted unaccounted for – and left for dead by the violence. The radio series won the Royal Historical Society’s Radio and Podcast Award and its overall Public History Prize.

In 2017, the book was published to wide acclaim – Tristram Hunt, the director of the Victoria & Albert Museum, described it as being “perceptive, shocking and joyful. Puri’s is a powerful and courageous book for multicultural Britain.”

Nikesh Shukla, author and editor of ‘The Good Immigrant’ wrote in the Observer, “Partition Voices is important because Puri does not flinch as she dissects the tumultuous event, never shying away from the trauma. We need a candid conversation about our past and this is an essential starting point.”

We caught up with Puri – a Cambridge Law graduate and award-winning TV executive producer previously – just ahead of the final broadcast of ‘Three Pounds in My Pocket’ and talked to her also about reaction too regarding ‘Partition Voices’ and what it might mean to young people today.

www.asianculturevulture.com (ACV); What does the third series of ‘Three Pounds in My Pocket’ on Friday (December 20) cover?

Kavita Puri (KP): “I am telling a social history of British South Asians to post-war Britain. The series are chronological.
This series is everything from how the decade saw a cultural flourishing with films like ‘My Beautiful Laundrette’; daytimers – the underground club scene; how the three pound generation were getting on in life after having been in Britain for decades; how the Tories were wooing the British South Asian vote; as well as dramatic events like the storming of the Golden Temple (1984) and the Fatwa against Salman Rushdie (1989).

ACV: How do you think a generation of British Asians – (who are not immigrants) react to the stories you tell in ‘Three Pounds in my Pocket?’

KP: This is their history. It’s also British history. They get to hear the stories of the pioneer generation who may be their grandparents or parents – what Britain was like when they first arrived, and how they were received; the struggles they had against racism and for equality – which paved the way for the next generations.
These testimonies are at times unexpected, heart-breaking and amusing. They also explore generational differences.
Again, other than hearing these stories within the family, this is not taught in schools, and there are not many mainstream books out there documenting this history.
As with Partition, the younger generation are incredibly curious and want to know more.
I have been contacted by schools and universities (here and abroad) to say they are getting students to listen to the series – and it is about time these voices are heard.

ACV: We couldn’t agree more – and it’s interesting that ‘Partition Voices’ has opened up conversations about a shared but not much discussed history, and was that part of the driving force to write a book like ‘Partition Voices’ to get people talking…?

KP: The idea came out of the first two Radio 4 series of ‘Three Pounds in My Pocket’ – which charts the social history of British South Asians to post-war Britain.
In the background of so many of the stories was the Partition of British India. Many of the people who came in the early years had lived through Partition and their lives had been hugely disrupted by it on the Indian sub-continent.
They came to Britain with these stories of trauma, loss and grief and kept them hidden away. With the 70th anniversary (in 2017), I felt strongly that if the testimonies of people who lived through that tumultuous moment in history were not excavated, we would lose them altogether. And their stories – of people who were once subjects of the Raj, and became British citizens, is part of British history. It needs to be told, remembered and understood.

ACV: Do you have a personal or family connection to Partition?

KP: My father lived through Partition. I had always gently tried to broach the subject with him, but it was only in the final months of his life that he started to open up about what happened to his family and what he saw. So this was very personal too.
Silence pervades so many Partition memories. The generation who lived through it and came to Britain were forging ahead, trying to build a new life in a new country, sometimes in a hostile environment, so there was little time to dwell on the past.
In Britain there is also an institutional silence about Empire, and its demise and so there was no public space for them to share their stories. And within families – on all sides – terrible things happened or were witnessed – and there is so much shame attached to these memories, that it was easier not to talk of them. I am just one of many of the descendants of the Partition generation trying to piece together the story of their family’s past. Once the production team and I started looking for interviewees we realised they were all around us. People among us who had held these difficult memories for so many decades, and still feel a profound loss of the land they had to flee, and remember a time where religious differences were not so pronounced.

ACV: Do you think the legacy of Partition and Empire matters to young British Asians?

KP: British South Asians have shared what they know of their family experiences, but also want advice on how to speak to elderly relatives who may be reluctant to talk. They are also interested by how the Partition generation grew up often amongst different faiths in undivided India. There is great curiosity amongst younger British South Asians. They have not been taught any of this history in school, and it is part of their identity.
British people have also opened up about their family experiences too.
There is a campaign spearheaded by Interfaith groups for South Asian History to be taught in all schools.
I agree it is important to explain the shared history and understand the connection between Empire and migration to Britain. There are over three million British South Asians today – and I feel it is only a matter of time before it will one day be taught widely, as this is British history.

You can listen to ‘Three Pounds in My Pocket on Friday (December 20) at 11am – you can find the other episodes here – https://www.bbc.co.uk/programmes/b065z2x3

Partition VoicesThree Pounds in My Pocket