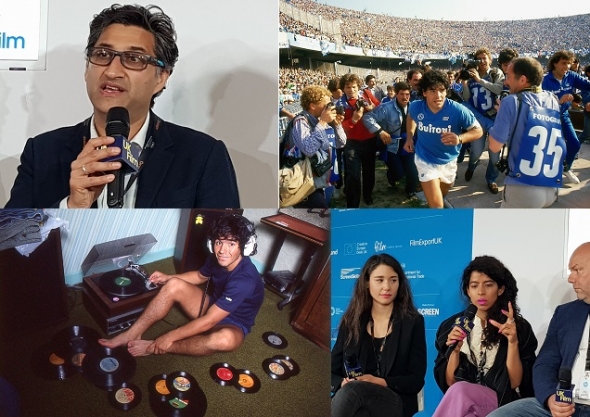 Death. Resurrection. Death. Resurrection…even director Asif Kapadia has no idea how the Maradona story will end, but it was one of just a series of questions he felt compelled to explore in his latest work which showed out of competition at the festival..

ASIF KAPADIA’S latest film ‘Diego Maradona’ which premiered at the Cannes Film Festival on late Sunday (May 19) evening is an absolute triumph in many ways.

Not least because it was a test of endurance and determination to bring the story of the world’s greatest footballer (since Pele) to the big screen.

While it took three years – as compared to five for his first documentary, ‘Senna’ (2010) and three also for his Oscar and Bafta-winning ‘Amy’ (2015) – which also enjoyed a Cannes Film Festival world premiere – the fact that Kapadia had to deal directly with Maradona, a living person and his entourage, made it all the more difficult and challenging.

Kapadia addressed the audience at the premiere shortly after the roll of end credits to his film in Cannes.

Some of the background to making this film was recounted in a highly entertaining and informative talk at the UK Film pavilion on the morning of the world premiere (on May 19).

British film journalist Kaleem Aftab moderated the talk with Kapadia, James Rees-Gay, producer of this documentary and others in the Kapadia stable, Paul Martin, a former football journalist, now sports documentary filmmaker, who first pitched the idea in 2012 and assistant producers and vital cogs in making the Maradona film, Lina Caicedo, of Colombian origin, who dealt with the footage emanating from Buenos Aires, Argentina, where Maradona grew up in a rough and impoverished part of the city; and Fiammetta Luino, who worked on the film that came from Naples in Italy. The documentary film is mostly in Spanish and Italian with English subtitles.

There is no actual footage of Maradona speaking to camera for the film – but Kapadia did interview the star several times and some of the audio does help to narrate the film.

Kapadia said it was not possible to arrange a time and location to speak to Maradona and just take a crew – as it might have been with common mortals, he intimated.

“It would be like they (his team) would say we didn’t mean this Monday but next. Maradona had his good days and his bad days,” Kapadia recalled.

The first interview and the last were very memorable for different reasons, he revealed.

In the first, just Kapadia and Spanish translator Caicedo went to see Maradona in Dubai.

While Caicedo sat opposite Maradona and talked in Spanish, Kapadia had to get closer to Maradona so that star could be heard speaking properly into the microphone placed on a low coffee table.

“I was sitting on the floor at his feet, Diego’s feet, I thought I could give them a lick, luckily he was wearing shorts, I wasn’t really listening, I couldn’t understand anything anyway, and I thought, would he mind if I touched his left foot, (an opportunity arose), I literally grabbed them, he pushed me off – he doesn’t really like being touched – but I had touched his left foot, and I’ve not had that urge with anyone else, I haven’t washed my hands since,” he joked.

In the final interview and for it to flow naturally, Kapadia described how several people were involved – listening remotely, translating into his ear simultaneously – and transcribing at the same time and those assisting were based in London and Buenos Aires, while he and Caicedo where in Dubai, and talking to Maradona face-to-face.

“It had to be done without him realising,” Kapadia disclosed of the elaborate lengths they went to keep the star talking without him being self conscious of being ‘interviewed’.

The team initially set about finding all the original footage they could – hours and hours of it.

Many people told them it would be virtually impossible – what was out there had been seen already, but what many did not know was that Maradona had a two-man camera team following him in Naples during his time at Napoli.

Martin had heard about this footage as a journalist and the team were able to track down Juan and Gino who had shot the original film.

Rees-Gay told the UK Film pavilion audience: “It was unfiltered, of its time and real behind the scenes footage, which you wouldn’t get a modern sportsman to allow you access to (these days).”

The footage in ‘Diego Maradona’ is intimate and revealing – you really do get a sense of a young man being thrown into a boiling cauldron.

Naples was a difficult city and the young Maradona and his streetwise ways did not always lend itself to the best company.

Kapadia explores the Camora (regional mafia) connections and inevitably his downfall in drugs is also documented in the film.

It’s an epic journey both on-screen and off and cinematic – one could almost see a fictional film being made about the making of Kapadia’s ‘Diego Maradona’.

Caicedo described going to meet a slightly shady figure who had some footage of Maradona when he was at home in Argentina.

The ‘collector’ as he described him refused to travel to the UK and insisted they come and see him in his home in Buenos Aires.

Caicedo described the first time she met the collector: “He came into the café in Buenos Aires in sunglasses, tattoos and with a brief case.”

She said they had to look up him again, when they realised he had an important bit of footage no one else had. This time she was accompanied by Kapadia.

“Most taxi drivers told us they didn’t want to go there,” recalled Kapadia.

“But then this cool woman called Roxanne, who was smoking out of her car window, took us,” remembered Caicedo.

They managed to get the film they required but it wasn’t an easy trip and Kapadia said: “It wasn’t the area Maradona actually came from, but it was close, so you can imagine the journey he made.”

The talk took place at the UK Film Pavilion in Cannes on the morning of Sunday, May 19.